Billy Meredith was the George Best of his era. A footballing legend who also managed to combine a bribery scandal with a glorious playing career as well as being a pioneer of trade union organisation in the modern professional era.

Billy was a former miner from Chirk, near Wrexham, where football in Wales was at its strongest.

This area was, after all, where the Football Association of Wales was formed in 1876 with meetings in Wrexham and Ruabon, making it the third-oldest football association on the planet.

By then Wrexham was a well-established football club, having been formed in 1864 by cricketers wanting to play a sport in the winter. Wrexham AFC remains the third-oldest football club in the world.

Billy Meredith left school in 1886 aged just 12 to work as a pony driver in the nearby Black Park colliery. His brother, Sam, was already a football professional with Stoke and Billy had the talent to follow him.

All the Meredith brothers played for Chirk, which won the Welsh Cup no fewer than five times between 1887 and 1894.

The gifted winger made his debut for his hometown club in 1892 but soon moved on to play as an amateur for Manchester City. He still worked in Black Park Colliery for a short while.

Meredith eventually turned professional in January 1895. In his first full season for Manchester City he was the club’s top scorer, even though he played on the wing – and in those days it was never easy to score from there.

He very quickly became renowned for the quality and accuracy of his crosses, no mean achievement on the muddy quagmires that passed as playing fields at that time and with a heavy leather ball.

Billy Meredith was captain of Manchester City when they won the FA Cup in 1904, the club’s first major honour. He was loved by fans, both of the club and of Wales – for whom he had now gained his first international cap.

In that year the “Welsh wizzard” was voted the most popular player in football. He was loved by fans and applauded wherever he went. Yet just a few months later he was charged with attempting to bribe an opponent and banned for a year and a half.

However, such was his popularity – and skill – that this pioneering Welsh superstar returned to the game and continued to play at the top level until he was nearly 50 years old. 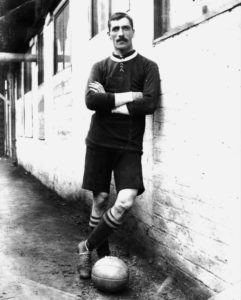 In 1921, after a long spell with Manchester United, he returned to Manchester City where he played with a casual grace and elegance – usually with a toothpick clasped firmly in his mouth.

His last league match was against Newcastle United in the semi-final of the FA Cup. He was 49 years 245 days old, making him the oldest player ever to appear at that stage of the competition.

In his amazing career Meredith played 390 games for Manchester City, and 365 for Manchester United. He gained 48 caps for Wales. It could and should have been many more but club commitments and the scarcity of international opportunities in those days limited his list of honours.

He scored 11 goals for Wales – a record at that time – and made his last appearance for his country when he was 45 years old.

But Billy never forgot his origins. He was a founder member of the Players’ Union – the first attempt at forming a union for professional footballers – and was often in conflict with the football authorities.

When the FA banned the Players Union in 1909, Meredith and many of his Manchester United colleagues refused to abandon the Union, earning for themselves the sobriquet of the Outcasts FC.

A compromise was eventually reached before the start of the new season but Meredith, ever happy to speak up for the underdogs, continued to advocate for the rights of the players.

Meredith is remembered and given prominence in the “national” football museum in Manchester, which has attracted a million people in just three years.

In tribute to Billy Meredith and all the footballing greats that have graced the Racecourse for the past 150 years, I want to see a new national football museum for Wales based in Wrexham.

Here, without doubt, is the sport’s “spiritual home” and it’s doubly fitting because there is no national museum in the north east of the country.

The campaign was launched by local Plaid Cymru activists and gained the backing of local football enthusiasts.

Wrexham AFC board members expressed support and everyone was encouraged when a deal struck last year between the Welsh Government and Plaid Cymru specifically mentioned the need for a feasibility study for such a museum.

Now a tender for the feasibility study has been made public and, unfortunately, the Welsh Government has moved the goalposts somewhat. Rather than a football museum for the North it now talks of being a sports museum somewhere in Wales.

This opens the possibility of placing a generalist museum in Cardiff, where there’s already a hall of fame in the Arms Park.

This would miss the point of any football museum as spectacularly as Paul Bodin’s penalty.

This is not a box ticking exercise by some Welsh Government bureaucrat. This is about ensuring that the north east is recognised for its pioneering role in promoting what has become the national sport.

More concretely, Wrexham Council already has one of the most extensive collections of Welsh football memorabilia that’s been on show recently at the town’s museum.

England has a national football museum in Manchester, Scotland has one in Glasgow and it makes perfect sense to locate our national museum in Wrexham. As well as recognising the historic importance of the area in developing football in Wales, it would also re-balance the economic benefits towards the North.

When you visit the museum in Manchester you can’t help being struck by the amount of coverage footballing pioneers such as Billy Meredith are given.

We need a national museum here in Wrexham to showcase the achievements of people like Billy Meredith as well as those of Gareth Bale as they continue to make history.

I’m not a football fan by any stretch of the imagination, (I always wondered what the fascination of men playing with balls is about!) but given that it is such a popular sport, and Wrecsam seems to be the epicentre of football in Wales, and with such historic links to the game, that it seems to be the natural place to locate a museum dedicated to football in Wales. And isn’t football also the national sport of North Wales? At all costs, Cardiff must be prevented from having yet another national institution. Cardiff already has enough, and the potential economic… Read more »

Being primarily a ‘rugger bugger’ I have never given it any thought to be honest! However, even despite of this briliant article I would be supportive of this 100% anyway!

I think Elfed Wyn Jones needs to be asked to start up a campaign with petition to let the hard of listening in the Senedd take note of what the people want as oppossed to their own self interests!

I’m already waiting in the queue to sign! Every little helps to bring our people together as a nation.

I support this idea, entirely, but I think if you want it based in Wrecsam you will have to be more grassroots and come up with ways of funding it independently of the Senedd, until the Senedd takes notice and chips in. Depending on the Welsh Government to do it for you will likely result in A. it being elsewhere, or B. it not manifesting or at least not in the form described in this article. You could begin it in a very small building, call it Amgueddfa Pêl-droed Cymru, and move on from there.

I don’t care where the museum is as long as it includes the Wales Street Homeless Football Team and moreso as the World Cup in this will likely come to Wales by 2019 … whilst all eyes were on players representing Wales elsewhere and being welcomed home on buses and by ceremonies, homeless players were representing Wales at the national street homeless football World Cup in Glasgow. The Ladies Team got through to the semis and took 3rd place losing out to Argentina and the men’s team beat off stiff competition to win the Men’s Shield …. these competitors then… Read more »

Joy, send me details of the fundraising efforts. I’ll share through @PodcastPeldroed

Thanks for the info Joy – would be glad to share more info if available.

It’s a good idea in principle to have such a museum in Wrexham. Museums however tend to be expensive to run and it would probably need considerable subsidy either from Welsh Government or the FAW. I can’t see the local Council having any spare. Remember they turned down a theatre that was to be paid for by the Arts Council of Wales. The English football museum that is reputedly doing well in Manchester was originally located in Preston but it didn’t work there and had to move. Museums are generally in cities as they form clusters of attractions. In towns… Read more »

The museum needs to be part of an effort to redevelop the Racecourse bringing the ground up to international standard, otherwise it will attract very few visitors from outside of the north east of Wales.

And ask C. Coleman or young Bale to perform the opening ceremony (so that it doesn’t come across as just a North Wales thing). And make sure Oswestry Town FC (defunct) from over the Dyke get a mention.

The Homeless World Cup was held last week in Oslo. Both the Ladies and Men’s tournaments are held at this event. Here are the Welsh Ladies Team, and their mascot Michael Sheen(!), lifting the Cobana Bowl after wining the Tournament by beating the USA 6-2 win over USA. Third place went to Belgium and fourth Norway! And well done to the Men’s team who came 3rd.
https://www.instagram.com/p/BYqUqwVg5gI/