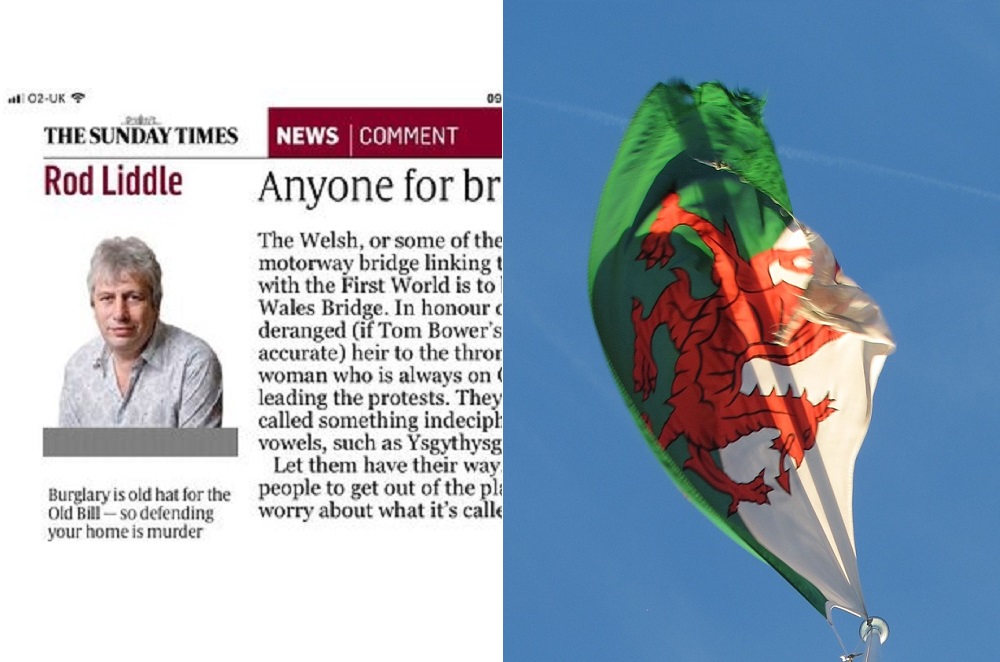 As a member of the London Welsh community and a mother tongue Welsh speaker, I am assailed by the anti-Welsh racist content that the mainstream British English media spews out on a depressingly regular basis.

Rod Liddle’s hateful diatribe against Wales and the Welsh language in the Sunday Times, the most recent example, was particularly offensive (see below, in case you were lucky enough to miss it), which I imagine was precisely his aim: 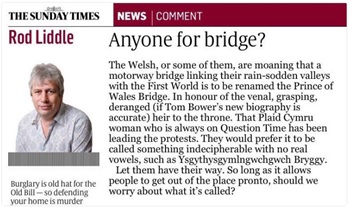 At the inevitable risk of being labelled ‘thin-skinned’ and ‘lacking a sense of humour’, let me call Mr Liddle’s shoddy journalism out for what it is: racism.

The fact that we Welsh may be indistinguishable from English people in our appearance makes no difference.

Under the Equality Act 2010, ‘race’ includes ‘ethnic or national origins’[1]. A legal case from the 1980s[2] established that the essential characteristics of an ethnic group are (1) a long shared history and (2) a cultural tradition – both of which the Welsh people have in abundance.

Other characteristics include a common language or geographical origin. A more recent case from 2001[3] confirmed that the Scots and the English are separate racial groups, defined by reference to their national origins.

Therefore, under the UK’s main anti-discrimination legislation, it is highly likely that the Welsh people qualify as a distinct racial group as well.

Putting it in perspective

On Sunday night I (along with 18 others, according to this BBC article) made a written complaint about Mr Liddle’s article to the Independent Press Standards Organisation (IPSO).

In order to prove my point that anti-Welsh racism is not taken seriously, or worse seen as ‘harmless banter’, by the English media, I asked IPSO to imagine for one moment that Wales was replaced with China in this story, and that Mr Liddle had referred to the area surrounding Shanghai as “rain-sodden” and somewhere to get out of “pronto” back to the “First World”.

Imagine if he had suggested that the Chinese people would prefer their hypothetical bridge leading from Shanghai to Osaka, a city in neighbouring Japan, to be re-named the “Chingchongching Bridge” (written in “indecipherable” Chinese characters, presumably).

We all know that there is simply no way that this type of racist content would have ever seen the light of day and rightly so. In fact, Mr Liddle would quite likely be facing legal consequences by now.

So why are the same decent editorial standards and cross-cultural respect not applied to Wales and to our unique culture and ancient language?

It is partly because the English media has got away with belittling and insulting us for so long.

The English media needs to understand once and for all that anti-Welsh racism, as with any type of racism, is not acceptable.

We Welsh and our non-Welsh friends (I was touched at how many English people openly shared our outrage on Twitter) must continue to voice our criticism on all social media platforms.

However, this alone is not enough. We must complain directly to the offending media source and the relevant media authorities which govern it.

As media consumers, we also have the option of withdrawing our support of and subscriptions to media sources that publish anti-Welsh racist content.

I, for one, will not be buying another copy of the Sunday Times until it issues an apology for Mr Liddle’s article.

Simply put, it must not be worth their while for English media sources to publish anti-Welsh racist content in the first place.

Are you with me?

Or in Welsh – Ydych chi efo fi? (Six vowels – every single one of them real)