I wouldn’t normally care about an article in the Express. If I want to read some fiction I’ll usually pick up a novel.

This is, after all, a ‘newspaper’ that predicts the worst winter in 100 years. Every. Single. Year. I suppose that at some point in the next 100 years they’ll be able to claim that they got it right.

But since I have a starring role in their latest attempt to peddle anti-Welsh propaganda, I’ll make an exception in this case!

‘Homeowners in a part of Wales have been asked to ditch English names for their properties and rename them in Welsh,’ says the subtitle.

I won’t link to the article so as not to encourage their efforts, but you can see it below: 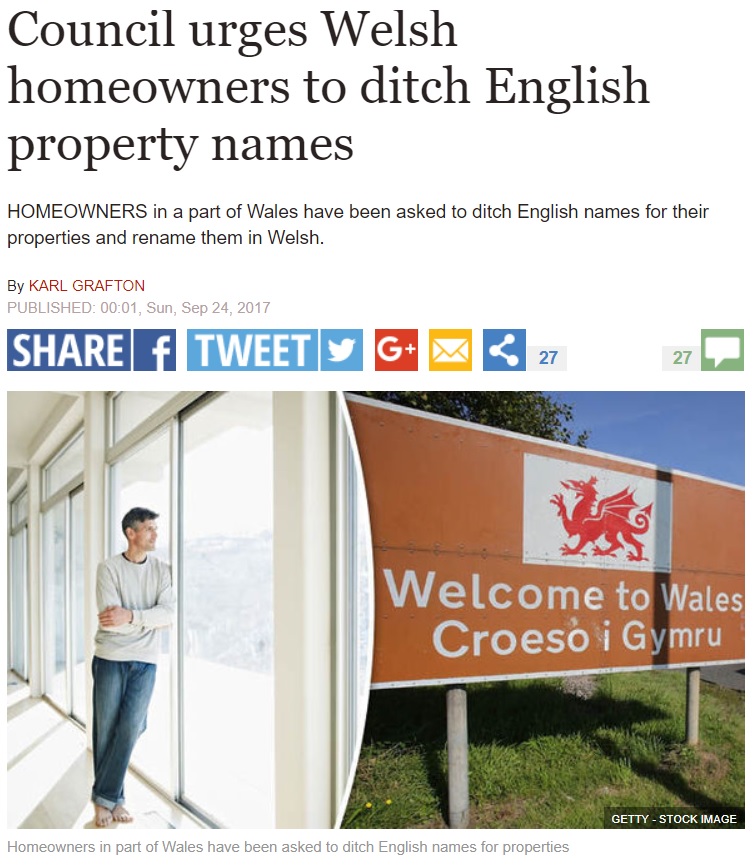 The joke here is that the headline and subtitle are entirely contradicted by the actual text of the article, which has clearly been copy and pasted from other sources.

All they’re doing is writing to owners who apply to change historic house names – be they in Welsh or English – and give them a chance to reconsider.

The homeowner can they decide to crack on anyway and the council won’t stop them. Not quite 1984, is it?

I pop up near the end of the article because I recently moved house and changed its name from English to Welsh.

But this was nothing to do with a request by the council –  we’re a Welsh speaking family and so it was completely natural for us to give our new home a Welsh name.

The quote was a response to a question –asked by a Daily Post reporter – about whether I thought people moving to Ceredigion should keep Welsh house names, if possible.

It’s presented in the article as a quote supporting a Ceredigion county council policy that does not in fact exist. Since the article goes on to name my house and its location, it’s also rather dangerous.

It’s quite clear that the Express have simply spotted an opportunity to twist the facts to serve an anti-Welsh agenda.

And they’ve succeeded. The comments on the article are full of people who have read the headline and think that the council’s policy is ‘racist’.

Even if the headline was correct (it isn’t), the accusation of racism is very clearly daft because language is nothing to do with race. There are people from various ethnic backgrounds who speak English and Welsh.

I don’t suppose that very many people on Nation.Cymru are avid readers of the Express. But this is a good example of how easily they manipulate their readership, and something we must guard against.

It’s also telling that a newspaper that makes the ‘defence’ of a majority culture its prime objective has no qualms about twisting the facts to attack a minority culture which has nowhere else to go.

The article will probably be on the MailOnline by the end of the day for the same reason. And the facts will be one step further removed from the truth.

With papers and website like the Express in circulation, the wonder isn’t that the masses were tricked into hating minority cultures – it’s that it took this long to happen.

Let people think that Cyngor Ceredigion does this. If it prevents even a single person from moving to Ceredigion who has no interest in learning Cymraeg or who will raise children in English in a place like Tregaron, than it is entirely to the benefit of Wales that people believe this is the case.

The Express – like the Gaurdian, Times, Mail, Sun, Mirror; Telegraph, Star, etc – are not to be taken seriously…They’ve all an agenda.

I used to think that only Anglo Brit institutions were anti -Welsh relying on MSM , BBC to spread their toxic supremacist views across England and into those pro English elements in Wales. Since advent of internet and various blogs it becomes evident from the bile spewed out of mostly anonymous people scribbling on those blogs that the common herd in England has absorbed these messages and now favour stances which take a thoroughly negative view of the Welsh people and their language and culture. So nothing new or shocking about the Express’ content. Indeed I suspect the rags like… Read more »

if your saying – the common herd in England – as meaning the Establisment playing us all I agree. If your infering those of us living on council estates in England and looked on as shite by the powers that be – No! Most of us wouldn’t even know there’s another language in, Cymru. We’re “shafted” just like you.

This is what you said in another comment Kim :

“Vaughn Rodderick, who I enjoy listenning to says -“All I would say is that there is an ignorance of Wales in England that goes back over a thousand years,”
I would disagree with him on ignorance being the cause: from my experience, as an Englishman, at the unwashed end of our society, it’s actually “total contempt”… That’s a big difference.”

Let’s have some consistency.

I meant the “total contempt” ot the Establishment. Thanks, for bringing your comment to my attention.

I suspect that the hostility and/or supremacy is a far more common characteristic than you are willing to acknowledge. The “common herd” is no doubt being shafted but part of the cunning “all in it together” posture is to demean and oppose any part of the UK or its populace that ventures to offer an independent view of life. Best example currently is the fashion for having a go at Ms Sturgeon because the nationalist cause and her eloquence are seen as threats by that mainstream and the working ( and non working ) class in England have absorbed those… Read more »

kim I agree with you, there seems to be a lot of simplistic bile shouted out here about English people, its not English people who are our enemy its the weakness of Welsh politicians, Welsh people and the British colonial mindset which has twisted the Welsh psyche. Many English people contribute as much to this country as the natives. TBH I have never had any animosity from English people in England about my accent ( and its strong) or being Welsh, usually they are interested in it. But boy have i had stick from my fellow country men for using… Read more »

Well, hang on: I’m English myself, and I can categorically confirm that the English are taught to think of themselves as the dominant UK group, and we are also taught that ‘our’ money funds everyone else and that ‘we’ have the right to impose rules (immigration rules, notably) on others without ever being subject to them ourselves. Our tabloids shriek about how everyone is taking us for a ride, we’re told we’re the silent majority (hardly silent, as the hateful comments that keep cropping up about anyone foreign or Welsh), and we get sold endless crap about how we aren’t… Read more »

Interesting insight, thank you for sharing and for being honest. Such has been the utter contempt and ridicule I have been regarded with as a Welshman in England, I am actually heartened to hear that there are pro-Wales English people. What you have said here chimes perfectly with my experience. Please keep up your support as pro-Wales English people are an incredibly strong ally.

Sorry, I don’t buy that. Actually it sounds a bit like the Englishman who walks into a Welsh pub and everyone – who was speaking English upto that point – starts speaking Welsh. Also, that your average English person – “are taught to think of themselves as the dominant UK group…”….What? As a blackman it’s rare that I’ve come across race bigotry or superiorty – with most English people – in my 62 years. Please note I use my own actual name and don’t hide behind a pseudonym – which always makes me think that some use an alias to… Read more »

Whether you buy it or not makes absolutely no difference to me. What I am telling you is a fact. I have experienced racist anti-Welsh comments in EVERY single place I have lived in England. And I have lived in the north and the south and London. Predominantly from middle class English people if you want me to be more specific. What difference does it make whether I use an alias or not? Your subjective anecdotal view carries no more weight than my own because you use ‘a real name’.

Ifan Morgan Jones: diolch am yr erthygl. A da iawn chi am newid enw’ch cartref chi. I gather something similar has been discussed in our hallowed cynulliad. The loss of old and ancient place names and house names has been noticed by the our place name society (i think ‘llennatur.com’ has a link). They have made representations to the baw in the bae. The united nations charter on minority rights actually condemns this noxious practice for it leads the colonists to assume they had lived there all along, and can sleep with a clear conscience as they can ignore the… Read more »

Kim you can say what you like, it doesn’t really bother me that you don’t ‘buy’ what I say. It’s a comment site, and I’m not here to persuade you, I’m here to express what I feel to be the case after 25 years living in Welsh-speaking Wales. I’ve learned Welsh, as has my wife, to the best of my ability, and I can tell you (whether you believe me or not is irrelevant) that we’re in the minority by, as I said, a ratio of a dozen to one. I’m not sure how that makes me racist. I’ve encountered… Read more »

Not a retraction but a clarfication. Reading your last sentence I agree with that… It’s what I’ve called in previous posts the “Establishment” and I’m in no way wilfully blind of them. They’re odious.

There’s a long tradition, certainly in England, or railing against petty bureaucracy and the interference of the state in people’s lives. The Daily Express article is as much anti that as anti Welsh The frequent expression of anti-Welsh language sentiments is the symptom of 3 underlying causes: 1. Wales hasn’t been able to establish a narrative explaining why the Welsh language and culture needs defending and the need for interventions to do so. 2. Conflating Englishness with Britishness 3. A crisis in English national identity. I am a fan of English singer, song writer and political activists Billy Bragg and… Read more »

Speaking from my perspective as a Welshman here in East Wales (i.e. Shropshire) where I proudly live in a house with a Welsh name, this sounds much closer to the mark. If the council here came and tried to tell me what I could and couldn’t name my own house, I’d tell them where to go; a sentiment which I expect would be shared by the readers of most newspapers except possibly the Guardian. That’s not to say that I’m giving the Express any credit for being accurate here: just that I too think they’re being anti-officialdom more than specifically… Read more »

Is this the same DAILY EXPRESS that calls us all windbags ?