At the climax of the national rail strike of 1919, then Prime Minister David Lloyd George emerged from No 10 after negotiations with the union leader Jimmy Thomas.

They said nothing, preparing to make a statement later – but one Welsh speaking journalist called over to David Lloyd George ‘A oes heddwch?’ – ‘Is there peace?’

To which Lloyd George replied: ‘Heddwch!’ and the next morning the Western Mail published the exclusive that the strike was over.

Whether that story is a myth or not, it’s clear that over a hundred years later the Welsh language is still proving useful as a means to get exclusives.

This was demonstrated by Golwg360’s interview with Boris Johnson’s Director of Communications, Guto Harri, who has leapt with one bound into the position of being one of the most influential Welshmen at No 10 since David Lloyd George himself.

The closest we usually get to knowing what the Director of Communications thinks is when they are quoted from the WhatsApp Westminster lobby group chat as ‘a source close to the Prime Minister’, so Guto Harri’s openness was refreshing, if surprising.

And his appointment is very interesting as he has not kept his opinion of Boris Johnson to himself over the past few years, and it’s clear that it differs from his new boss on a few key points.

Once again an understanding of the Welsh language comes in quite useful as Guto Harri often tweets in his mother tongue and has presented a Byd yn ei Le on S4C for some years.

Responding in Welsh to a question about why he went to work for Boris Johnson, he noted that he was a “very different politician back in 2008-2012”.

And when interviewing the Prime Minister himself on the programme Y Byd yn ei Le he asked him “what happened to the popular, ‘one nation’ liberal conservative I worked for at City Hall”.

There are some obvious clashes between Guto Harri’s own politics and the ‘muscular unionism’ espoused so far by Downing Street. Guto Harri is very much rooted in the Welsh politics sphere, a pundit on Welsh politics – even a Nation.Cymru contributor – and going so far as to support the devolution of broadcasting in principle.

He’s also very pro-Remain, saying as recently as 2019 that a “second referendum was possible”.

He has also suggested that Boris Johnson may not himself have been entirely committed to delivering Brexit, expecting instead that the campaign would be lost and the idea “crushed under the marrow”. 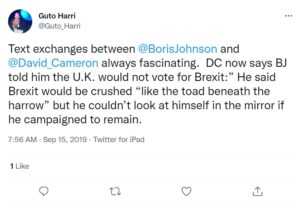 Guto Harri’s political calculation on being asked to work for Boris Johnson may not have extended very far beyond taking a once in a lifetime opportunity to be right at the centre of British power.

But I wonder whether he images that there may actually be an opportunity to change Boris Johnson back from ‘Brexit Boris’ to the liberal politician he admired when he was the Mayor of London in 2012?

The Conservative party are actively looking for an alternative to Boris Johnson and Guto Harri may have gambled that the best man for that job is Boris Johnson himself.

But not Brexit ‘Muscular Unionist’ Boris but the popular ‘one nation’ liberal Conservative he worked for at City Hall a decade ago – the Boris Johnson of the 2012 Olympics opening ceremony.

It’s most likely of course that Guto Harri will never be given the opportunity to find out whether he is right or not. The consensus is still that Boris Johnson is on his way out – perhaps soon, perhaps after the local elections.

‘A oes heddwch?’ Perhaps not for a while yet.

When you take the ancient native tongue into the halls of the enemy, beware the concealed long knives Guto.

Is that the liberal, one-nation conservative Boris who bought a water cannon to use on protestors which could never legally be used? And I guess those viscous quotes about letter boxes etc. were before he became a liberal? I don’t think there is a good version of Boris Johnson but there is a better one than this one (arguably Trump also had a different personality before he got close to power and thought pandering to loony right was the way to go) and that might be the one Harri wants to get back to, but probably won’t be allowed to… Read more »

Did anyone else see his arrival at Downing Street?… Anyone else appointed to a top job turns up with at least a smart new briefcase. He had a Tesco carrier bag!

Depends how long his new life will last!

It is increasingly unlikely that Boris Johnson would have the political space to revert to the “very different politician” he might have been in the past – even is he wanted to. This is because much of the resentment to his premiership comes from the Brexiteer right wing of the party. It is inconceivable that Guto Harri does not realise this; he knows that he will not be trusted by many sections of the party, and he will also realisethat a Director of Communications cannot make miracles in any case. A more plausible explanation for his appointment is that his… Read more »

after the mob on starmer he has non

Don’t be riddiculous, if Johnson ever really was a ‘one-nation-tory’ he sold that birthright for a mess of pottage long ago. He is a privatist, pure and simple.

I see Rees Mogg is in for a quiet time in his new job…… There are no “Brexit opportunities” only damage limitations.

…..Brexit opportunities for his own companies or for the country, I wonder?

Maybe he should be called Brexit Opportunist instead !

I’m finding it difficult to decide which of these two I despise more.

Somebody give Harri a cap to doff.

The “best” replacement for Johnson would be a loud mouthed anti vaxing d******d, of the type once found talking b**ll*cks about herd immunity in the Tory club bar.

The Johnson whose passing Harri laments never existed. Who is he trying to kid?