How does Welsh Labour’s new leader solve their ‘mid-Wales’ problem?

During the Welsh Labour leadership election, all three candidates have emphasised their ability to appeal equally to all parts of Wales.

The question is, to what extent has Labour already achieved this and where should the new leader concentrate his efforts?

Labour is the dominant party in Wales by some distance. They have 28 seats in the Senedd which is two more than the next three largest parties combined.

At Westminster, they managed to win 28 out of 40 Welsh seats at the last election and in local government they currently have 374 councillors, which is considerably more than Plaid (184), The Conservatives (168) or the Liberal Democrats (52).

However, this apparent strength hides some quite remarkable regional differences. The Labour party currently has hardly any council representation in Mid Wales at all. The map below shows the location of all Labour councillors in Wales

Yes, there are fewer people in mid-Wales and therefore fewer wards. Nevertheless, the lack of Labour representation there is striking.

Although Labour do have councillors in Pembrokeshire, Carmarthenshire and Powys they are all located very much to the south of those Counties.

Meanwhile, in the north, nearly all Labour councillors represent areas along the coast or around Wrexham.

In fact, according to google maps, if Frank Hemmings (Chirk) wanted to drive to visit his nearest Labour councillor to the south it would take 2h 7min for him to reach David Meredith in Brecon (public transport would take considerably longer…).

Mid and rural Wales is a desert for Labour, and once a party loses its representatives in an area it is very hard for them to maintain their political relevance.

As well as the geographic areas of weakness it is also possible to identify some of the characteristics of wards where parties are strong and where they struggle.

Below is a plot of Median House prices in a ward (September 2016 to September 2017) against the percentage of Welsh speakers (2011 census). 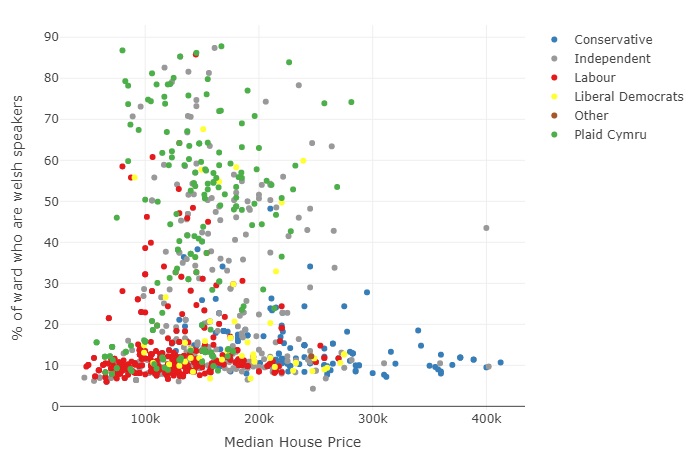 Click on the picture for an interactive version. If you double-click on a party in the legend it will remove all other parties and if you hover over a councillor you should see their ward and name.

Not many people will be surprised to see that Conservatives tend to represent wards with expensive houses, but it is noteworthy that there are only six Labour councillors representing wards where over 50% of the population speak Welsh.

Whilst Plaid Cymru are predictably strong in wards where the number of Welsh speakers are high, the Liberal Democrats have the same number of councillors as Labour and there are many independents in these areas as well.

At Westminster elections Labour has done well in Welsh-speaking areas. The party held Ynys Môn and came whithin a whisker of winning Arfon in 2017.

Even in mid-Wales the Labour Ceredigion vote doubled in the 2017 elections and it’s important to remember that Labour does have a history in the region.

They held the Westminster seats of Brecon and Radnorshire (until 1979), Ceredigion (until 1974) and Meirioneth (until 1974).

Turning to the Assembly, it is very difficult for Labour to think about ever winning an outright majority in the unless they can find a way to pick up more votes in both more rural and Welsh-speaking areas.

What can the few Labour councillors, like Sion Jones (Bethel) and Dot Jones (Llannon), in Welsh speaking wards teach their party about appealing in these areas?

This kind of analysis can also benefit other parties. Looking at the map of all councillors and more plots of characteristics (available at www.dwdldata.wales ) it becomes quickly apparent that there are very few Plaid councillors in areas of low Welsh identification (2011 census).

What can councillors like Mark Strong (Aberystwyth North), Catrin Wager and Mair Rowlands (both in Menai Bangor) teach Plaid about appealing to non-Welsh identifying voters?

As for the Conservatives, it’s clear that they struggle in less affluent, and more Welsh identifying areas, so how did Tony Thomas and Brian Jones succeed in Rhyl?

In 2019 the new Labour leader, and their new Plaid and Tory counterparts, will be assessing their party’s political positioning in the hope of identifying strategies which will lead to success in 2021.

There are key questions about whether they try and expand their party’s coalition of voters or whether to defend the positions they already hold.

Looking to the local government level can provide essential insights, as well as a reality check as to their popularity with key demographics.

Meanwhile, taking advice from candidates these statistics show have won against the tide would be a good source of useful insights.