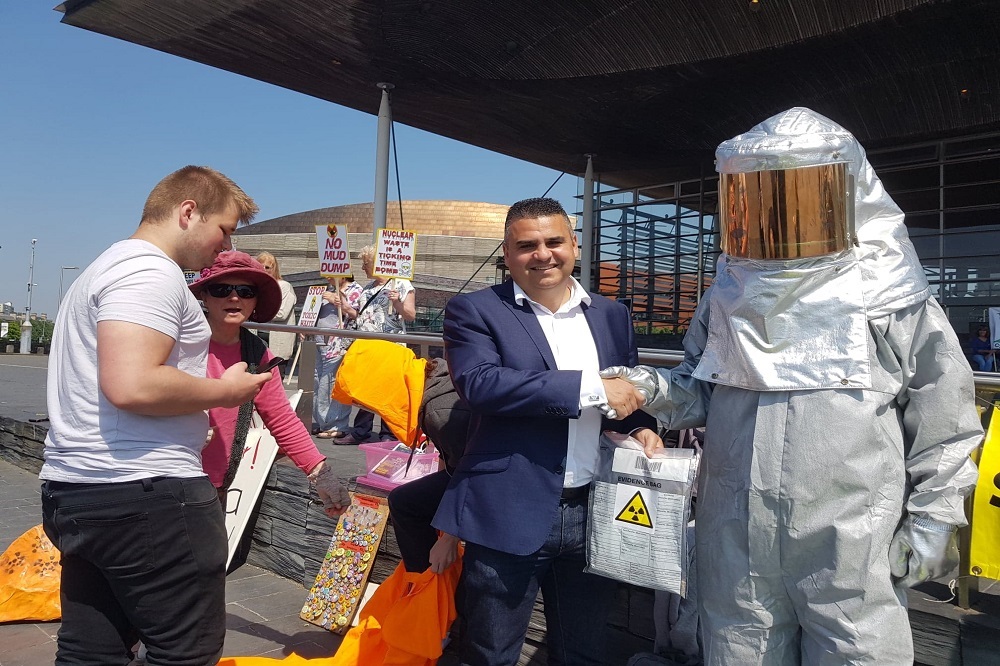 I can still scarcely believe that the Welsh Government is welcoming Hinkley Point’s nuclear mud being dumped 1.5 miles off the coast of our Welsh capital. This scandalous debacle should be a game changer in Welsh politics. I really regret the muted opposition from political party leaders and also the Welsh media. Nothing demonstrates more clearly that we have a government in Cardiff Bay acting contrary to our national interest. Indeed, the so-called Labour government is acting in the interests of a UK Conservative government’s energy policy, rather than in the interests of our nation.

By the time you read this, 200,000 people will have seen my social media video on the dumping. How could this not be a massive priority for Plaid’s leader over the past 12 months?  I am even more disappointed with Leanne Wood’s latest intervention on social media, accusing me of mansplaining after I asked an EDF employee about detecting plutonium in the mud. To compound matters, Leanne then referred to fake news. This is the line Simon Thomas came out with when accusing campaigners of being conspiracy theorists whilst he was Plaid’s environment spokesperson.

For the clarity of all concerned, all I have done is ask questions and ask for the mud to be tested independently, with public scrutiny. The testing is of minuscule cost when compared to the £40 billion Hinckley project. When I asked initially in good faith, back in December 2017, there was plenty of time to do the testing. EDF, the French energy company behind the construction of the two new nuclear reactors at Hinkley Point C, refused to test more thoroughly.  I feel that was unreasonable and grounds alone not to issue the full dumping licence.

When I first opened the email from campaigners in September 2017, I could scarcely believe my eyes. I have a duty to undertake due diligence on matters, so I met with campaigners. I was hugely concerned after meeting Swansea-based marine pollution consultant Tim Deere-Jones and so contacted Natural Resources Wales (NRW). I met with the top officials from NRW and expected to have all my concerns dealt with. I will be as polite as possible in saying that the NRW officials knew nothing about the dumping of the mud, other than that it would happen and they had been assured it was safe.

I put question after question to officials in the meeting, but they knew no details and later confessed that NRW has no in-house expertise on nuclear energy. As most people will know, I started raising the issue in public and I then met with EDF. Those representing the developer were professional and slick. They assuaged most concerns, but I still wanted to check details with campaigners.

On matters like this, the devil is very much in the detail.

The campaigners were successful in rebutting EDF’s assurances and I then had further questions and concerns. Tim Deere-Jones started his petition for NRW to suspend the licence for dumping the mud and the Petitions Committee looked at the matter. It would be true to say that questions I have asked about the safety of the mud remain unanswered.

The fact is that only five samples of mud were taken from below 5cm back in 2009. The raw data from the testing was also destroyed: why was that? I note also that only one kind of testing was done, whereas officials of the UN environment programme investigating potentially radioactive mud in Kosovo tested samples three ways, using beta spectrometry, alpha spectrometry and plasma mass spectrometry. If it is good enough for Kosovo why is it not good enough for Wales? Five samples, with little detail about these samples, does not seem to be an adequate amount of testing to me, especially when the results are disputed. We are talking about the health of an entire nation here: the mud particles will migrate ten miles in from the Welsh coast that they will be washed all around. If I were a decision maker, I would ensure that as much testing as possible was carried out. This is only reasonable.

It is noticeable that most opposition to the video has come from outside of Wales. Barely anybody in Wales opposes the call for more testing; less than 1 per cent of respondents. The public deserves answers; we all do.

Every Labour AM has ducked this issue. Natural Resources Wales has let us all down and I am questioning the point of the Well Being of Future Generations Commissioner existing because she has done nothing on this matter. Most Cardiff Councillors need to hang their heads in shame also. In January 2018, I moved a motion to Cardiff Council along with Councillor Keith Parry so that the Council would ensure that thorough testing was done. Only Plaid Cymru and Heath Independent Councillor Fenella Bowden supported this: the Lib Dems all abstained, whilst the Red and Blue Tories voted against testing. WalesOnline did not report on this matter.

We are at five minutes to midnight on this matter and I desperately hope that the licence can be suspended, pending investigations of the mud.

We may or may not be successful at this late hour. I cannot make a pledge either way on this. What I will pledge however is that that the decision makers will be held accountable. If the mud is dumped, this matter will run for decades and I will ensure that those faceless people occupying comfortable sinecures in the public sector will be challenged publically for their dreadful lack of action on this most important matter. I’ll make a start now: you will find the Board members of Natural Resources Wales here; https://naturalresources.wales/about-us/our-chair-board-and-management-team/how-we-are-managed/?lang=en Over to them.

Finally, come and join our protest Monday 27th August at midday outside the Senedd.