No, Wales doesn’t have to support England – and here’s why

Is football going ‘home’? Who knows!

Do the people of Wales want it to go ‘home’? Well some do, some don’t, and many don’t care.

But what seems clear is that, win or lose, England is particularly keen that the rest of the UK get behind them.

I’ve had many English ask me why so many Welsh people won’t support England.

They berate the “pettiness” of the “support whoever’s playing England” mantra, and insist that as part of the United Kingdom we should support each other in our sporting endeavours.

“We’d support Wales, so why don’t they support us?” cried one disgruntled England fan.

The British media have been asking the same question. BBC Wales have hosted a phone in on the subject. And articles have been written insisting that we show our support.

Stephen Daisley in the Spectator imagines what would happen if one of the other nations of the British Isles, Scotland, reached a semi-final:

“England fans would throw their support behind the plucky 11 and battalions of BBC cameras would be dispatched to interview players’ families, friends and old PE teachers.

“Theresa May and Jeremy Corbyn would discover long-lost great grannies who once had a fish supper in Portobello.

“The Sun would give away novelty kits bearing the legend ‘It’s coming hame’; the Mirror would reprint the lyrics to Flower of Scotland for its readers to sing along.

“England, in short, would be a mate about it.”

Unfortunately, we know this is nonsense because Wales did get to a semi-final two years ago and the reaction of the British press was largely to ignore the whole thing.

The Sun’s reaction was to suggest that Wales’ players were really English.

Compare the front page of the Sun when Wales played Portugal in the semi-final, with their front page for England’s quarterfinal: 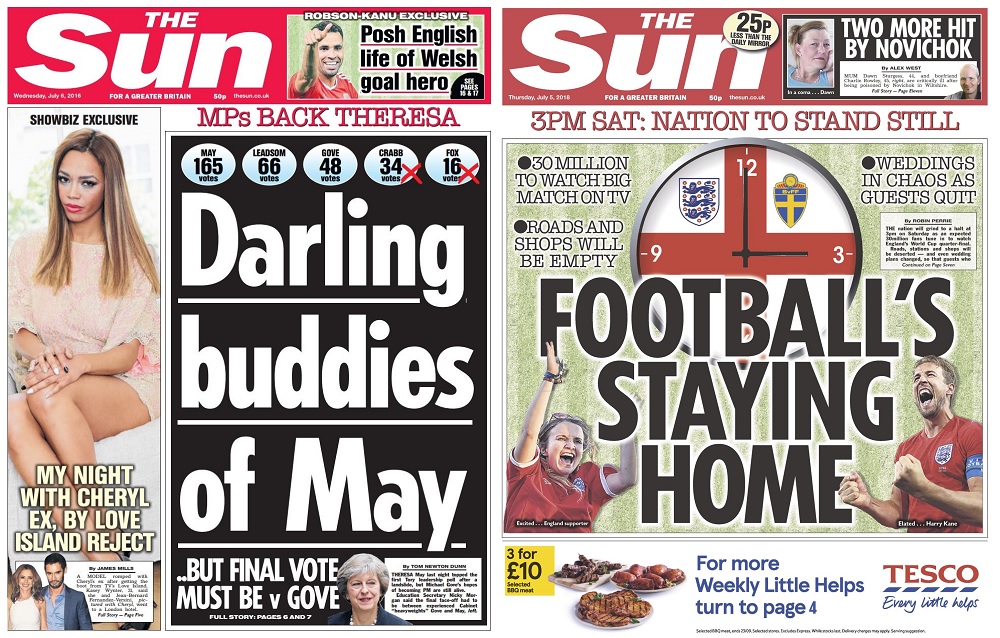 So we know that England’s support for Wales was at best lukewarm, but why are so few people in Wales ready to support England?

The short answer is that English identity is often synonymous with British identity, and when we Welsh are asked to embrace Britishness what we are actually being asked to do is to embrace Englishness at the expense of Welshness.

Demanding that Wales, Scotland and Northern Ireland support England is a classic example of this dynamic in action.

England and Britain are considered interchangeable, and therefore England are presented as the de facto Team GB at the World Cup.

Therefore it is considered only natural, in the eyes of many, that we in Wales, as British people, support England, and we are considered petty if we don’t do so.

This also explains why there was no such pressure put on England, Scotland or Northern Ireland to support Wales when we reached the semi-final.

There was no such feeling that Welshness could represent all the people of the UK in the same way as Englishness.

Many in Wales resent such an imposition of Englishness under the cloak of Britishness because it undermines what is an already fragile Welsh national identity.

Despite its cultural richness, Welsh culture is being slowly eroded by the soft power of its much larger neighbour.

Wales is geographically and demographically smaller than England. It is not an independent nation state and has little recognition on a world scale.

Unsurprisingly, smaller countries across the world often define their national identity against an “antagonistic other” which is often a large neighbouring country which has historically played the role of coloniser or oppressor to the smaller nation.

Thus the smaller nation’s national identity is often defined in terms of being different from the “antagonistic other”.

For example, Basque and Catalan identities define themselves against the dominant Spanish culture, and countries of the former USSR foster a national identity that is as un-Russian as possible.

The need to define Welsh national identity against an “antagonistic other” is unsurprisingly more pressing still because we also belong to a United Kingdom where British identity is considered synonymous with English identity.

In a world where English national identity enjoys constant validation by virtue of being equivalent to the national identity of a historically significant and influential world power, it is unsurprising that many feel the need to bolster a distinct Welsh identity by highlighting the differences rather than similarities from its “antagonistic other”.

This mitigates against the risk of fading into obscurity under the shadow of a British/English national identity.

The national football team is intrinsically linked to national identity. To support your national team is to show the world that you are proud of your country.

Therefore, if you identify with a national identity which defines itself against an “antagonistic other”, to support the latter’s football team is tantamount to the betrayal of the former.

England, however, has not in recent history been colonised or oppressed by a larger power and therefore does not define its national identity against an “antagonistic other”.

Therefore, while largely ignoring it, it can be much more relaxed about Wales’ sporting success because it does not consider their national identity to be a threat to their own.

“But England is no longer antagonistic to Wales, we are all part of the same country, we should be supportive neighbours to each other” exclaims the England supporter.

But while the “Welsh-not” is no longer hung around the necks of our school children who were beaten for speaking their mother tongue in the classroom, the relationship between the countries remains unequal.

Political, economic and cultural power still rests in English hands, and not a day goes by when Wales isn’t reminded of this.

England still enjoys greater economic and infrastructural privilege than Wales, one need only to compare rail transport in both countries to be convinced of this.

If every Welsh person got a pound every time they were the subject to a sheep shagger joke, or told the Welsh language is gibberish, we’d have enough money to electrify the Newport to Swansea line!

So when Welsh people refuse to support England in the World Cup, it’s nothing personal or ‘petty’ – we are simply defining ourselves as Welsh in the face of an identity that would seek to undermine our Welshness.

And the call to arms for Wales to embrace its Britishness/Englishness in the wake of England’s sporting success at this World Cup suggests that we are correct to think so.

I actually think, and hope, that England’s success in the World Cup could be indirectly beneficial to Welsh national identity in the long run.

It may remind the world – and England themselves – that Englishness, Welshness, Scottishness and Irishness are not the same.

If England embraces its own identity as being fundamentally Englishness, and not something that needs to be pressed on others, we can all benefit.

So, all I ask here is that England’s supporters don’t take our lack of support personally.

Let us grumble if England win and enjoy our nationalistic schadenfreude if they lose!