Red Wall or red mist? Why Labour’s election results in Wales don’t tell the story you think they did

Election night in Wales was dominated by one main story, the collapse of Labour’s north-east ‘Red Wall’.

ITV and the BBC both gave considerable coverage to the end of the wall, and even the Guardian decided that Wrexham was worthy of a post-election visit to investigate the ‘western’ edge of the Labour collapse.

A look at the election map explains why this narrative became so important. Of the six constituencies that the Conservative won from Labour, four were in the former County of Clwyd. 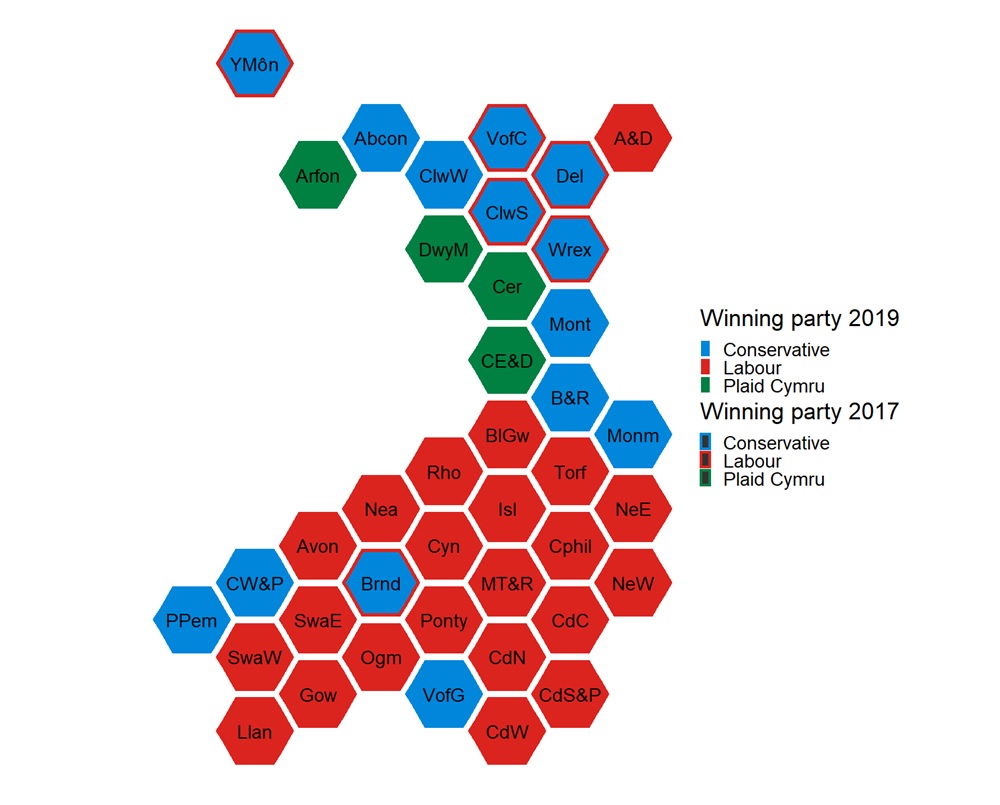 It was clear that something awful had happened to Labour in the north-east. Several different explanations were put forward for the regional disaster/triumph. Some commentators suggested that perhaps it was the unpopularity of Betsi Cadwaladr, the health board for the north of Wales, that had done for Labour MPs. Others suggested that it might have been down to local development plans and inward migration.

But when you look more closely at the swing observed across Wales you find that Labour’s performance in the north-east was in fact no worse than in the rest of the country. 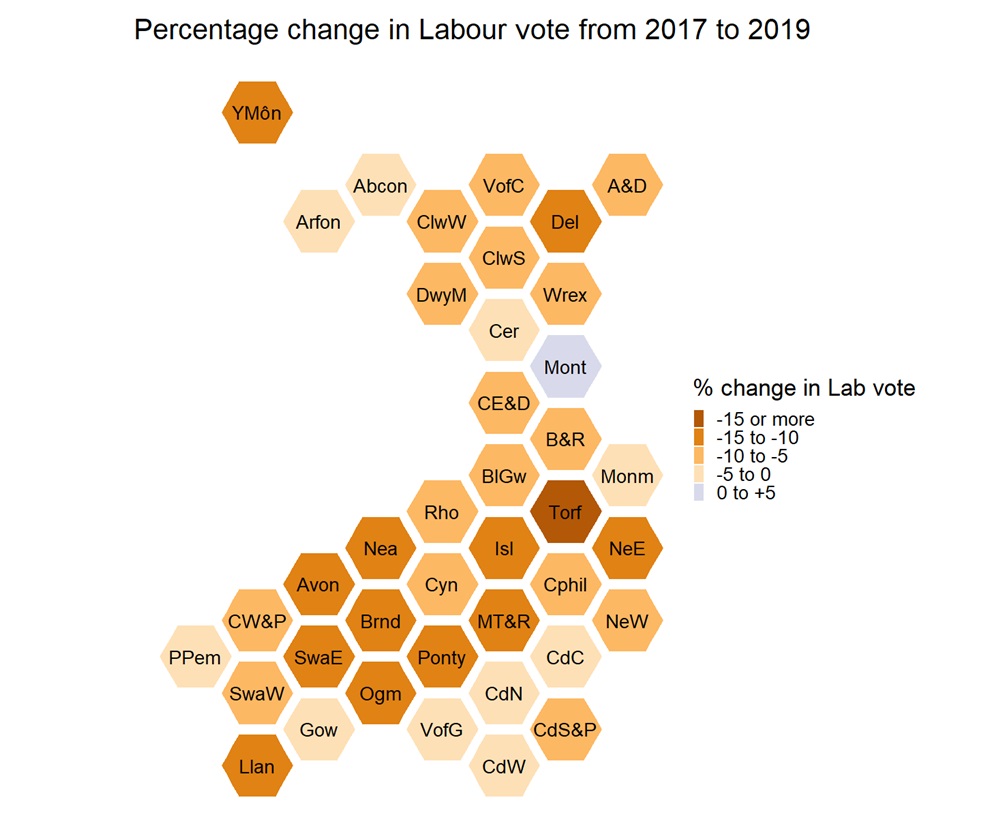 In fact, of the 10 worst Labour swings from 2017 none were in the north-east, and only Ynys Môn is in the north. (Hat tip to Jac Larner who spotted this on election night).

It seems clear from this analysis therefore that the narrative of Labour performing particularly poorly in the north-east on 12 December doesn’t really stack up.

But what about in the longer term? Has the Labour party seen a long-term decline in the north-east which has slowly undermined its ‘Red Wall’?

To investigate this, we can have a look at how Labour performance has changed since the new boundaries were established in 2010. 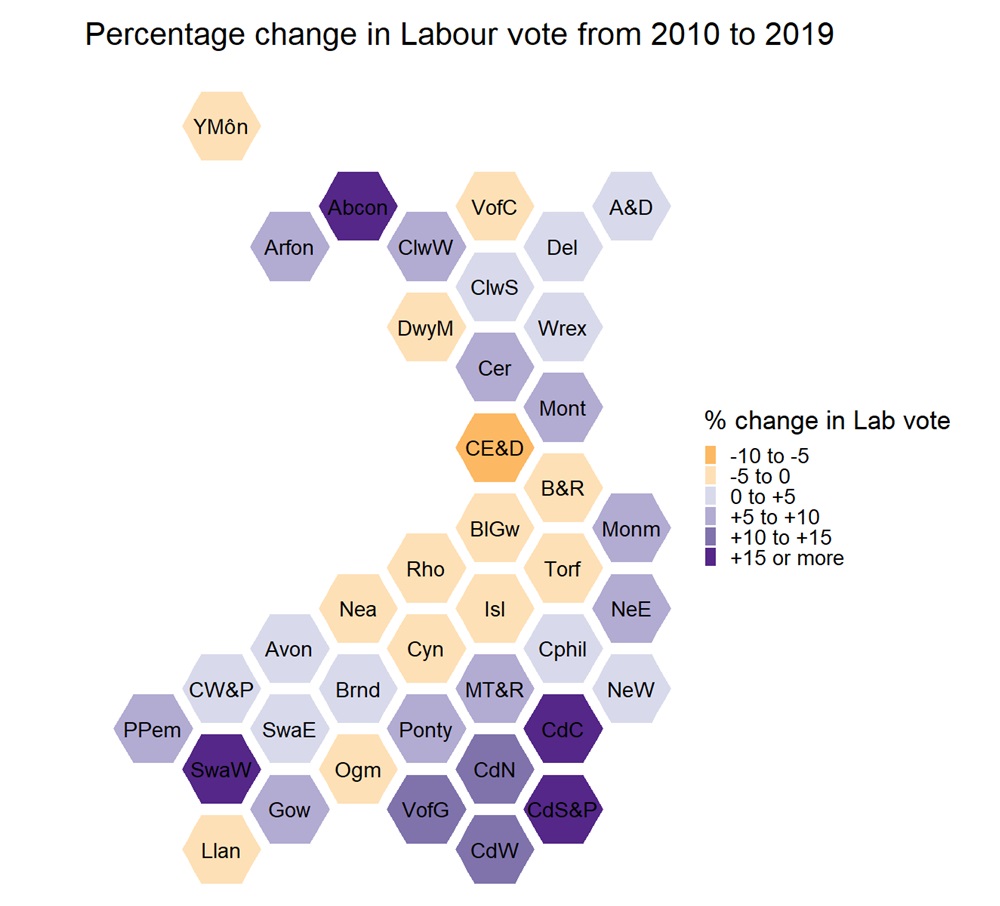 Contrary to received wisdom, what this shows is that over the last 10 it is in seats in the heads of the valleys and west Wales where Labour have lost the most support.

But Labour has also done reasonably well in both the seats closer to the M4 corridor and in north Wales whilst the party has seen significant improvements in Cardiff and Swansea.

If the Labour party hasn’t seen a massive decrease in its electoral performance in the north-east, what accounts for the collapse of the ‘Red Wall’? It must be that the Conservatives have dramatically increased their vote share? But once again, the evidence is mixed. 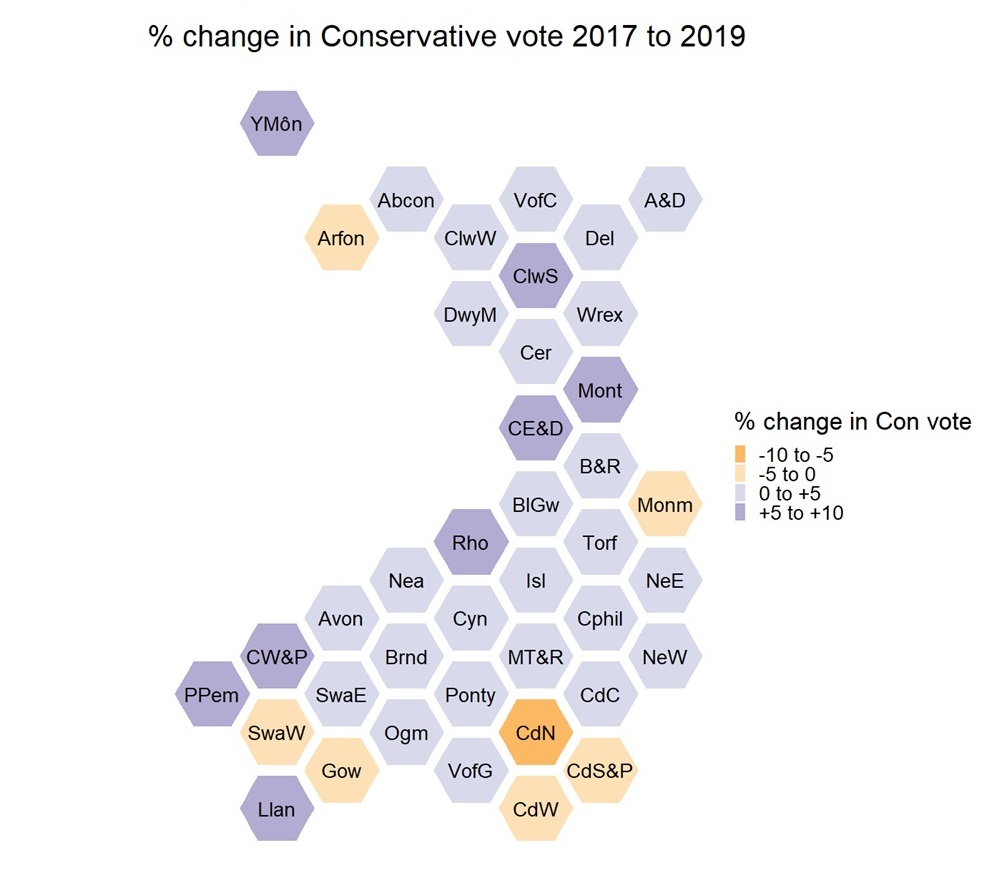 In the north-east, only Clwyd South made the top 10 improvements from 2017. 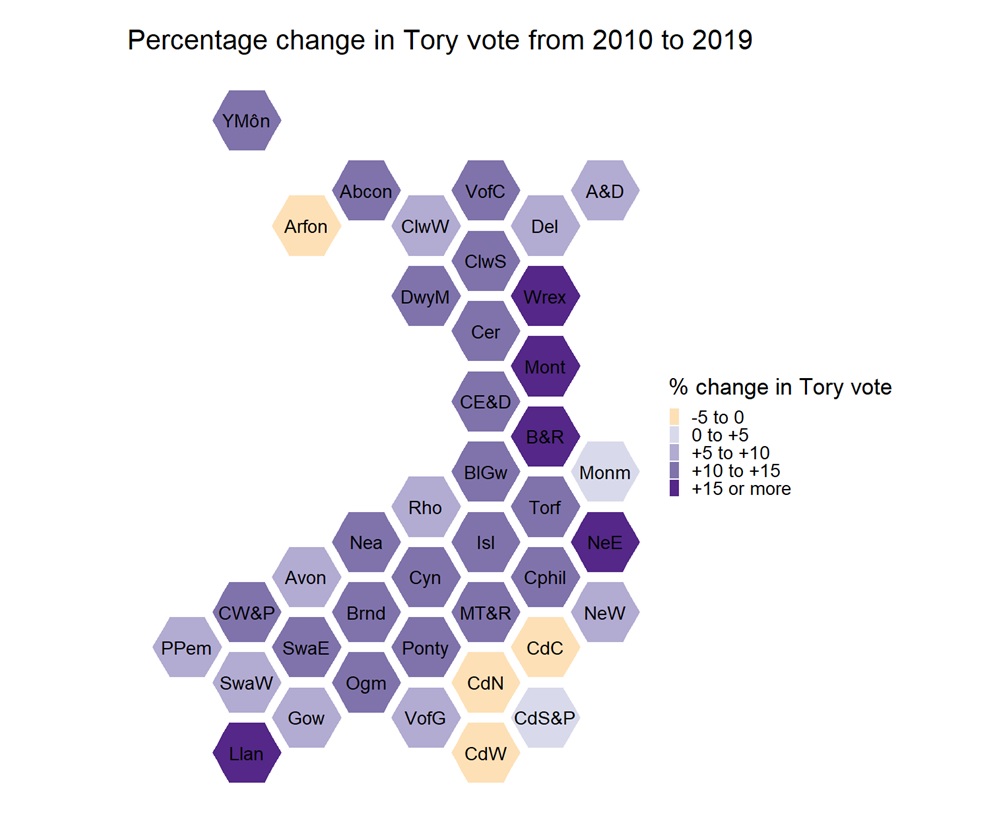 But they are the only two north-east seats in the top 10 of Conservative improvements.

In Wales it doesn’t seem that the Labour party has fared any worse, in terms of vote share, along the A55 than it has along the M4.

The Conservatives have done well in Wrexham, but elsewhere in the region their improvement is not far from the 10.0% national increase achieved by the party in Wales in the last 10 years.

So why did the ‘Red Wall’ fall? Perhaps because it wasn’t much of a ‘Red Wall’ to begin with.

The metaphor of a ‘Red Wall’ from north-east Wales to Humberside has been questioned elsewhere. What has been forgotten is that the north-east only rarely elects Labour majority councils, and Labour seldom has massive majorities at Westminster or the Assembly.

The north-east of Wales was never a stronghold for Labour. Many of these seats are traditionally marginal, have gone blue in the past and, in a very good election for the Conservatives, they went blue again.

Towards a two-party contest?

It’s not easy to finely compare constituency results, but it gives a good flavour of how the electoral landscape looks in Wales. There are a lot more votes cast in the Vale of Glamorgan and Cardiff North than in Arfon and Cynon and the party balance changed somewhat between 2010 and 2019. 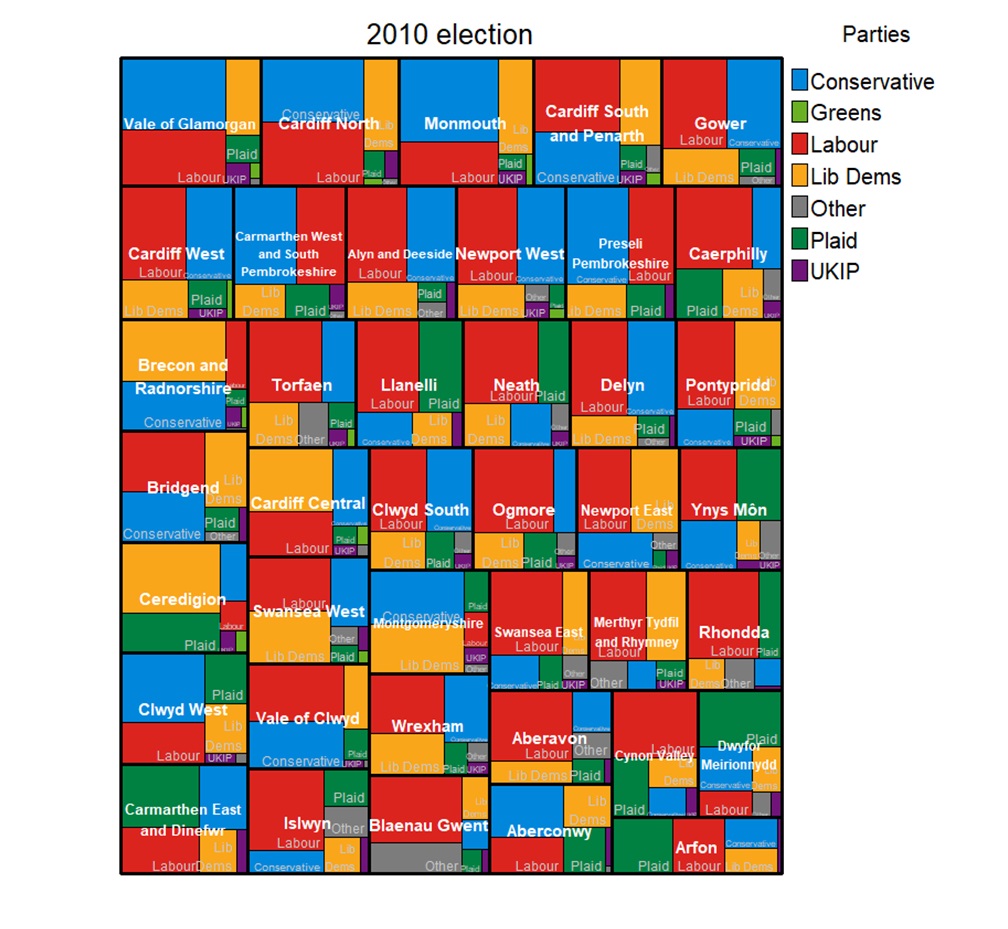 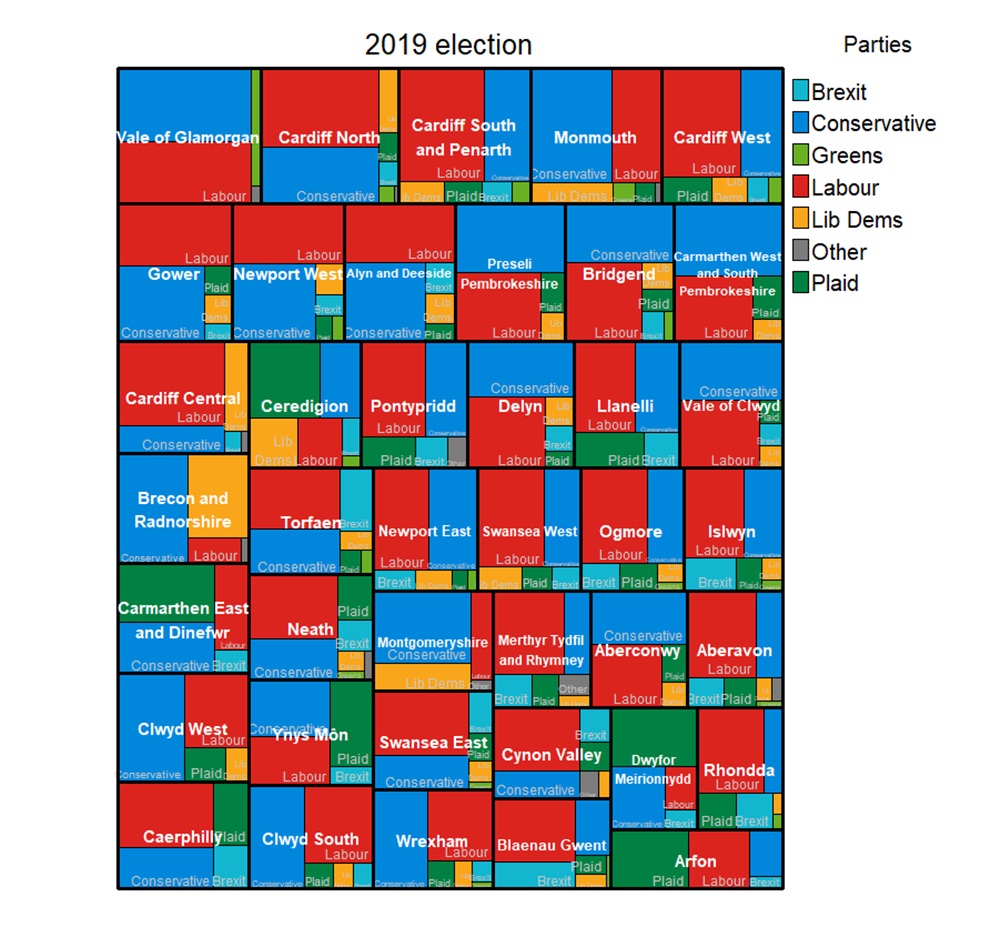 The second surprise is how many seats were dominated by Labour and or the Conservatives in 2019. Most of Wales is, like England, a battle between red and blue. With Plaid occasionally competitive.

Another way to examine the state of the parties is to categorise each seat and then to compare the classifications in 2010 and 2019. To do this each seat has been treated as being actively competed by the winning party and every other party within 10% of winning (and is classified as safe if no other party is within 10%). This produces the following classifications of constituencies.

The key changes are:

The next big change in the Welsh Westminster battle is likely to be around boundary changes. This may have big repercussions on Wales’ representation in Westminster. The original proposal saw Wales drop to 29 seats whilst in a rebalanced 650 seat parliament Wales probably have about 32 seats (compared to the current 40).

But whether legislation drops the number of constituencies to 600 or 650 as is currently rumoured will likely make little difference to the political make-up of Wales’ constituencies.

There are only five constituencies in Wales where anyone other than Labour and the Conservatives are within 10% of winning (the seats Plaid hold and Ynys Môn). Most of the drop will therefore be felt by Conservative and Labour MPs, the extent to which the parties can manage their selection battles is going to be one of the main drivers of politics in Wales in the next four years.

Who knows, maybe there will be a sudden increase in support for increasing the number of Assembly seats – particularly from MPs who are on the receiving end of the boundary changes?

Little point in Labour trying to take some comfort in the 2019 General Election result because it was in effect a second referendum on Brexit which the Conservatives were bound to win. It was a one-off. The real test of Welsh political opinion will come in the 2021 Senedd election when new issues will be thrown up post-Brexit and Wales will have some serious decisions to make about its own future. There’ll be no repeat of 2019.

The elephant in the room for what the future political make-up of Wales will look like is Brexit. Or specifically the affects of Brexit on Wales. If Brexit affects Wales badly – as widely predicted – the Tories will be crushed here, Labour could well take a big hit too for aiding and abetting Brexit through their ambiguity. That may well be the only good thing to arise from Brexit – a political change in Wales is long overdue.

We have got to defend the interests of Wales and we in Plaid Cymru have got to be seen to do it.