Taika Waititi is renowned for humour and heart. What We Do In The Shadows is a bloody blast of benevolent and irreverent laughs delivered by four vampires house sharing in New Zealand.

Hunt For The Wildepeople is a tale of one young misfit, one old misfit and the bond they develop in finding relatability in all their differences. Both films are low budget independent pieces.

With Waititi being brought on board for Ragnarok, I smiled at the thought of the Mighty Thor being directed by such a comedic talent.

For the most part, Ragnarok doesn’t disappoint. Laughs come quicker and bigger than any other Marvel Studios film.

I do think that Watiti has more successfully walked the tightrope between heart and humour in the past.

But I’m fine with the trade-off as this is a high-concept comedy amidst the legacy of a continually expanding universe.

Though seemingly dangerous, the comedic tone is set right off the bat as Thor undercuts Surtur’s evil monologue.

Even when Hela (Cate Blanchett), Goddess of Death (and the colour black) shows up to beat a tentatively reunited Thor and Loki (Tom Hiddleston) across the cosmos, the laughs do not stop.

Chris Hemsworth is having as much fun as the audience. Though he still has the adonis physique and trademark cape, he truly lets his hair down, even after it’s been sheared off.

Hemsworth has always been a perfect fit for Thor but has now managed to step away from the caricature of thick-headed God. Hemsworth proved by his goofy turn in Ghostbusters that he has a bountiful amount of comedic timing and comic bravado but as he is front and centre in Ragnarok, he is the driving force for the wealth of gags.

The chemistry between Ruffalo (the Hulk) and Hemsworth is particularly palpable, their camaraderie-cum-competitiveness developing over the five years since the original Avengers.

Ruffalo is also on incredible form. Headstrong and brash when green, spacey yet scientific when puny.

Hulk is now a little more articulate (albeit with an angry teenager’s authority and eloquence) which adds a lot to the character. 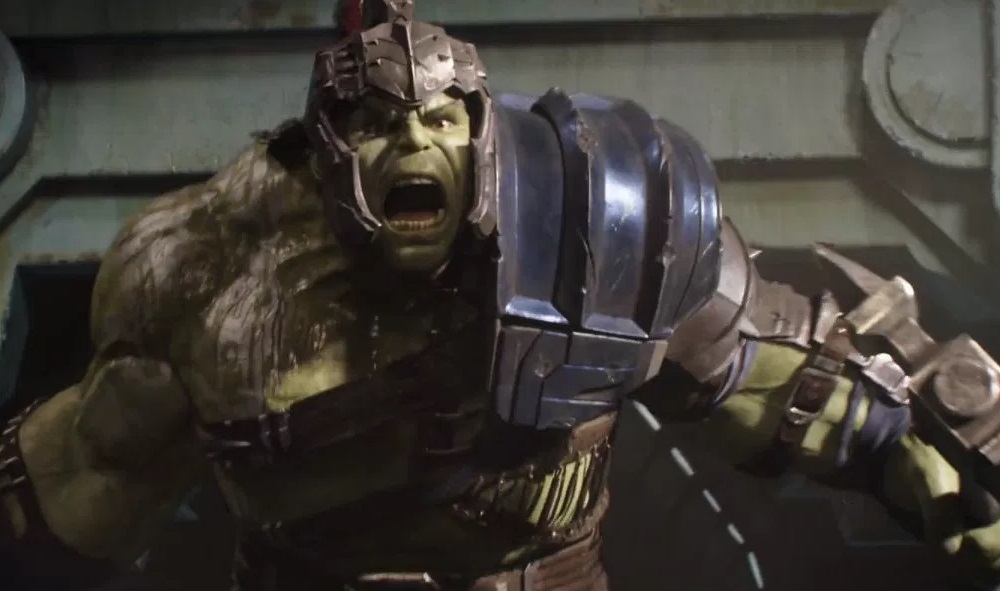 It’s a shame that the other characters don’t quite have the development they deserve. Loki is deliciously devious but very much an aside to the overarching plot.

Though I love what Hiddleston does as the Trickster, I don’t think he would have been missed either.

Tessa Thompson’s Valkyrie doesn’t do enough to leave a lasting impression as she’s basically the archetype of Thor in his first movie.

Hela disappoints too, never really living up to the potential that a doom bringer should have.

Cate Blanchett seems as though she’s having fun hamming it up with Hela’s pithy monologues and stylish action scenes but she is victim to the inherent problem Marvel Studios has had with villains deserving of their heroes.

The marketing campaign for Thor Ragnarok has rested on the pitting of Thor and Hulk against one another, again perhaps because the heroes are simply more interesting than the villains.

The gladiatorial scene featuring armour clad Hulk (paying kudos to the Planet Hulk comic storyline) and a Mjolnir-less Thor is delectable. This scene steals the show.

The fight is reminiscent of the crowd-pleasing Hulk-Buster Iron-Man vs out-of-control Hulk showdown in Ultron but way more bonkers.

From a comedic aspect, there’s nothing Thor Ragnarok won’t attempt. Hitting the marker for the majority of its hoofs at humour, this is a testament to Waititi’s unique and strange sensibilities.

He even lends his soft, Kiwi voice to rock-troll Korg, a caring, sweet-hearted gladiator with a habit of stealing scenes.

The retro 80’s aesthetic is welcome, not only because of the success of Guardians Of The Galaxy but that in many ways, Ragnarok feels like a silly 80’s comedy.

Albeit one with a budget bigger than Hulk’s alluded to penis and a cinematic universe brimming with Easter Eggs and allusions to next year’s mammoth Avengers: Infinity War.

Though, whether through magic or science, Ragnarok is never bogged down by world-building, knowing winks and the grander plot at hand.

Waititi has trimmed the fat from past Thor instalments like the idling relationship with Jane Foster whilst delivering the fun, frenetic and frantic pace expected in each of the Marvel Cinematic Universe movies.

Watching any of the phase one MCU movies in comparison to something as well-designed and dazzlingly in-your-face as Thor: Ragnarok may seem a little tame.

This is a testament then to MCU honcho Kevin Feige who is willing to gamble with independent directors such as Shane Black, James Gunn and now Taika Waititi to deliver unique takes on the tried and tested formula that has shaped what a modern blockbuster should look, sound and feel like. For better or worse.

The soundtrack by Mark Mothersbaugh hits the usual dramatic tones of the MCU back catalogue but also does deliver on the retro vibe with some synthwave tracks that wouldn’t go amiss at a neon-lit rave.

It is in keeping with the tone and works well to heighten action and add a shade of cool to the wackier moments.

Whilst Thor Ragnarok isn’t as emotionally toiling as Civil War or nonchalant cool as Guardians Of The Galaxy, it is about as much fun one can have at a cinema.

Laughter and enjoyment is demanded by Hemsworth, Waititi et al, as they light up the screen in a splurge of toxic colour so sweet you’ll have to brush your teeth afterwards.

Be grateful that we are at a point in modern blockbuster cinema that for every three unknowingly stupid Fast and Furious or Transformers, we get one charming, winking slab of self-aware silly that is purely a good time for the sake of it.

More common, low class, popular culture mush for Welsh people to digest apathy into being, not obedient, but rather difater (as the Welsh word goes) or amalgamated through bland low culture into the Anglo-cultural sphere even further.

Hence my saying, must we use the exhaustable resources of this fine website to promote such low-brow, common muck at the expense of articles relating to Welsh culture and Wales and subjects which could help Welsh people free themselves of such uncultured, Anglo-centric garbage?

Son of Snowdonia
Reply to  Capitalist and Welshnash

First time I have agreed with you, Capitalist. 🙂

However, it is far, far worse than just uncivilised. It is part of the US’ war on the world. EVERYONE on this website should read this document from 1997. It is a genuine document from a senior US military official in which they spell out, in black and white, their plans for the 21st Century:

If we want a truly independent Cymru, how can we counter this culture and thrive economically? This is what we must discuss and plan.

What in all that’s holy has this advert for mass popular culture got to do with matters concerning Welsh nationhood and Welsh culture?