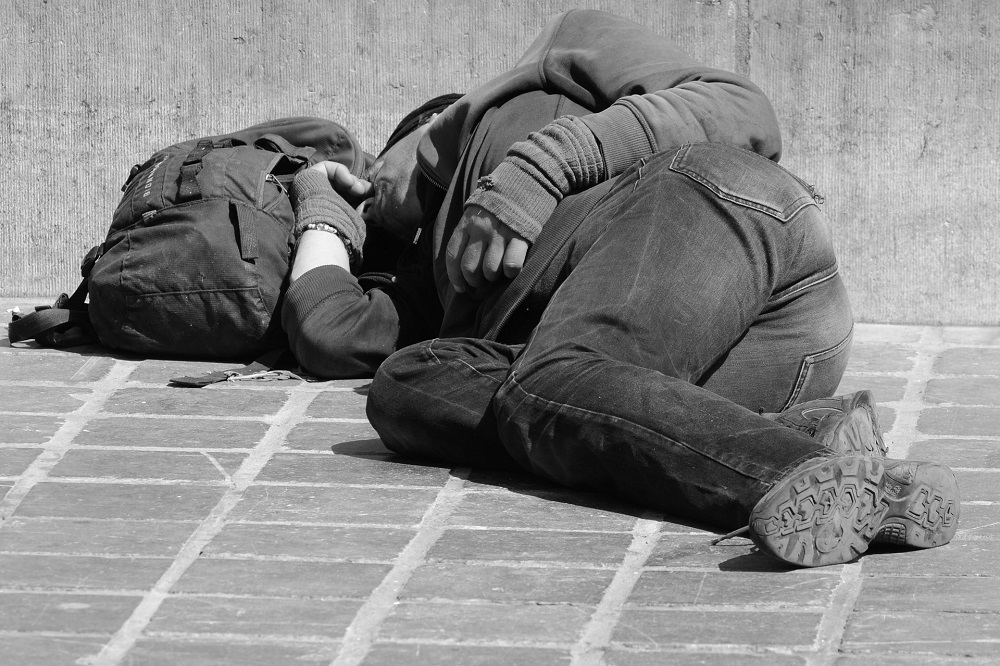 At the back of the church volunteers welcomed a gathering of some 40 homeless people offering them care and a safe place to stay.

A service focused historically on the breaking of bread and the fleeing of an ancient people seeking sanctuary felt more real than usual. It felt deadly real.

Treading carefully in-between the sleeping bags in the sanctuary I noticed that dry taste in the air. It brought back memories of the thousands of refugees I’d seen crossing the border between Greece and Macedonia some two years before at a desperate border point called Eidomeni.

Images came flashing back of vulnerable people seeking safety – especially children. Many had died getting there. Others would suffer abuse at the hands of traffickers. They would vanish or die as they tried to move on.

In such places the air whispers a cold truth that death may not be far away. Today, the homeless die on the streets of our cities – especially when it’s that cold.

A few days earlier on a freezing Saint David’s Day, I’d come across the frozen sign outside Saint John’s: ‘Due to the weather we will open 24 hours until further notice. Come on in and warm up!’

Having been invited I walked in. I wanted to be in Wales that day but as a Welshman and as a Christian, I sensed it had been quite a while since I’d felt that close to the legacy of our patron saint. Do those little things: progressive things.

Stranded in Scotland for several days because of the weather I reflected on my progressive values and politics.

For me, Princes Street will always be a special place. The morning following the 1997 devolution referendum I’d agreed to fly to Edinburgh. As an elated but exhausted Yes for Wales campaigner, I remembered how good it was to walk down Princes Street.

That feeling has never really gone away. Neither have my progressive values articulated during that campaign: a concern for the environment, a commitment to equalities and human rights and a passionate belief in the full dignity of the Welsh nation.

These values now stand fragile but courageous before the bitter bite of Trump populism and the ‘othering’ of the nativism that drives forward a hard Brexit dynamic.

Although stranded in Edinburgh, I was in good spirits. The responses to the traditional Saint David’s Day polling on the constitutional position pleased me. Having a strong legislative National Assembly now reflects the settled will of the Welsh nation.

I’d also enjoyed a good gathering with friends and colleagues from the Scottish churches setting out a vision of how churches should work together in the future.

One priority was how we prepare to serve the poor and to challenge the injustice that now impoverishes so many. We discerned difficult days ahead.

My mind was also focused on a distinct and devolved human rights issue.

On arriving in Edinburgh a few days before I’d taken part in a conference call with colleagues at Displaced People in Action in Cardiff. We marked together the success of the distinctive Welsh Refugee Doctors Scheme which has retrained over a hundred GMC registered medics since 2001.

It’s a world leading scheme that may be worth over £30 million to the NHS. The scheme would not have happened without the dynamics of Welsh devolution and its human rights shaping.

Over the past two decades, Welsh devolution has thrown more than words at human rights imperatives.

The celebrant at the Sunday service in Saint John’s was dealt a tough hand in the choice of Bible readings that morning in Edinburgh.

Instead of nice stories about love, feeding the hungry and welcoming strangers the readings were about sin, adultery, deceit, evil and driving out demons.

He explained how the people of the Bible may have viewed the manifestation of mental illness as being demonic.

For a less-informed ancient age his analysis may well be right. But evil does exist, and it can often be identified in our time in the corporate and political.

Stranded in Edinburgh I’d closely followed events in the USA on MSNBC News: the Mueller investigation garnering guilty pleas for lying from former Trump campaign associates, the murderous lunacy of arming teachers in schools and the possibility of plunging the world into recession by raising tariffs.

After breaking bread, I sat in a pew close to a generous homeless man praying that we and our world would be ‘delivered from evil.’

A new generation of civil-rights leaders are now beginning to emerge in Trump’s America. British and Irish churches and civil-rights groups would do well to watch them at work.

Churches in a changing Wales, visited once again by new levels of poverty, may be called upon not only to provide shelter for the homeless during deadly freezing nights and to support foodbanks during better days but to confront powerful forces with clarity and conviction.

As the Reverend William J Barber II of North Carolina of the Repairers of the Breach movement puts it forcefully, advocating for the poor and oppressed: ‘silence is not an option.’

A new progressive voice is clearly emerging in the tradition of Martin Luther King and progressives are now winning special elections in the unlikeliest of places.

Wales is also stirring. Recently, devolution activists gathered at the Senedd steps to commemorate one of their own, Val Feld.

She was an equality and human rights champion who helped shape the 1997 Yes for Wales campaign.

The evening of her commemoration, the Assembly agreed to further an emergency Continuity Bill to prevent Westminster from grabbing devolved powers.

With a conviction, constitutional competence and determination the ’97 generation could not have imagined twenty years ago, the National Assembly spoke.

Now, in Wales: ‘silence is not an option.’