The secret Welsh history of 2001: A Space Odyssey

On June 16th we shall be bringing 2001: A Space Odyssey to life in Pontio, Bangor, with a series of talks, music, art, including people who worked on the film itself.

We will be celebrating the fiftieth anniversary of Stanley Kubrick’s masterpiece, which reinvented the science fiction genre.

Although Kubrick was not Welsh and, as far as we know, never visited Wales (but maybe he passed through on his way to shoot Barry Lyndon in Ireland), his film has a secret Welsh history.

Kubrick collaborated with science fiction writer Arthur C. Clarke. He was inspired by one of Clarke’s short stories, ‘The Sentinel’, published in 1954, from which he took the idea of an alien civilization burying an object on the moon.

In the story, the narrator refers to ‘the old Welsh air, “David of the White Rock”’. Known in Welsh as Dafydd y Garreg Wen, this traditional folk song was said to have been composed by harpist and composer David Owen (1712–1741) who lived near Porthmadog.

Although the white rock became the black monolith in the movie, the name David remained in the lead astronaut, Dr. David Bowman. And his family name certainly suggests a harpist, or perhaps a Welsh archer at the battle of Agincourt. David is, of course, a popular name in Wales.

In July 1967, one year before the film was released, Kubrick wrote to Clarke. ‘Did you see the fantastic item in TIME’s science section (21 July) about the discovery in a Welsh urinal that throws light on the existence of life on Jupiter?! Can we work that into the script?’

I do not know what was found in a Welsh toilet in 1967 that pointed to extra-terrestrial life in Jupiter but it would certainly be fascinating to know how it influenced the film.

For ‘The Dawn of Man’ sequence, Kubrick had wanted to find a desert landscape but close to home. His assistant, Andrew Birkin, scoured the British Isles for him.

As Michael Benson explains in his book on the making of 2001, Space Odyssey, ‘Eventually he located an abandoned eighteenth-century copper mine in Wales: a spectacularly ravaged golden-orange landscape of serrated buttes and rockfalls called Parys Mountain.

‘He also discovered an equally suitable dunescape, Newborough warren on Anglesey, which, if shot in a southeasterly direction, was crowned spectacularly by distant mountains. The latter in particular was deemed excellent by Kubrick’.

The idea was dropped because Autumn was approaching and the idea of shooting on location in inclement weather appealed to nobody! Ultimately, he shot the scene in Namibia but imagine if those unforgettable sequences had actually been filmed here?

Leonard Rossiter, who played Soviet rocket scientist and astronaut Dr. Andrei Smyslov, was evacuated to Bangor in North Wales during the Second World War and stayed for about 18 months. (In the film, the segment following the one he appears in, takes place 18 months later…)

He meets Dr. Heywood Floyd whose last name, apparently, is an English variant of Lloyd, originating from the Welsh name Llwyd (meaning grey or grey-haired).

Much ink has been spilled on the origins of the name of the supercomputer, HAL. Some say it refers to his programming, a combination of heuristic and algorithm. Others say that it refers to IBM (think about it), something Kubrick strenuously denied. Yet others say it refers to the Hebrew name for God.

But no one has considered a Welsh origin. I found six definitions for hâl in the dictionary: salt, filth, moor, hall, strong and the act of parturition. Certainly, the final two fit the computer who murders all but one of the crew and hence (unwittingly) gives birth to the next stage of human evolution.

One of those murdered by HAL is Dr. Jack Kimball. According to Wikipedia, Kimball is Old Welsh for ‘war chief’ and Old Celtic for ‘leader of men’.

Some of 2001 had leached over from Kubrick’s previous film, Dr. Strangelove or How I Learned to Stop Worrying and Love the Bomb (1964). Kubrick had wanted to make it a full-blown science fiction film. It was to be narrated by an alien culture looking back at a long-destroyed earth.

Of course, he adapted that film from the novel Two Hours to Doom by Welsh writer, Peter George, who was born in 1924 in Treorchy, Rhondda.

One of the key strands of that film was the fear that ‘precious bodily fluids’ were being sapped by fluoridation. In his research, Kubrick noted that the UK Ministry of Health had carried out a Fluoridation study on Anglesey in 1955.

While this account of 2001’s Welsh history is not meant entirely seriously, I hope this article will have piqued your interest and that you will join us on June 16th in Bangor for a celebration of this important film. 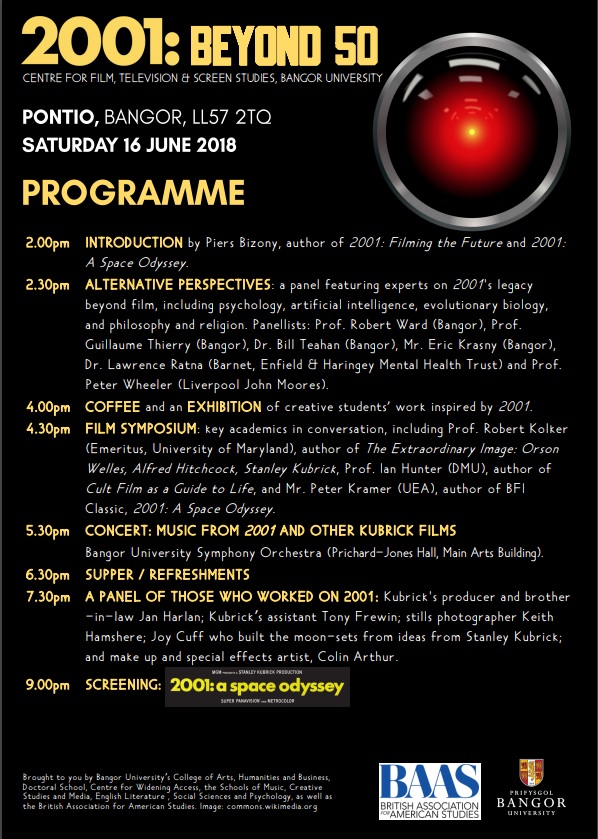