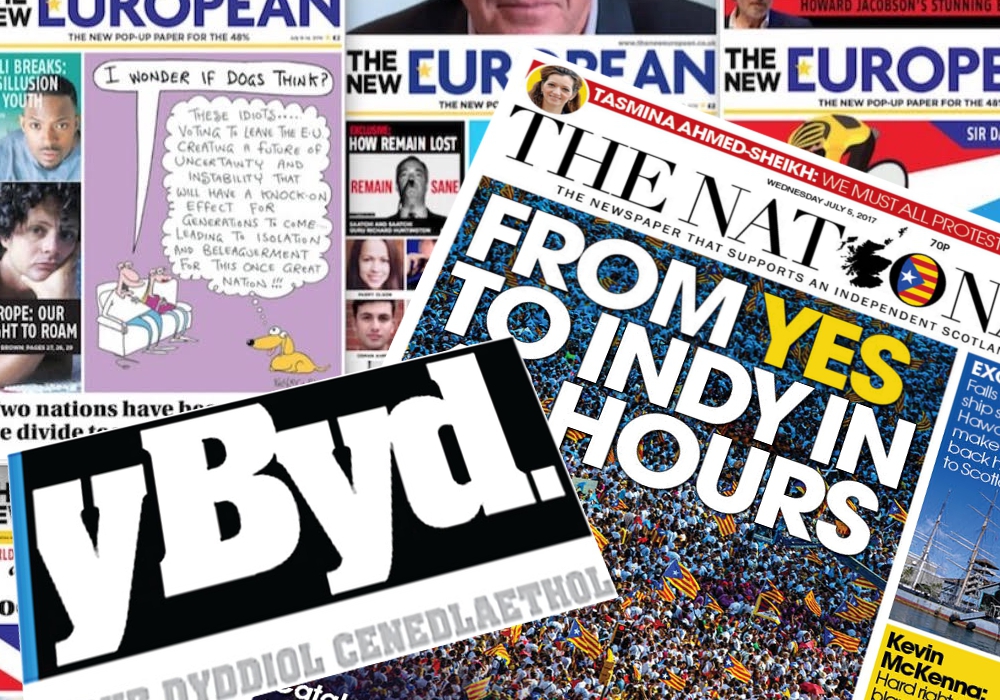 The New European newspaper has just celebrated its first birthday.

It was born from the horror felt by many after the Brexit vote last June; instead of wallowing in self-pity, a small team of people decided to launch a counter-attack with a weekly paper.

They expected it to last a few weeks, months at most, before people’s anger dissipated and made it redundant.  It is still going strong.

It was a similar story in Scotland, after the 2014 referendum, when the profound disappointment of the Yes campaign was channeled into a new independence-supporting daily, The National.

With the rage about the lack of an independent Welsh media – newspapers in particular – becoming louder by the day, it is surely worth thinking about how these successful new ventures have come about, and whether there is a lesson to be learned for us here.

What follows is a section that was cut (for space reasons) from my book The Greasy Poll: Diary of a Controversial Election.

In Scotland, The National newspaper, explicitly supporting independence, makes its debut this morning.

It’s very exciting, not least the idea of launching a newspaper – any newspaper – in the current climate.

Labour bruiser Lord George Foulkes describes it as ‘McPravda’; the party so religiously trumpeted every day by the Mirror and the Daily Record once more demonstrates its wooden lack of irony.

From a Welsh perspective though, it’s hard not to feel raging jealousy.

The swift arrival of The National, riding high on hope and goodwill from far and wide, just throws into painful relief our last attempt at establishing a newspaper in Wales, Y Byd, which finally coughed its last, without ever having gurgled its first, in 2008.

For a sober, painful and revealing comparison of the differing positions of Scotland and Wales, the Tale of Two Newspapers is hard to beat.

Y Byd was yet another Welsh heroic failure.  The nobility of its ambition was statuesque.

Brainchild of the mercurial Ned Thomas, a gorgeous imp of a man and a towering force for good in Wales for over half a century, it was to filter the world through Welsh eyes, daily, and in yr hen iaith only.

Its sense of practicality did not quite match the ambition.

Conceived at just the time it became obvious that print newspapers were on a perilous nosedive, Y Byd was to be published daily Monday to Friday, but not at all on Saturday or Sunday, the only days on which newspaper sales were still half-decent.

From its offices in Machynlleth, a growing team of journalists and ancillary staff produced dummy issues that looked good, great in fact, but somehow never quite real.

Launch dates were set, and then set back, as the huge fundraising and subscription effort needed was taking longer than expected.  All of the usual suspects dipped into their savings accounts, though it must have been with a slightly heavy heart and a suspicion deep down that they were throwing it away.

Farmers, solicitors, teachers and cyfryngi came up with £300,000, but it never really felt like the miners or quarrymen of yore chipping in their pennies for a library or stiwt.  It felt like a disaster waiting to happen.

The project was reliant, with grim inevitability, on public money; by the reckoning of Y Byd, they needed £600,000 per annum.

The usual arguments erupted, and all along wearily familiar lines: on the pro side, that it was nothing less than an essential badge of nationhood and to question it was tantamount to treason; on the anti, that it was a vanity project for the crachach that would consume way more than its fair share of finite resources.

Y Byd provided Plaid Cymru with its first serious test in government, one that many party diehards believe they failed with flying colours.

The One Wales agreement, the Labour-Plaid coalition document hammered out the previous year, had been unequivocal:  “We will expand the funding and support for Welsh-medium magazines and newspapers, including the establishment of a Welsh-language daily newspaper.”

Delivery of this commitment fell to Rhodri Glyn Thomas, one of the three Plaid ministers in the new Welsh cabinet.  Giving Plaid the culture and Cymraeg portfolio was a smart move by Labour, for it played to the party’s obvious interests, whilst also being the very hottest of political potatoes, especially when the funds are not there to match the aspirations.

When Thomas announced that his total budget for supporting Welsh language newspapers and magazines was a paltry £200,000, it became clear that political will had drained away from Y Byd.

It committed ritual hari-kiri shortly afterwards, leaving an empty office suite, dozens of disgruntled subscribers and a stink that still lingers years later.  Yet it never produced so much as one daily edition of the bloody newspaper.

In Wales, we had managed to turn something positive and hopeful into a dead end, sectarian mess.

In Scotland, almost the precise opposite has happened.  Independence campaigners’ profound disappointment after the referendum result has been turned outwards, and channelled into getting a pro-indy paper off the ground.

It has happened with remarkable speed, and a great deal of winging it.  The focus was always on getting out a newspaper, and this they have now done.

It will be its own promotional material; the signs look good for its natural growth.  Top down, versus bottom up.

No contest, but what a contrast.

It’s worse than just “no new newspaper” – We seem to have rather the opposite problem with Y Cymro appearing to be about to go under!

Firstly, this is the weakest thing I’ve seen on Nation.cymru so far and seems to mainly exist as an advert for Mike Parker’s book. Why isn’t there any context on how the situation has changed since Parker wrote this in 2014? If the book’s editor had any sense then the reason it wasn’t included in the book is probably in case the newspaper had disappeared within a year of the book being published. While The National is still going, the number of people buying it has dwindled from 20,000 to below 10,000 and with the SNP’s popularity dwindling in Scotland… Read more »

Hi Alwen. I think you’re being a little unfair on Mike Parker here. The Greasy Poll came out over a year ago so it’s unlikely that he had book marketing in mind, rather a contribution to the ongoing debate on Welsh media. It is, IMO, a very important issue and this is as good a contribution as any to that debate. Mike is one of the best-regarded and perceptive writers in Wales, so I wouldn’t associate his work with low-quality ‘buzzfeed’-like copy at all! 🙂

The National has a print readership of under 9,000 and the The New European’s print readership has at least halved in twelve months. I would hesitate to describe either as ‘a success’ in terms of market penetration when the Daily Record and Daily Mail sell 160,000 and 1.4m respectively. The question of whether there is a market for a Welsh language daily – even an English language national paper – is uncertain. However, the point made about Y Byd is a fair one; as is the one about the practical problems of launching any newspaper in the current market, where… Read more »

These days I’d define “success” for a paper as “capable of continuing to publish without losing money” which presumably they’re both doing?

Sadly the same thing has happened to the wonderful English Language Cambria Magazine. It was a magazine to always look forward to with some excitement, bi monthly at first then less frequently later. There were a mix of articles from Politics through to food and the Arts. Sadly again through lack of funding we have seen its demise. It carried on in an on line format but even that seems to have fizzled out. Actually I lost interest in the on line version as it does not give the same feeling and creating the same interest as holding the actual… Read more »

I can’t honestly say my knowledge of politics has been impacted by the non-existence of Y Byd. The English language is where we are lacking a paper, but then again the ”market” isn’t there so it would have to be some kind of public service.

Around the world, Wales must be just one of many who don’t have a media or a voice, because the home markets are too small to be commercialy viable. Maybe we need an international syndicate or whatever the correct and most appropriate term for a collective approach might be. I often feel that much of our problems in Wales are shared problems with others globally. Our collective size and strength may be susbtantial and we need to find a mechanism to pool resources with others – who have different news interests perhaps, but common problems in getting the news out… Read more »