Thirty years since Section 28, we still have work to do to challenge prejudice in Wales

Thirty years ago to this day, May the 24th 1988, Section 28 was enacted, prohibiting the ‘teaching of the acceptability of homosexuality’ across Britain.

It’s therefore timely to catch up and remember the work done by Stonewall, and the future of Welsh LGBT rights with Andy White, the director of Stonewall Cymru.

Where do the origins of the Stonewall movement come from?

The name Stonewall comes from what many believe to be the birthplace of the LGBT rights movement. Back in New York, 50 years ago next year, the regulars at the Stonewall Inn had enough of police raids and intimidation. One night, they decided to fight back.

Some say the first bricks were thrown by a trans woman of colour, which I think is a really important thing for us, as a community, to remember 50 years down the line – especially with the debates we’re having right now.

What is the history of Stonewall UK? 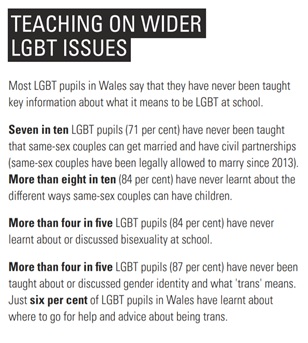 Stonewall is the premier LGBT human-rights charity. We were set up in 1989 in response to a particularly vile piece of legislation brought in by the then Tory government to prohibit the ‘promotion of a homosexual lifestyle’ by local authorities.

This is a piece of legislation that has implications still today in schools across Wales. We see a huge majority of teachers, for instance thinking that they are banned from teaching about anything to do with LGBT issues. Or, being unsure, which which means it still doesn’t happen.

So, this legislation caused such outrage at the end of a decade where gay men, in particular,  had suffered so badly with the advent of AIDS.

A group of activists, men and women, Tory and Labour, got together and decided to form a charity that would in its mission seek to make it impossible for any future government to bring in this kind of legislation.

We were set up with five key goals:

2) The introduction of partnership rights for LGBT people.

All of these are founding goals have now been realised. Yet, 30 years down the line, we are still working hard to achieve change.

What is still to do for gay rights in Wales?

We still face endemic levels of bullying in our schools, bullying and intimidation, hate crimes on our streets. We still have unresolved legal or policy issues. We still face discrimination in terms of the delivery and use of public services.

The big legislative change for us right now, is reform of the Gender Recognition Act, which has become outdated and unfit for purpose. It follows a very medical model which we no longer use in other liberation campaigns. So, there is an awful lot left to do.

What is your position on the gender self-recognition debate?

Who better to identify their gender than the person themselves?

The current model where you have to live in a so-called ‘real-life test’ for two years and then sit in front of a panel of experts, who will then deem whether your gender is actually what you say it is, is really not fit for purpose. It’s an outdated model.

Is there a way of achieving a compromise on the debate over self-identification?

Trans men and women are already using single-sex spaces and services. They have been for many years. The debate around whether a trans woman should be allowed to use a domestic refuge, for example, is essentially a debate as to whether trans women is a woman or not.

If you believe a trans woman is a woman, then you will know that a trans woman will suffer domestic violence in the same way as other women. There is plenty of evidence for that. So, fortunately, here in Wales we have domestic abuse charities who recognise that trans women are in need of those services.

Unfortunately, there is a debate out there amongst some that would say that self-id will lead to predatory male pedophiles or sex offenders using the changing rooms at, say Topshop, to abuse someone.

All these kinds of abuse are covered under existing laws and safeguards.  If safeguarding against sexual predators is is in any way inadequate, then I’d be the first to argue for strengthening them.

It’s really important to remember that proposals to reform the Gender Recognition Act wouldn’t change access to single sex spaces.. No-one is checking gender identity certificates at the doors of changing rooms and no-one proposes that happens in the future.

What is the future for Stonewall?

In the last two or three years we’ve, particularly here in Wales, invested a lot of our time and resources into what some people call inter-sectionality and, challenging some of the prejudices inside our own communities, as well as asking for allies.

So, a lot of our work is trying to win people over to become allies to LGBT people. And I for one regularly say: “You can’t call yourself my ally, me as a gay man, if you walk out of the room and spout misogyny or racism.”

At the same time, we as LGBT people, need to be allies to other communities. We need to recognise some of the real issues within our own communities.

The future for our work is to explore, even more so, the vast array of experiences that exist within the communities. In recent years, we’ve taken on the transgender part of our work for the first time formally.

We need to stand up to structural misogyny, which is to blame for so much homophobia, actually.

And, we need to invest our resources in ensuring that we are not a charity for rich or privileged, white gay men. But that we serve all the variety of experience within our communities.