This is why Wales is poor: UK Gov has no intention of investing in our prosperity

The contrast couldn’t be starker.

It was revealed at the beginning of this week that the cost of the high-speed rail link between London and Birmingham, HS2, had ballooned to £104bn, or £403m a mile.

And this morning it was announced that a promise to electrify the Great Western Mainline from Cardiff to Swansea had been ditched by the UK Government.

Instead, we’re being offered a fleet of slightly faster bi-mode trains which are less efficient, heavier and costlier to run than the electric-only stock that was promised.

There is a Welsh idiom that is appropriate here – I’r pant y rhed y dŵr. It literally translates as ‘the water flows into the ditch’, but it means ‘wealth flows to those who are already rich’.

This largely sums up the relationship between Wales and the south and middle of England when it comes to investment in the kind of infrastructure that creates further prosperity.

On paper Wales receives more money per head of the population than any part of England (apart from London of course), but it never seems to be spent on projects that would allow us to reduce our dependency on the UK Government’s largesse: 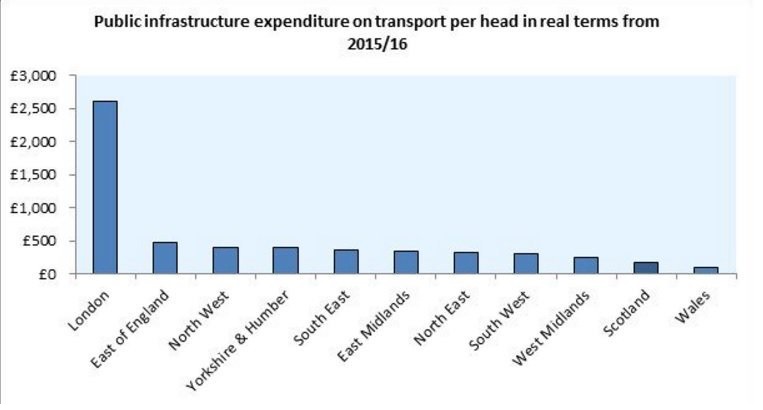 The UK Government will, of course, argue that HS2 is simply responding to demand.

The West Coast Main Line, which connects the major cities of London, Birmingham, Glasgow, Liverpool and Manchester, is at full capacity.

But this is a circular argument in which Wales will always lose out.

The lack of a half-decent road or rail link between the north and south of Wales is a good example.

It is argued that such a route would be pointlessly expensive as there are very few economic ties between these artificially created regions anyway.

But prosperity follows the path of least resistance. The journey between north and south Wales is so mentally and physically torturous it’s no wonder very few use the roads.

We’ve been here before – exactly the same ‘low demand’ argument was made against developing transport infrastructure in what was rural Wales in the 19th century.

What was the point of building expensive tracks and trains to connect what were at the time small, rural hamlets?

The Denbigh business man and owner of the Faner newspaper, Thomas Gee, answered those concerns thus:

“I need not tell you, sir, that the principal value of a Railway consists in its power of development,” he said.

“Our project will develop the resources of this district, stimulate the energy of its inhabitants, and open such a field for its slumbering surplus capital, that the population will be increased at least ten-fold, and we may see property considerably enhanced in value.”

He was right, of course. Tiny populations living in poverty became the prosperous towns that we know today.

He went on to lay out a vision of a Welsh economic corridor that would be united by the ‘iron roads’ built across it:

“Indeed, the whole of Wales, from Offa’s Dyke, in Flintshire, to Carnarvon, and Holyhead, in Anglesey-the whole districts, from Rhyl to Ruabon; from Ruabon to Newport, in Monmouthshire; and from Newport to St. David’s, in Pembrokeshire, will all be once more drawn together by that iron band- which was devised and is forged by the science, intelligence, and industry of the 19th century, and which diffuses unity and prosperity wherever it extends.”

If only our politicians had the same vision today!

Unfortunately, the sad truth is that a lack of investment in Wales compared to London is probably as ideological as it is based on economic judgement.

Money is power and its suits the elite that this power is concentrated at the UK capital. Meanwhile, the less money – and therefore power – Wales has, the better.

That graph is horrendously misleading. The London figure is skewed by Crossrail – one of the biggest civil engineering projects in the world (which will benefit Wales well as much as a project 150 miles away can do). Can we please have a sensible debate about transport infrastructure? It’s not fair to take the costs of Crossrail or HS2 and compare it to 60 miles of GWML electrification for example. Most commentators on this site would favor an independent Wales and how would that independent Wales pay for a the M4, electrification to Pembroke Dock and Carmarthen to Aberystwyth? This… Read more »

So the graph is skewed by a massive infrastructure project going on in London – well isn’t that the point? And it will be continue to be skewed in the near future as Crossrail 2 in commissioned, and whatever massive infrastructure project follows that. I agree that the costs of HS2 and 60 miles of GWML electrification can’t be compared. The first is of dubious value for the price tag while the second would have very clear benefits to the south Wales economy. And the second is a drop in the ocean compared to the cost of the first. But… Read more »

So HS2 has a dubious value for money yet you know for a fact that GWML electrification will bring clear benefits do you? Crikey get yee to the DfT!

My point about Crossrail is whilst the money is spent in London it’s benefits will be felt far and wide (take a look at the number of Welsh firms in the procurement and construction side of things long before any passengers use it). So IMO that project shouldn’t be included in any comparisons.

I also note that you left Northern Ireland of the graph.

You can justify any infrastructure project on the basis that a few crumbs will fall off the table for Welsh companies. That doesn’t deal with the central point however which is that Wales faces chronic under-investment in its infrastructure. What would really benefit Wales in the long term is an improvement in the transport infrastructure of Wales.

It’s not my graph – no idea why NI isn’t on there, but I doubt it would change the picture much.

London Government knows nothing about and cares less about Wales. Its time Plaid Cymru campaigned for a FREE WALES!

There are talks of a Crossrail 2 and 3 as well as the HS2 white elephant. At what point do we call out the London-centric bias of infrastructure spending for what it is – a huge subsidy for the south-east of England from the rest of the state? I fail to see how Crossrail benefits anything but a tiny minority of people from Wales who may need to commute to the east of London.

Foe goodnes sake Gareth it would help Wales far more if our tax money was spent here on much needed infrastructure projects constructed by Welsh companies rather than send our money down the London plug hole.

“it would help Wales far more if our tax money was spent here on much needed infrastructure projects constructed by Welsh companies” Lovely sentiment but Wales is a net beneficiary financially from being in the UK (I know that’s going to be unpopular opinion on this site) – checkout the figures: http://sites.cardiff.ac.uk/wgc/files/2016/04/Government-Expenditure-and-Revenue-Wales-2016.pdf (page 4) Don’t get me wrong – I want to see a bigger, stronger, more prosperous Wales – but personally I want to see it as part of the UK (and ideally the EU but that ship has sailed). If you want to go down the isolationist route… Read more »

I recall working with communities in the Ebbw valley when the Ebbw valley line was being constructed. I forget the precise figures in the business case for the development but they were along the lines of expecting the line’s millionth passenger to be carried in the line’s fourth year of operation. Demand was actually such that that passenger boarded the train before the first year was out. If that business case so poorly judged demand (no doubt made on the usual lazy assumptions about the Valleys), have all the others?

Gareth those figures are bullshit guesstimates (called estimates) see for yourself. I’m an economist and I can tell you those figures miss a huge number of things the London centric people want you to believe the bullshit they dish out. The don’t keep or collect proper detailed accounts for Wales as the can be used against them.

Gareth, let’s start with the fact that there are almost no facts to discuss on the Welsh economy. I’ll tell you that to asses wales’s economy you need to know how much people have to spend in the country, how much is invested in Wales, how much the Welsh government spends, what the country’s export and imports are, how much is saved and the total tax paid in Wales. That’s seven separate bits of data, and we only have reliable figures on some of what the government spends. As for the rest, the Revenue in Wales is struggling to work… Read more »

Following on from my comment to Gareth, if anyone says Wales is running a deficit or anything else ask them how they know (not guess). If it was essential that Wales needed the data to manage its own economy then London would have to agree to its production. But in England they do not think it is important that Wales has its own economic data, so it does not measure it. It sends half hearted guesstimates instead, and in the process it makes clear that it is contemptuous of the Welsh government managing the Welsh economy which is clearly not… Read more »

Thank you Dafydd that was interesting. It is clear to me as a new immigrant to Wales that the way Cymru is run is unsustainable. The UK government couldn’t care a less about our country. One road out to London at the bottom one out to the north west of England conurbation at the top, conveniently offering a route to Ireland. Have had the need to travel to Holyhead and Manchester recently, once by train once by car, they are shocking journeys. For Gareth to say Wales gains from HS2 and Crossrail is nothing short of ridiculous. By that argument… Read more »

By nature of history Wales can’t do well out of anything based on “business case” or “value for money”. We’ve got to take a punt and build projects like Carmarthen to Aberystwyth. The argument from Gareth in the comments above seems to be “well because you want independence, you can’t complain about any UK transport decisions”. That’s absurd. We aren’t independent yet. The message to Westminster should be Give us control over rail infrastructure, or do your job and upgrade our network. Gareth’s message to Westminster would be “thank you for allowing us to be a net beneficiary of your… Read more »

What next for the Welsh Economy? Two key announcements this week painted an incomplete, uncertain and mixed future for the Welsh economy.  At the mid week stage it seemed that the UK Government gave with one hand and took away with another.  Swyddle

[…] sparked disbelief from the Welsh Government and wider National Assembly, re-igniting the age old arguments of Wales being traditionally underfunded.  This underfunding has been seen as particularly acute in terms of rail infrastructure, where […]

When we got Objective-1 money, look what our (Labour) government did with it. Hardly invested in wealth-generating infrastructure. And never an Inquiry into the failure, so we can’t promise to do better if given the chance again.