It wasn’t the most surprising conclusion of the Thomas Commission’s work – colloquially named after its chair Lord Thomas of Cwmgiedd, a former Lord Chief Justice of EnglandandWales – but the report published yesterday marks another milestone in Wales’ devolution journey.

The full report is incredibly thorough and it didn’t leave anything out – though it’s a bit of a whopper at 556 pages.

Thomas Commission: Justice in Wales for the People of Wales

What’s wrong with the current system?

As things stand, criminal justice is non-devolved to Wales and is run on an EnglandandWales basis – which is a contrast to Scotland and Northern Ireland, both of which control the legal system (policing, prisons, courts, legal professionals, probation) and are separate legal jurisdictions in their own right.

The Commission found some deficiencies in the current system which directly impacted Wales.

Complexity – The Welsh Government and Senedd have some responsibilities in relation to the criminal justice system (mental health and education of prisoners, police funding, domestic violence, community safety, tribunals, some aspects of the family court), yet no real power over policing, probations, prisons, courts (generally) and “most areas of substantive law”. This split responsibility hinders the development of effective policy and some areas of law have already diverged significantly between Wales and England. The complexity in terms of administrative structure is probably best demonstrated in a single image: 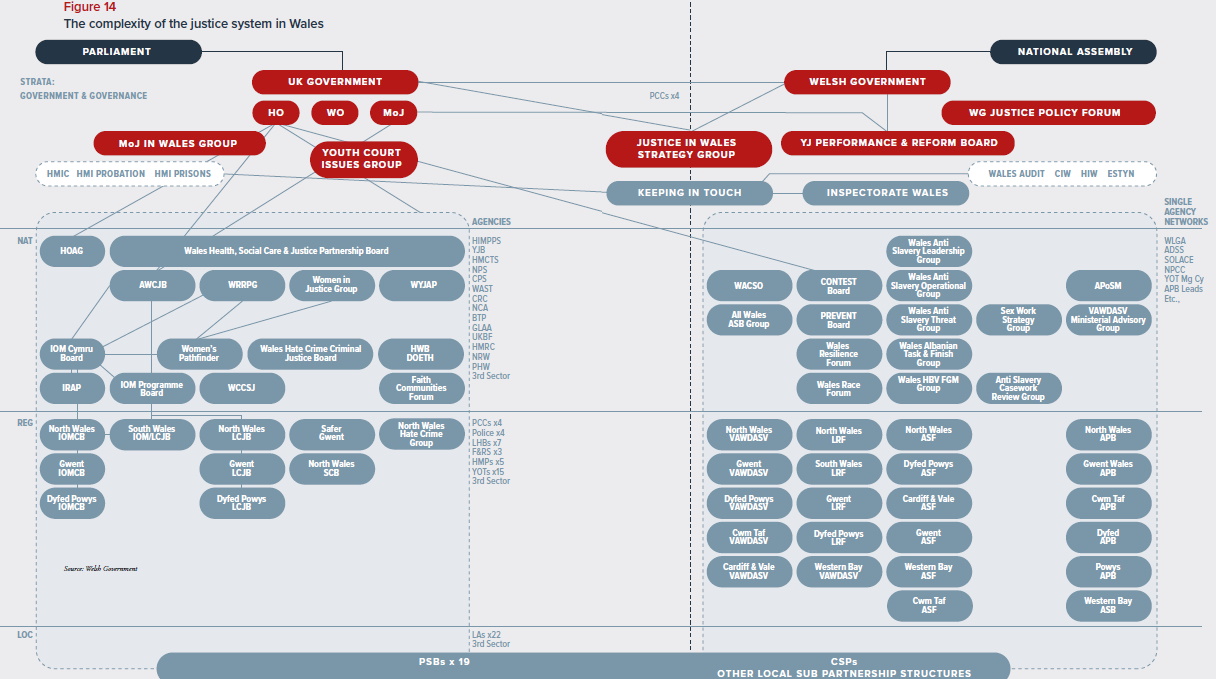 Access to justice – Cuts to legal aid since 2012 have hit Wales hard. In 2018-19, around £80 million was spent on legal aid in Wales – lower per head of population than England – but the UK Ministry of Justice has also had one of the largest real-terms cut to its budget since 2010 (-27%) and any shortfall has been made up through Welsh Government-funded advice services. Many law firms in Wales no longer do civil and family legal aid work and there’s been an increase in the number of people representing themselves in court (particularly civil cases) or going completely unrepresented which places extra pressure on court staff and can lead to longer trials.

Court facilities – The majority of cases where Welsh public authorities are being challenged are heard outside Wales despite an expectation since 1999 that cases against Welsh public bodies should be heard here. 27 courts have closed in Wales since 2010, often in rural towns. In some cases (Anglesey) it results in a 90-minute journey on public transport to the nearest court at Caernarfon. 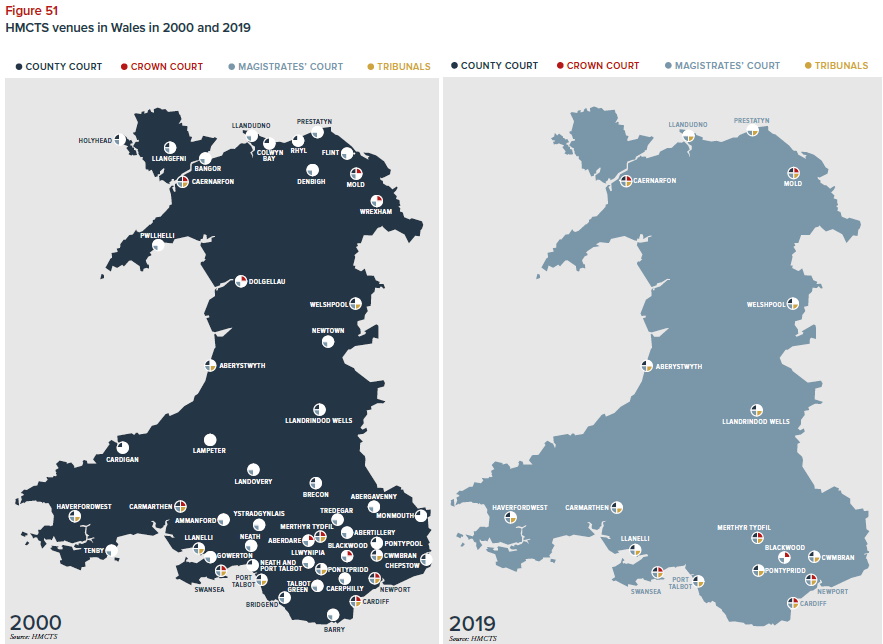 Finance – Just under 4% of the Crown Prosecution Service’s budget (£20 million) is spent in Wales – slightly below our population share. Welsh and local government provide up to 40% of the criminal justice budget in Wales (which totals just over £1.17 billion). There’s a particularly complicated arrangement for policing funding, which is non-devolved despite council tax precepts and Welsh Government grants making up 63% of the policing budget.

Diversity – Just 1.8% of police officers, 3% of judges, 3.8% of prison officers and 5% of magistrates come from a minority ethnic background (BME) in Wales. The only area where BMEs are over-represented is tribunals (9%). In every police force area, the number of BME officers is less than the resident BME population. 9% of prisoners being detained in Wales were BME.

Rehabilitation – Wales has the highest proportion of offenders who re-offend (around 45%). Most of the Welsh prisoners are deemed acceptable though Cardiff is deemed a cause for concern. Self-harm incidents have skyrocketed in Welsh prisons since 2008 from 381 to 3,024.

The legal profession – Undergraduate and postgraduate law courses are well-subscribed, though the majority of solicitors are based in southern Wales and just 9% in mid-Wales. The number of practising barristers in Wales has gradually increased from 275 to 360 between 2010-2019, though the majority are based in chambers in and around Cardiff. The legal profession was said to be worth around £431 million to the Welsh economy – almost as much as agriculture, forestry and fisheries combined – though it’s still just 2% of the UK total. The Commission believes the legal industry in Wales requires better promotion and its one of the sectors most keenly affected by the “brain drain”.

Bilingualism – There’s no right for a defendant to insist on being tried through the medium of Welsh (because it would affect the principle of a random jury selection), though Welsh can be used in the courts generally and was used in around 1,000 court and tribunal hearings in 2018-19. Fluency amongst police officers is mixed with relatively high proportions of officers in North Wales and Dyfed-Powys being Welsh-speakers but just 2.6% in Gwent. Up to 39% of judges can speak Welsh and around 100 law students learn through the medium of Welsh every year. There are more legal rights for Welsh prisoners to use Welsh in Welsh prisons but, as noted earlier, a large proportion of Welsh prisoners are detained in England.

What additional resources would be needed to devolve criminal justice to Wales?

As mentioned previously, total spending on the justice system in Wales was just under £1.17 billion in 2018-19 and it was estimated up to 40% of this (£468 million) was raised and spent by the Welsh Government and local government. That suggests that to cover the cost of justice (as it currently stands) the Welsh block grant would need to be increased by just over £700 million a year – which in the context of a £16-17 billion Welsh budget (out of an estimated £27 billion in Welsh tax revenues), isn’t that much at all.

To put it in perspective, Wales contributes (proportionally) more to the UK’s defence budget (around £1.8 billion a year according to the latest GERW report – pdf p43) than is spent on nearly the entire criminal justice system here.

A Welsh Government estimate suggests it would need (in terms of the civil service) an additional £14 million a year and 200 staff to take on responsibility for justice. Although the report didn’t mention it, there would almost certainly be a cast-iron case for more AMs, which would increase running costs there too.

The response from Westminster/Whitehall was utterly predictable and once again betrays the fact that they still have an 18th century centralist mindset. At the end of the day, we will be forced to chose between total assimilation in a downward spiraling “Englandandwales”, totally dominated by an overcongested S.E. England, or independence as a progressive European state.

Indy in Europe, please Tudor!
I already know how things can improve given those conditions, as I live in Finland most of the time.
Since joining the EU, Finland has changed for the better, and of course, we have all seen the
“Europeanisation” of food and wine, cultural events and so on………………

It sounds like it is a very interesting document. I can see the bureaucratic convenience of a one-state police force; however, you can see accountability, delivery and resources suffering the same drawbacks than afflict all one-state organizations. Devolution should mean devolution not just moving the power nexus from one location to another single location.