There are only two times I have ever been jealous of my friend from Donegal.

One was when the Republic of Ireland beat us to knock us out of the World Cup running.

The other was when he was invited to a lavish dinner in London, hosted by his President, to celebrate the contribution of Irish people in London.

It wasn’t so much that he got to go to a posh dinner. It was that despite leaving Ireland, his country of birth was going to great lengths to acknowledge his contribution to it.

The way Wales treats its ‘expats’ couldn’t be further from the Irish model.

Our ‘brain drain’ problem is well documented but we compound our error by acting as if these brainy people, on leaving Wales, cease to be Welsh at all.

Unless you are a celebrity, you are actively disowned as Welsh once you leave the nation, even if you want to help promote the land where you were born.

You are treated as a deserter, as opposed to a child of the nation and someone who wants to continue to contribute and pay something back to the nation he or she loves.

Compare this with the way English people who move to Wales are treated. They are welcomed with open arms and treated with reverence.

We have to acknowledge that there are an awful lot of people who find themselves having to leave Wales to earn a crust but love their country and would like to promote it any way they can.

‘Gorau Cymro oddi cartref’ as the Welsh language saying has it – The best Welshman is a Welshman abroad.

There are a whole army of amateur diplomats, tourist promoters and business development officers around the world waiting for guidance about the best way to talk up Wales.

Once again, compare with Ireland where the diaspora have done such a good job of promoting their identity in countries such as the United States.

Half the country seem to want to claim Irish heritage. But how many are descended from the Welsh but don’t even know what Wales is?

The difference is that the Mothership (I.e. Welsh politicians of all shades and other national institutions) see Welsh expats as a novelty at best; an embarrassment at most.

Tick box visits are made to New York, Chicago, and London on St David’s Day in some vain attempt at acknowledging Welsh people exist outside Wales.

But the truth is Wales has no real steer on its diaspora, whereas the Irish and Scottish Governments have invested billions of pounds over the years in courting them.

Look at Scotland’s successful ‘homecoming’ years in 2009 and 2014, where they encouraged people with Scottish ancestry from all over the world to visit the country.

The only diaspora data I’ve ever seen for Wales is a map of how many Welsh live in London Boroughs which is trundled out every year on Twitter by the London Welsh Society to promote their Welsh week.

The brain drain doesn’t have to be a lost resource – not if these people bring investment back with them.

By ignoring Wales’ diaspora, we also ignore what is an uncomfortable truth for many – that the Welsh language is actually in a much better condition than is admitted.

We only see the census data for how many people speak Welsh in Wales, which ignores how there are tens of thousands who speak the language elsewhere in the world.

I went back to my old school in Bridgend the other week and told students how I continue to use Welsh in my everyday work and social life, despite working in Northampton and living near Cambridge.

The kids were shocked. They thought Welsh could only be used in Wales.

This is about having a wider, untapped army to promote business and culture. I cannot think of a single job I have had in the 25 years I have lived in England where I have not worked with someone from Wales.

My latest role as Senior Lecturer in Journalism at the University of Northampton has seen me team up with a Wrexham-born business lecturer and work closely with the local football and rugby clubs containing some blokes called George North and Regan Poole.

The other day, me and Sarra Elgan were having a chat in Welsh in the players’ tunnel at Northampton Saints.

If you look at the writing about the door (below), from 1595 AD, you will see that it’s in Welsh. Yes, the Welsh Language, being used in England. Shocking, eh? 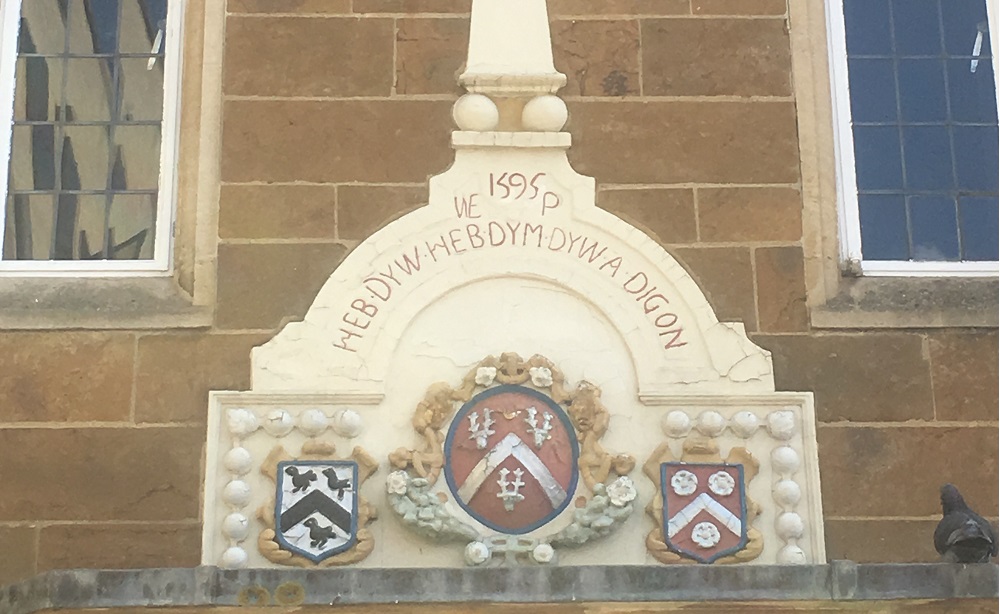 You would never know about the links Wales has with Northampton. Or Nottingham or Blackpool or Shanghai, etc etc, because Wales does not know enough about its sleeping army of advocates (outside the London Welsh tickbox).

Make 2018 the year you Engage An Expat and see how Wales could fly like Ireland and Scotland did when they embraced their diaspora.

Yet others posting here question the role of Stuart Andrew at the Welsh Office? Even if he does not represent a constituency that happens to be geographically in Wales (which would be preferable, of course) surely in the context of the above he is still able to make a valid contribution.

I wouldn’t say that every English people who move here are welcomed with open arms. There was a comment on this very site only yesterday questioning why Angela Burns and Dawn Bowden were allowed to be Assembly Members given they’re not Welsh.

Friendly rivalries over sport is one thing.

But going back to the point of this article, yes we should respect our expats and wish them well, equally we should welcome people with open arms those who move here, be they students, professionals or retired folk – regardless of which football and/or rugby team they support.

Explain exactly why you think Wales should welcome with open arms people who come to live here. What conditions would you wish to impose regarding, for instance, property ownership in areas where housing is unaffordable for local people, business ownership, genuine commitment to Welsh language and culture.

Refreshing piece to read.Much in similar vein written by David McWilliams re the Irish and their international outlook.Feeling pride in your origin not to be underestimated.

It supports a network of Finnish Saturday Schools throughout the world for ex-pats and their children. There’s one in Cardiff http://suomikoulucardiff.org/

Would be great to have something similar for Wales, in particular to teach Welsh.

As a Welsh expat of nearly 40 years – I wholeheartedly agree.

There is globalwelsh.com, something that has been pushed forward by people thinking along these lines, which I think might have attracted a bit of WG attention and perhaps a very small bit of funding?

I agree with the core argument in this piece. I’m a Welshman living in NW England, originally for reasons of work and more recently because I have brought my immediate family up here and the children now live not too far away. I love Wales, get back frequently and champion the country whenever I can. But unlike the network of Irish clubs across the main towns and cities of the UK there is little in the way of a social framework in England to act as a focus for the ex-pat Welsh community. Perhaps social networking sites can provide a… Read more »

This is a startling article to me, as an American of Welsh descent. I was under the impression there was an active connection between Wales and the Welsh Diaspora. Groups like Undeb Cymru a’r Byd in Wales come to mind, plus numerous Welsh North American groups, US-Canada wide and local (as chronicled by David Greenslade in “Welsh Fever”). I volunteered as a foreign propagandist for the Welsh home rule movement for ten years prior to the 1997 referendum. No, I think Mr Webber can find the links if he looks for them, and I’d be glad to help him.

Perhaps the Welsh diaspora have better links to Wales, than we in Wales have to our Diaspora.

Would you act as a propagandist for an upcoming Welsh Independence referendum too? I’ve always been impressed by the “can-do” mentality of Americans. We need more of it back here in “Cymru fach” too!

To say things are confusing about Welsh identity is to acknowledge the diversity of those living in Wales and came with the rush associated with the finding iron ore and coal in Wales. Wales for this reason is and always will be cosmopolitan. The movement of people into and out of Wales is amply explained by the drover trails, Patagonia, America, Austrlia and many more. Free movement of people across the world will always be a common state. It’s gathering pace and linked to an enterprising culture. To somehow seek to distance Wales from Europe and vote to leave the… Read more »

How many people realise that the blue lion on the crest of Chelsea football club is the symbol of an old Welsh family, Cadogan/Cadwgan, which is Viscount Chelsea’s family name. According to Burke’s Peerage, the family descends from: Rees ap Griffith ap Llewelyn ap Meredith Bengoch ap Howell (Lord of Penbuallt) ap Sitsylt (Lord of Builth) ap Llewelyn (Lord of Builth) ap Cadwgan ap Elystan Glodrydd (“The Renowned”), Prince of Fferreg, of Dol-y-Gaer, Breconshire. So when England captain, John Terry, kissed the Chelsea badge he was actually kissing an old Welsh symbol. Of course, it’s quite possible he’s kissed many… Read more »

My favourite annual event when living in Kuala Lumpur was the KL St David’s Society’s Ball on March 1st. 300 people (only about 10% Welsh, the others there to celebrate Wales), plenty of food and drink and a Malaysian Tom Jones impersonator!

GlobalWelsh is all over this and implementing a diaspora engagement plan based on ‘best practice’ identified through research carried out in 2015. We are a grass roots, private sector initiative started by six entrepreneurs that have invested money and a great deal of time over the last four years. Check out http://www.globalwelsh.com where you can become a member, pioneer, submit Wonderful Welsh stories, submit Call Outs, offer support, connect to Welsh people all over the world and much more.

You learn everyday, not least from Huw’s contribution of the Chelsea Football Club motif and its origin. How ignorant we are of Welsh heraldry, and the most familiar of things we take for granted. It’s why I see the efforts of Dai Lloyd and a recent contribution from Rhun ap Iorwerth on the need to do all we can to preserve Welsh names on all buildings and Locations wherever they rest. I wish people who seek to change these names, read contributions from those like Dai Lloyd, Dan Snow and others, on what history means to everyday life. Whatever your… Read more »

Rather belatedly I’m trawling comments on “Wales needs to enlist its Ex Pat army ……. That’s my excuse. But surely there’s a prejudice that once a native born Welsh patriot moves out of Wales there’s a switch of allegiance or customs. Once Kelly Jones of the Stereophonic’s correctly referred to ‘ you can take the boy out of the Valley but you can’t take the valley out of the boy’ . What a waste when countless of those with rich talents lie dormant, waiting for contact or reference points to make a contribution to their country of origin. The web… Read more »