What Twitter data can reveal about our Assembly members

Social media has now become one of the major tools of political communication. All candidates have Facebook pages and Twitter accounts and all parties spend considerable amounts of money on Social Media advertising.

During the 2017 general election, over £170,000 was spent on Facebook advertising in Wales alone, and the figures across the UK and in the US are extraordinary.

Whilst there is less paid advertising on Twitter, it is the tool of choice for free political communication. In the US Donald Trump has over 60 million Twitter followers and uses the platform to get his messages directly to his supporters.

In Westminster politics, Jeremy Corbyn has nearly 2 million Twitter followers whilst other leading MPs have 100,000s.

With the use of their smartphones, politicians can circumvent journalists and communicate directly with their potential supporters. This is an amazingly powerful tool which has been adopted by nearly all politicians in the UK.

Whilst it isn’t easy to know how politicians and political parties are using paid-for social media advertising to target voters, everything they promote on their own timelines is publicly available.

This is a massive opportunity for data analysis as this is a very large and rich data set which can be used to keep track of what politicians are saying, and how they are interacting with each other.

The website mpsontwitter is a wonderful tool to see what is happening in Westminster. We can see which tweets are being liked and retweeted, we can examine which MPs have the most followers (previous Labour leadership candidate Owen Smith is the top Wales based MP with over 74,000) and can look to see which MPs are gaining and losing followers.

We can also look back to any individual week we like and examine what was happening on Twitter at that point.

Unfortunately, I couldn’t find any similar resource available here in Wales. To rectify this, since the start of 2019 I have recorded the 21,000+ tweets and the 35,000+ retweets that have appeared on the feeds of Assembly Members. Using this information, we can explore how AMs are using twitter.

Below is a plot of the hashtags which have dominated amongst Wales’ AMs this year (this is tweets and retweets by AMs). 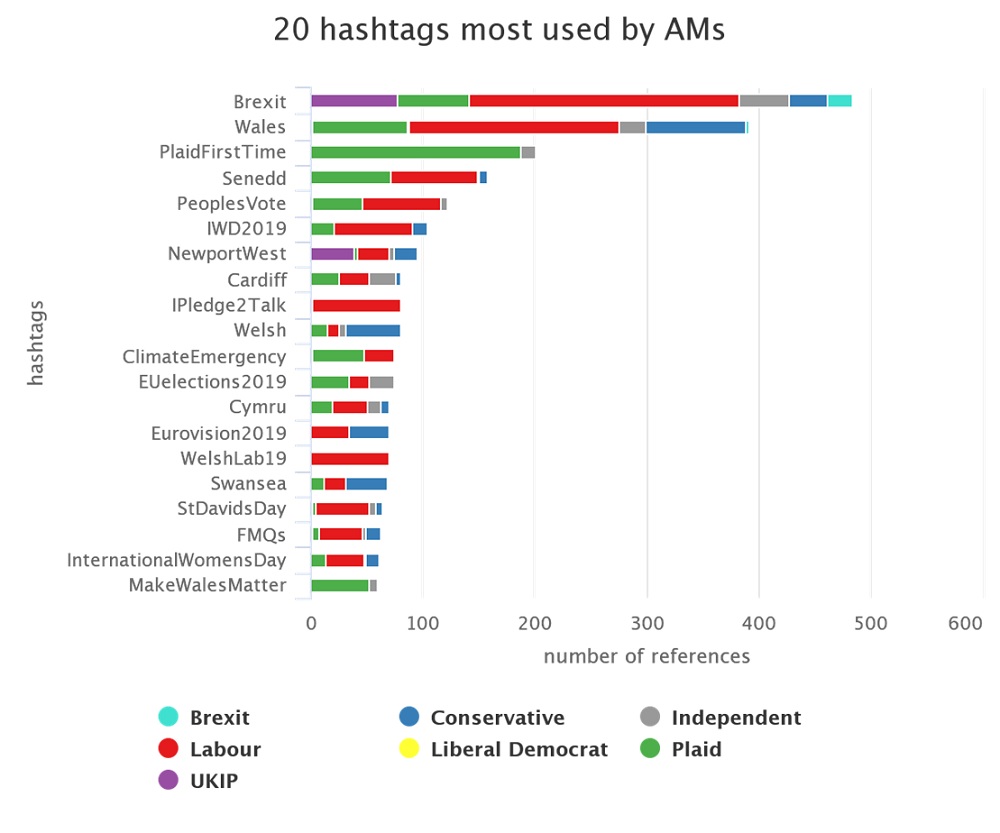 We can also look at which tweets are popular when. The following video shows the most popular hashtags amongst AMs each week.

Sport-related tweets are in Red, #Brexit in yellow and #Wales in green. The size of the circle is proportional to the number of tweets.

What’s clear from this is that Brexit has, unsurprisingly, been a constant topic of discussion in Welsh political Twitter this year with nearly 500 AM tweets or retweets including #Brexit, and every party part of the conversation.

We can also see that our AMs used Twitter to campaign for votes, namely in the Newport West byelection, the European Election (although no single Tory AM has used #EUelections2019) and Eurovision!

Some online campaigns were also successful at gaining twitter traction from AMs, with the #ClimateEmergency, #IPledge2Talk and #InternationalWomensDay (#IWD2019) all being mentioned repeatedly.

Another hot topic that this data can help us answer is the importance of social media on a politician’s decision to use the Welsh or English language.

Social Media has the advantage of letting people have political conversations in Welsh, whether they are in Cardiff, Caernarfon or Cleveland. However, if a discussion involves non-Welsh speakers then it will generally be completed in English.

The following plot looks at the language chosen by Assembly members in their tweets and retweets sorted by their percentage of Welsh language tweets.

This shows that half of Elin Jones and Siân Gwenllian’s tweets are in Welsh, and other AMs are using differing amounts of Welsh. 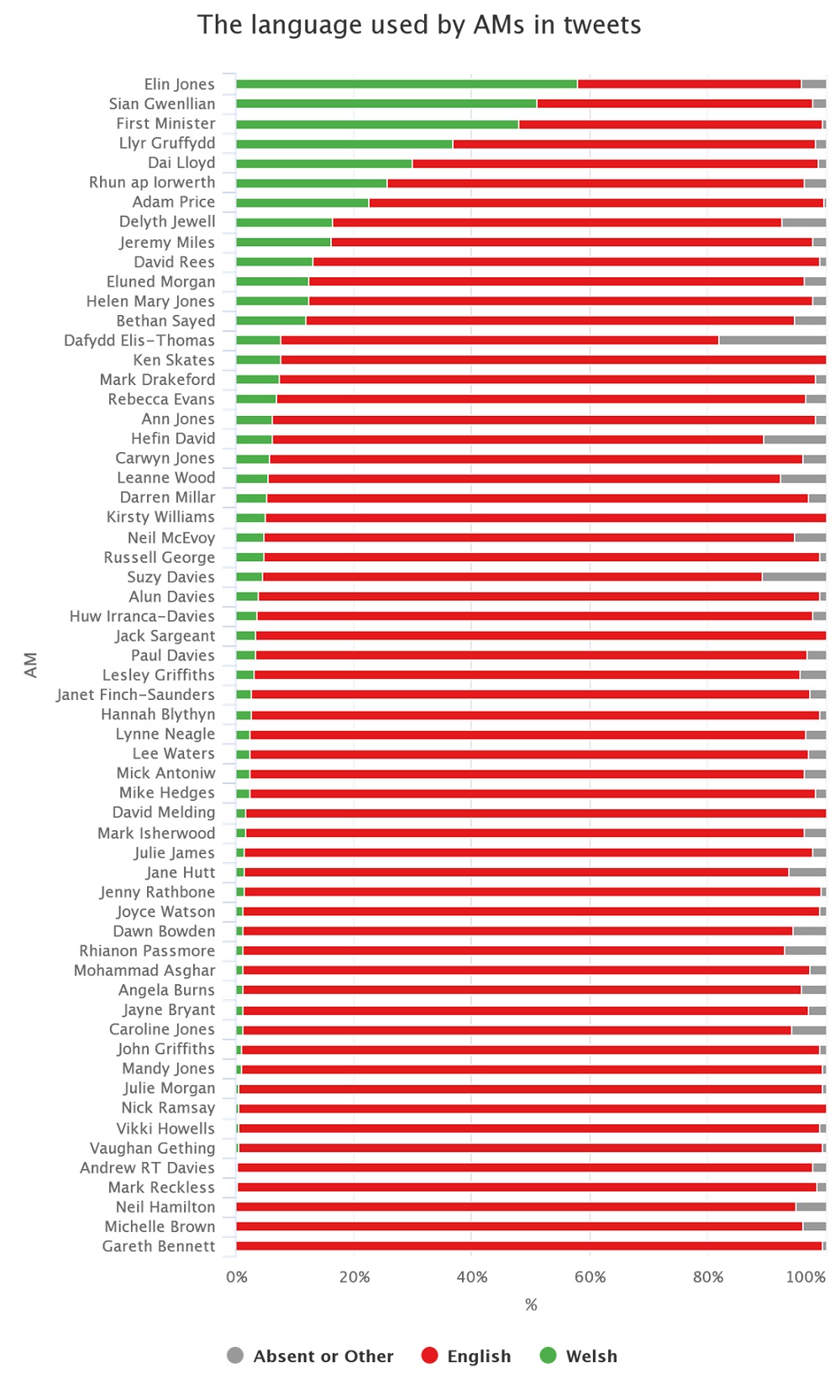 We can also look at the data excluding retweets and in absolute as opposed to percentage terms. This gives some context to the amount of tweeting being done.

We have 4 AMs who have written over 1500 original tweets since January the 1st. Bethan Sayed, Alun Davies, Neil McEvoy and Dawn Bowden each average 10 tweets a day even when we remove retweets.

Their tweeting includes a large number of conversations. Whilst Bethan Sayed has a lot of Welsh language tweets and Alun Davies has more than any other Labour AM they make up a small percentage of their overall tweets. 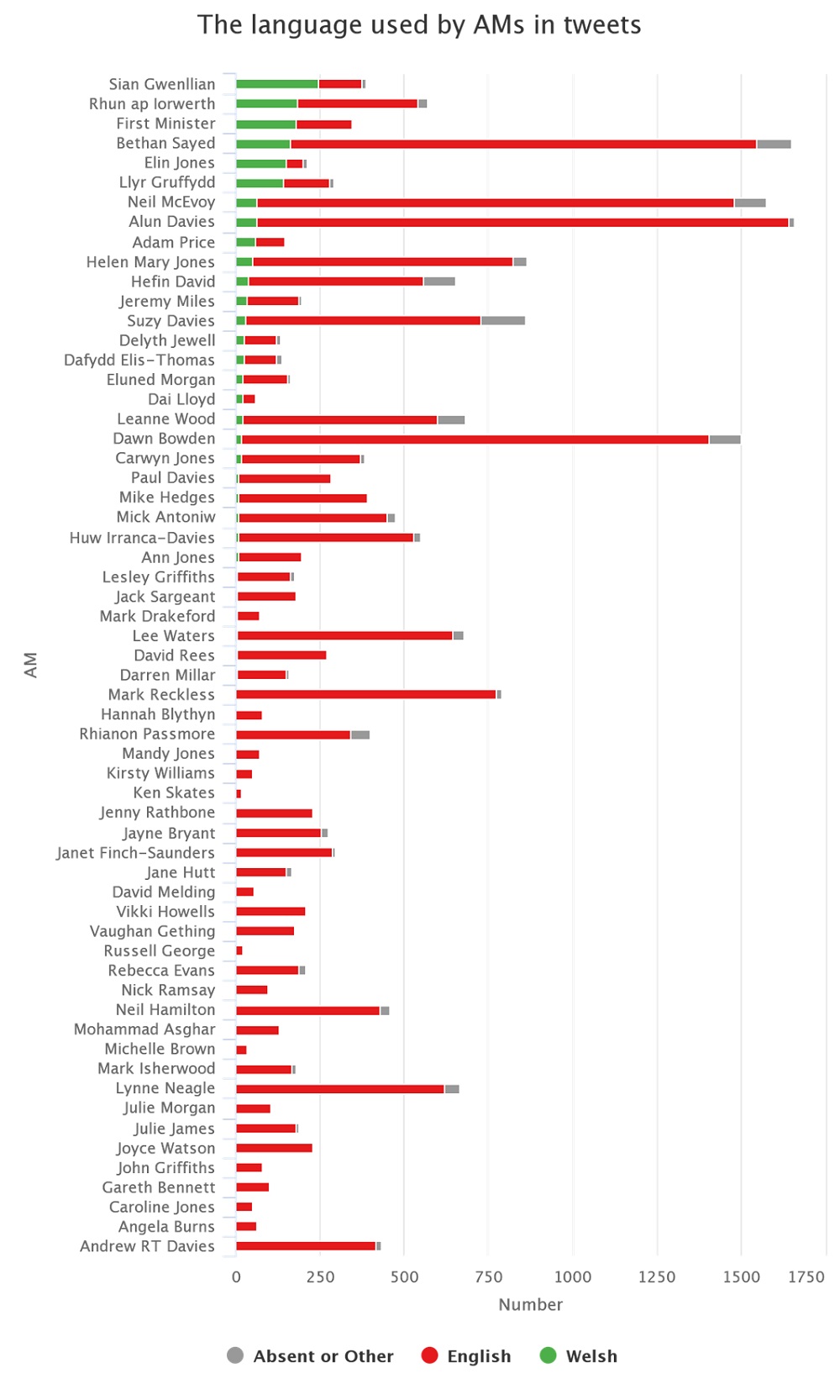 All of these graphs can be interrogated at DwdlData where you can also search through tweets to see what has been said and which AMs were responsible for all of the Eurovision tweets (Alun Davies and Suzy Davies)!

You can explore the weekly hashtag bubble plot here and also look at the bubble plots for different political parties (Brexit and UKIP are a bit different to the others).