Whatever the UK Government claims, we still don’t have real control over Wales’ water 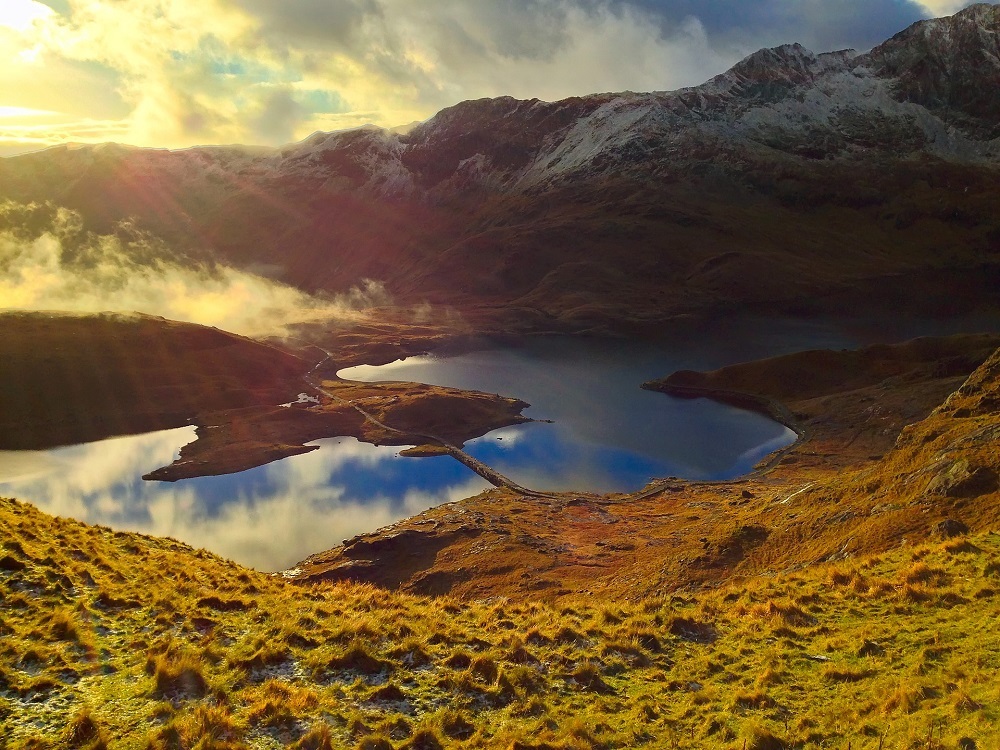 Simon Thomas, Plaid Cymru AM for Mid and West Wales

Water is an emotive subject in Wales. And for good reason.

The development of water resources in our country for the benefit of English conurbations is a central factor behind the rise of Plaid Cymru and of Welsh nationalism.

The drowning of Capel Celyn had both symbolic and physical effects, proving that Wales didn’t have a voice, and demonstrating a disregard for the Welsh language and its communities.

The exploitation and development of other natural resources like coal is another part of the same story, with resources extracted with no regard for the workers, communities and indeed the nation.

We didn’t see the benefits but had to pay vast human and environmental costs in the form of industrial accidents, illness, waste tips and in the case of Aberfan, innocent lives.

Stewarding and using our resources more sustainably and humanely is an obvious political goal for those of us who want to stop Wales being the victim and build a better nation.

Because of the emotion behind these issues, citizens of Wales would be forgiven for thinking that the announcement of a joint water protocol behind the Welsh and UK Governments gives us real control over our natural resources.

Indeed, that was the spin deployed by the Wales Office, which now brands itself the ‘UK Government in Wales’.

But the protocol does no such thing.

What happens in the protocol is that the veto power held by the Secretary of State for Wales and UK Government over our water is replaced instead by a joint veto held alongside the Welsh Government.

It allows for disputes between the two governments to be dealt with “in good faith” through discussions between officials and ministers.

It also allows for disputes to be escalated to the Joint Ministerial Committee if that doesn’t work.

I would remind readers that a dispute exists under the JMC arrangements over Brexit at the moment which does not appear to have been resolved. It is hardly a promising model for getting Wales’ voice heard.

But doesn’t this “prevent another Tryweryn”? I’m afraid that this is spin.

Another Tryweryn would thankfully be almost impossible under modern planning laws and environmental protections, which for all their faults have been overhauled since the 1960s.

Even more importantly, the water industry has been completely changed since then. In 1973 the industry was restructured and the Westminster government created a single Welsh National Water Development Authority.

Building new large-scale reservoirs would now be extremely difficult, and couldn’t be done without elected Welsh Government and National Assembly determining what the conditions would be. The protocol has almost nothing to do with this.

But in considering the future of our natural resources, I am not just interested in dwelling on the past.

It is unclear in the Wales Act 2017 whether water has been fully devolved. Currently, the industry is regulated by cross-border ‘England and Wales’ structures like OFWAT.

Unlike Scotland (where water is truly devolved), we have no national water regulator, no water industry commission, and no obvious government unity or entity overseeing policy relating to water.

Natural Resources Wales has some limited responsibilities over I do not detect any desire from the Labour Government to establish Welsh versions of these bodies in the short, medium or long term.

Neither is there any apparent desire to establish Wales-accountable sections of those England and Wales bodies.

This means that Welsh Governments can promote certain limited initiatives within the water industry (such as encouraging more efficiency), but have no clear accountability for the industry.

This is alarming when you consider that the UK Government has a clear intention to promote further competition and privatisation in the water and sewerage industries.

Furthermore, if and when Brexit happens, it is unclear where competence over EU water directives will lie.

As part of the EU, the Welsh Government is currently responsible for implementing seven EU directives relating to water (including the Drinking Water and Urban Waste Water Treatment directives).

These EU frameworks have been undeniably successful in raising the standard of drinking water across the EU.

Wales also participates in a joint academic programme with Ireland between Bangor University and Trinity College Dublin to address common challenges in the water industry.

We clearly need to take action in Wales to legislate so that our people continue to benefit from these high standards and programmes outside of the EU.

Plaid Cymru’s vision is for all of Wales’ resources to be regulated and controlled by our own elected governments.

The Welsh and UK Governments have presented no such vision, and this protocol fails to give us real control over our water.

Most of central England’s major rivers begin in Wales. Their unease is entirely understandable. Egypt is deeply worried by Sudan.

What’s needed is the dialogue enabled by a Wales in which the majority of seats are controlled by Welsh Nationalists, one where Westminster is not approached confrontationally but with a ‘look, let’s talk honestly about this as equals’ kind of mentality. That means we need to get down to it and win.

Mutually and equals. England still thinks as an imperial power and that is the problem.

Assuming we can get a Welsh Nationalist majority in the Welsh parliament, we will then need to be independent before we can really debate with England/UK gov as equals.
There is another way through some sort of federal system but do you see England actually voting for a Liberal Democrat or/and Green party majority soon that will make that possibly?

Yes, I do think England can vote Lib Dem. If people are given evidence rather than yelling and meaningless slogans.

Surely, any political party in Wales that wants to win power in Wales will add greatly to its credibility, and its chances of electoral success in the Senedd, if it adds direct Welsh control of Welsh water to its manifesto commitments? Plaid Cymru seem to have such a commitment, and if they retain it, they will retain my vote, especially if they also commit to securing direct control over Welsh taxation, as Steffan Lewis, AM seemed to advocate in a recent post. This is more like the Plaid Cymru of old, and exactly what I want to hear. Simon Thomas,… Read more »

Same with electricity isn’t it… this Norwegian undersea line is I suspect to make up the possible loss of Scotland. We on the other hand… as you say they won’t give it or us up without a struggle. But hey… if its not in their hands they may appreciate it and us more.

The UK Government was behind and complicent in letting Severn-Trent (ST) take over Wrexham water, OFWAT was incredibly put out when they found out that there was a real struggle to stop them just walking in, it cost ST millions more and a court case, but there was no support from the Welsh Government. Letting Severn Trent get control was to control the supply to the North West of England and give them a company wholly within any Welsh Regulatory system. Basically they want to retain control and will do it on multiple levels.

The Egypt -sudan comparison is not valid, as it supplies all of Egypts water and the river is being completely used up. Wales cannot stop the water flowing down hill to the Severn, however hard it may try. It is the building of large dams to control the flow that is the problem. Tryweryns water is no longer needed by post industrial Liverpool which now suffers a rising water table. So Tryweryn flows are used to create good canoeing experiences. Colli Capel Celyn er mwyn cynnal canwïo lloecr

A nice little ‘party political broadcast’ on behalf of the ‘Hide Behind The Sofa’ party Simon, or as it’s now known among many – ‘Labour’s Little Helper’. Too little, too late Simon bach. Thumbing through emotive subjects from over fifty years ago won’t do it gyfaill. The real heroes of that historic chapter in our struggle were Emyr Llywelyn, Owain Williams and John Albert, who actually DID something practical to stop the heartless stealing of our water resources. Gwynfor Evans and his fellow Plaid pacifists went on a protest march and all they got were creaming women who spat and… Read more »

Well i’m sure Simon will be having sleepless nights reading the colourful visions of ‘mystic gwilym’ 🙂 The lesson of Capel Celyn is the lesson Simon Thomas makes in his post – that we in Wales must have control over our own natural resources (which last time i checked happens to be Plaid Cymru policy). Have no idea what policy Gwilym’s ‘drummers’ party has on the matter – it doesn’t actually exist outside of a few posts on internet forums and therefore has zero policies on anything. And should the day arrive when it actually exists on the physical plane… Read more »

Oh dear Leigh. Dropping the standard down to school yard insults and wild statements with no knowledge of what is actually happening I see. I’d be careful about not guarding against a red face later on if I were you. Simon Thomas can make whatever point he wants in the Capel Celyn context. The point I was making was that Plaid during that period exercised the usefulness of a chocolate teapot, totally ineffective. All political gesturing and no substance when it came to actually being effective in doing anything meaningful about the problem. Marching to Liverpool in the hope that… Read more »

By the way, I remember coming across an investigation online revealing that many on the Dwr Cymru board were also on the board of directors in NatWest….and the DWR Cymru salaries to these people made a mockery out of the not-for-profit claims….anyone find the link? Can’t find it anymore

Dwr Cymru may be better than having an out and out listed plc /global corporate owner of our vital utility but only marginally so. Its Board has long been a haven for the usual suspects, people with good jobs elsewhere who have just retired, will retire soon or just very tired and in need of a good salary/fee for minimal effort. A jobs for the well connected boys and girls on a par with anything corrupt moribund Wales can lay on in the early 21st century.

I wrote this a few years ago, but I don’t think much has changed. It reveals the collusion between Plaid Cymru and the theft of our water resources.

An excellent, well researched document you produced there ‘glasiad’. Save a copy and send it as an attachment to Mr Thomas and his ‘wing man’ Mr. Richards. Just in case the reality of the situation hasn’t dawned on them. Especially these excerpts: “So where was Plaid Cymru “The Party of Wales” when this was all coming about? Should they not have been screaming “bloody murder” from the rooftops and exposing this farce called a ‘Welsh solution’? Yes, you’d think so … but no, not a murmur. Incredibly, Plaid’s policy on Water was written by a member of Glas Cymru (who… Read more »