In an opinion piece published on Nation.Cymru earlier today, Plaid Cymru leader Adam Price warned that “I have seen reports of a concerted attempt by some non-members of Plaid Cymru to intervene in our democracy.”

To what was he referring? Like ‘He-who-must-not-be-named’ in Harry Potter, Neil McEvoy’s presence hangs heavy over the article despite not being named in it once.

It is clear that the Plaid Cymru Assembly Group want shot of South Wales Central AM, Neil McEvoy.

Why? Plaid Cymru will refer to the charge sheet against him, which is a long one. It is not my place to judge what foundation there is to the accusations against him, and Neil McEvoy has publicly disputed their validity, so I will simply list the sources: 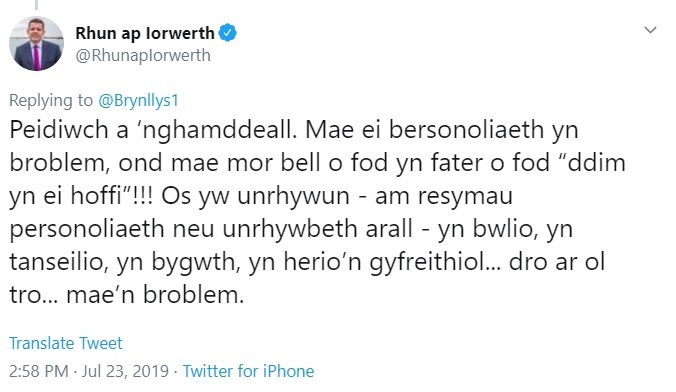 “Don’t misunderstand me. His personality is a problem, but it goes far beyond ‘not liking him’!” he says.

“If anyone – for reasons of personality or otherwise – bullies, undermines, threatens, challenges legally… time after time… it’s a problem.”

Earlier this month, Neil McEvoy dropped his bid to re-enter Plaid Cymru, alledging a lack of a lack of “natural justice” and “due process”.

At the time Plaid Cymru AM Helen Mary Jones claimed that Neil McEvoy was “not relevant to Plaid Cymru anymore”.

However, Adam Price’s words suggest that they fear a McEvoy comeback.

The vehicle for that comeback would seem to be Plaid Cymru’s own Autumn conference in Swansea, where a slate of prominent positions on the party’s NEC will be up for grabs.

If you look at the list of nominations something rather unusual becomes apparent. Plaid Cymru Cardiff West, Neil McEvoy’s turf, has nominated eight different party members to key positions.

Of the 30 nominations for key posts on the NEC, eight have come from one constituency – which is Cardiff West. This is more than any other constituency party.

What makes it more unusual is that constituencies usually nominate members from inside their own electoral region. Cardiff West have nominated candidates for Mid & West Wales & South East Wales as well as South Wales Central.

Dewi Evans who has been nominated as Chair has made it clear in an interview with Golwg360 that one of his main aims is to be able to welcome Neil McEvoy back into the party.

Heledd Gwyndaf has spoken alongside Neil McEvoy at his Propel meetings.

Jacqui Hurst has spoken alongside Neil McEvoy in a Plaid Cymru conference fringe event calling for a change of direction in the party.

It is no secret that both branches in the Cardiff West constituency – Canna and Fairwater – are supportive of Neil McEvoy.

Therefore, it is not perhaps unreasonable for Plaid Cymru to conclude that many of these nominated members have been chosen because of their declared support for McEvoy.

Of course, there’s nothing particularly wrong about this course of action, and no one is accusing anyone on the list of wrongdoing. There’s no conspiracy.

At the grassroots of a political party – the part that most voters don’t see – this is how politicians can expand their power base. This is exactly how Momentum took political control of the Labour Party, which lead to the rise of Jeremy Corbyn.

But what is clear is that Plaid Cymru’s Autumn conference could be even more important than last year’s leadership election in shaping the future direction of the party.

The change in leadership from Leanne Wood to Adam Price was not a huge one. But putting Neil McEvoy’s supporters in control of key posts within the NEC would open the door not just to McEvoy rejoining the party but also possibly to a completely different style of politics.

The result of these votes will rest completely on who attends at the Plaid Cymru conference at the Swansea Grand Theatre on 4-5 October.

Both McEvoy’s supporters and his political opponents will no doubt wish to ensure that they are in attendance.

Quite simply, if Plaid Cymru don’t stop demonising their most electoral asset, they will not only fail to unseat Mark Drakeford but will continue to alienate would-be supporters among the Welsh public.

How come Elin Tudor stood for South Central Regional Representative after a nomination from Pontypridd?