Tomorrow the Senedd will debate a petition calling for an Environmental Impact Assessment (EIA) to be undertaken ahead of any further dredged material from Hinkley Point being disposed of at the Cardiff Grounds disposal site.

This is taking centre stage as Electricité de France (EDF) seeks a licence to dredge huge amounts of mud from the Severn Estuary and dump it on a shallow sandbank less than two miles from Cardiff.

The Environment (Wales) Act 2016 requires decision-makers to take great care and to consult widely when there are uncertainties.

We argue that there are large uncertainties about how many uranium oxide fragments are in the mud, and about where they would go if dumped on Cardiff Grounds, how much genetic damage they would do to the population of Wales and whether the people who must make the licensing decisions understand the relevant science.

Nuclear reactors and nuclear bombs create microscopic fragments of uranium oxide. The UN has, in the past, reported on the amounts of radioactive dust emitted to the air from all nuclear power stations, including Hinkley Point and the other reactors that have operated on the banks of the Severn; most of that would have been uranium and many of the dust particles must have fallen into the waters.

There are also likely dust particles already in the Severn from other sources. Atmospheric (i.e. above-ground) nuclear weapons tests in the 1960s and ’70s vapourised hundreds of tons of uranium, contaminating the whole planet with radioactive dust.

When Chernobyl’s Reactor 4 caught fire in 1986 it contained 200 tons of uranium. Over the next ten days an unreported amount of it burned. Some of the resulting uranium oxide dust rained out on the Welsh uplands; readers may remember the consequent restrictions on sales of sheep.

Some of the fallout from both episodes will have been washed into the Severn. Unknown numbers of the dust particles are now in the mud but when CEFAS (a Westminster-run laboratory) tested the mud before the first dump in 2018 they failed to use relatively simple methods that could have detected them. 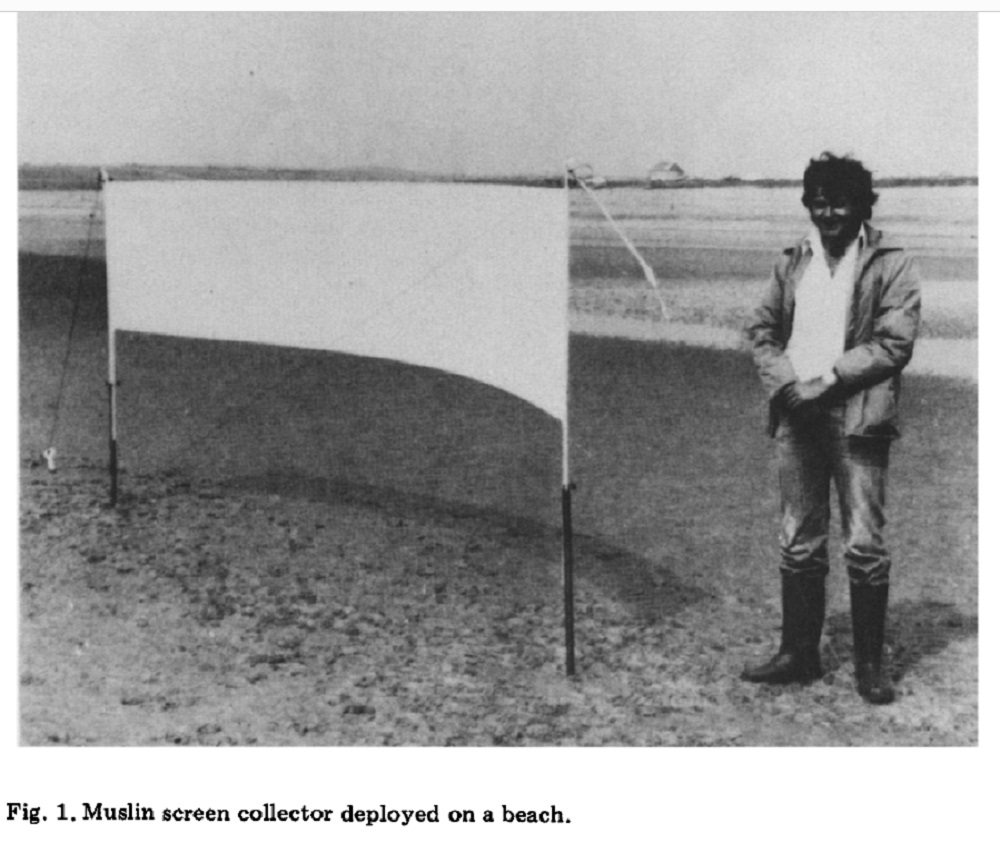 Here’s a picture from 1984, when there was a lot of official interest in radioactivity in marine sediment being blown onshore and causing disease.

Researchers from the Atomic Energy Research Establishment at Harwell put up muslin screens like this in Cumbria. They found the dust as far inland as they went, which was several miles. The reference and other research are in a report commissioned by the charity Children with Cancer UK. 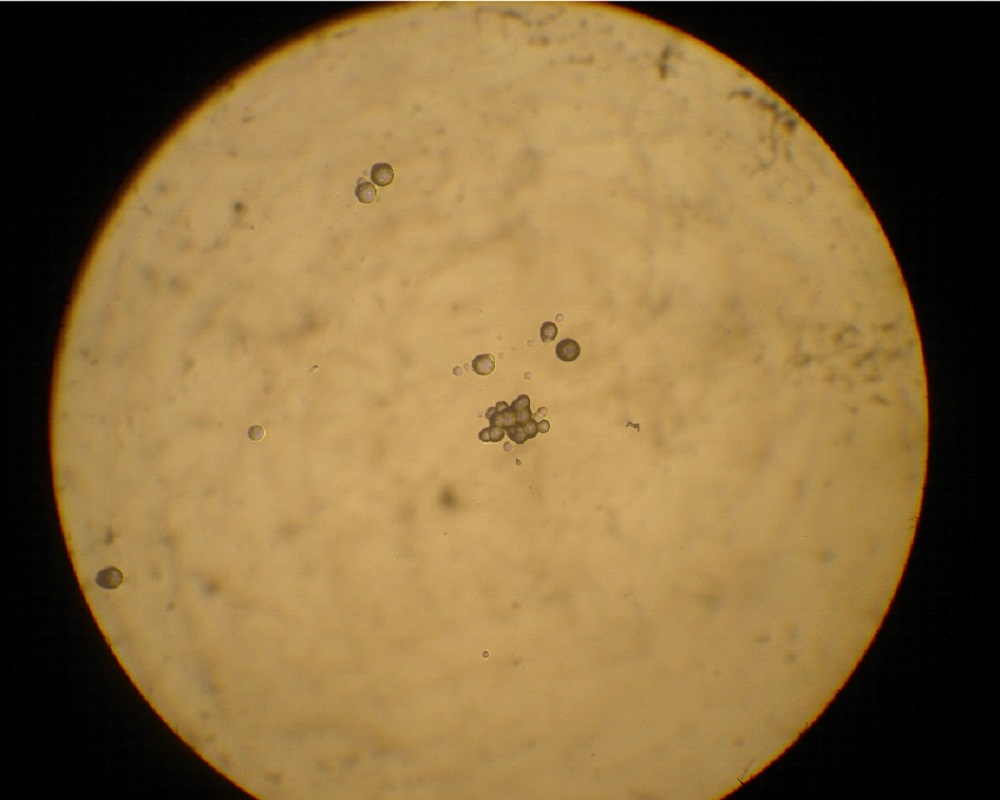 There are no similar data for dust blowing inland in south Wales. But the image above, from 2019, reveals a radioactive dust particle found in a car engine air filter from the English side of the estuary. The vehicle had been driven exclusively within a few miles of Hinkley Point.

The image is made on CR39 plastic, which is used officially as a cheap way of detecting radon in buildings. Radon, uranium and plutonium all emit the same type of radiation, but radon is a gas and doesn’t occur as particles. The Low Level Radiation Campaign made this image by opening the car filter and smearing a random sample of the dust onto a piece of CR39 the size of a microscope slide.

Later the plastic was developed with a caustic solution, then scanned and photographed under a microscope. Each of the small round marks shows the damage one alpha radiation track has done to the plastic. The dust particle itself was washed away during image processing. 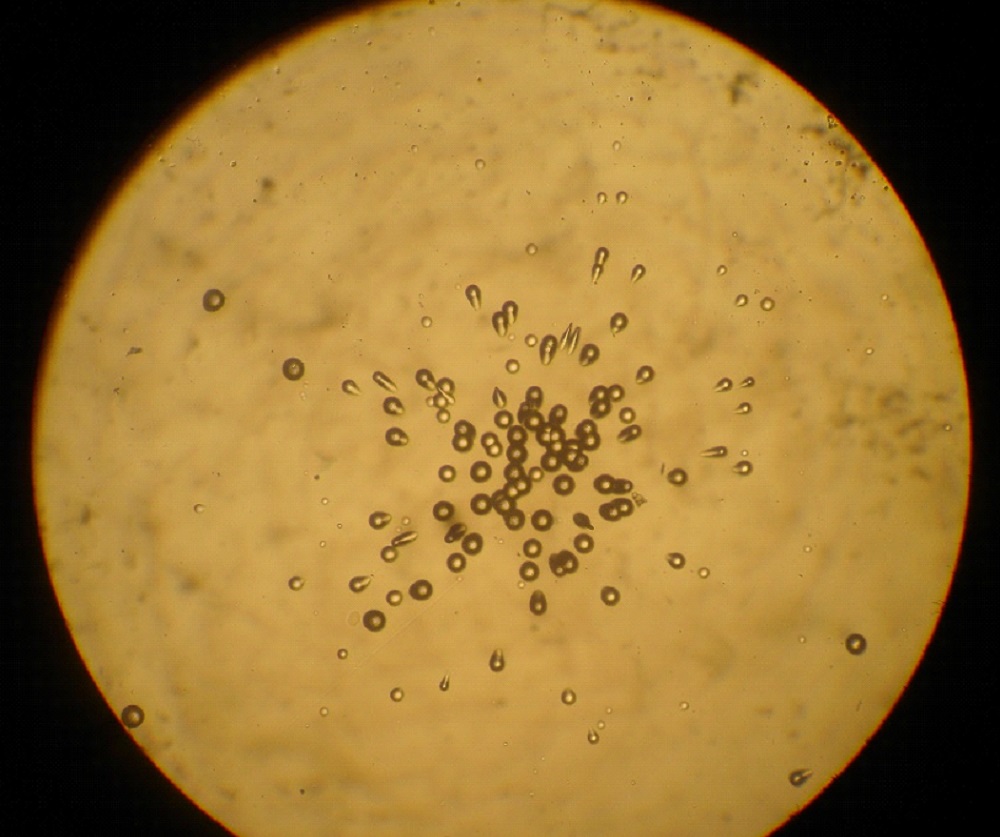 Here’s the imprint of a bigger dust fragment from the same filter. The shape of the cluster shows it’s bar-shaped and about 5 microns (5 millionths of a metre) long. Both these particles are small enough to become airborne in a gentle breeze and inhaled. There were seven such particles on a single slide.

The type of radiation we are discussing here is “ionising”, meaning that it has the ability to change the structure of (or “ionise”) atoms. Since we are concerned with the biological effects of low levels of radiation, we have to consider individual cells.

Where a single radiation track hits a cell there are four possible outcomes: it may kill that cell; or it may do no damage; or it may do some sublethal damage and the cell may repair itself successfully. In those three cases the radiation does not cause a genetic mutation, but if the cell misrepairs it may then pass on that bad repair to its progeny.

Where the radiation tracks or rays are well spaced out the genetic risks are reasonably well understood. But the rays given off by uranium and plutonium are a type called “alpha”, which is so massively energetic that even a single alpha interacts intensely with everything in its path, like a cannonball crashing into a china cabinet.

Alpha energy is deposited so densely along its path that, if the alpha-emitting substance is outside the body, it is all absorbed by a few centimetres of air or by a sheet of paper or the layer of dead cells on our skin. It’s a completely different story where the dust is inhaled because then it is in direct contact with living cells.

In the 1950s official agencies concerned with the health of workers in the US atomic weapons programme knew about the dust and even had a bit of jargon – the Hot Particle Problem or HPP. They observed that when these tiny fragments are inhaled they pack a massive and lasting punch to whatever small colony of cells they lodge in which, commonly with inhalable particles, is lymph nodes.

The problem was that hot particles could induce cancer. Evidence of this has been emerging ever since, with leukaemia and congenital malformation added to the list of diseases.

Paradoxically, regulatory interest in internal alpha emitters has declined as fast as the associated evidence of disease and deformity has increased. We are decades behind the curves for asbestos, smoking, and other types of particulate matter.

Officially, all radiation doses, including the very localised alphas, are regarded as if the energy were averaged across a whole organ or the whole body. This is like police tolerating a gunman in a football stadium because they think that, if he does start shooting, the whole crowd will share the dose of bullets and no-one will notice anything.

Before the 2018 dump, the Low Level Radiation Campaign sent Natural Resources Wales evidence and expressed our concerns. They advised us to refer it to the Department for Business, Energy and Industrial Strategy (BEIS), the Westminster department that sponsors nuclear power. BEIS had already, in 2017, asked COMARE (Westminster’s advisory Committee On Medical Aspects of Radiation In the Environment) to address the same arguments but COMARE avoided the topic, as we had already told NRW.

Nonetheless, through 2019 the NGOs in a regular Forum pursued the topic with BEIS until we reached an impasse when BEIS eventually said investigating the science would undermine COMARE. The question for Wales now seems to be whether such scruples trump the “uncertainty” requirements of our own environmental legislation.

EDF and NRW have recognised that uranium dust is present but the tests they propose for the next dump are the same as the last, so the dust will remain invisible.

EDF propose to use spectrometry, which only detects individual atoms and cannot detect dust particles. This is like Amity Island’s police chief using a microscope to look for the notorious great white shark. A microscope can’t see anything as big as a shark. It may see skin cells or cells from some other type of tissue, but it can’t tell whether they came from a shark.

Likewise, the spectrograph can detect atoms of uranium or plutonium but it can’t tell whether those atoms came from dust particles. So, as CEFAS and EDF know, spectrometry is an averaging dodge. (Incidentally, we picked the Jaws reference because the difference in size between a skin cell and a great white shark is very roughly the same as the difference between a uranium atom and a one-micron particle.

Richard Bramhall has been Secretary of the Llandrindod Wells-based Low Level Radiation Campaign (LLRC) since 1996. Between 1997- 2000 LLRC campaigned successfully for the UK not to adopt new EU standards that would have allowed the nuclear industry to increase levels of radioactive contamination in materials that could be sold for unregulated reuse and recycling. Bramhall was subsequently appointed to the Westminster Government scientific advisory committee CERRIE (Committee Examining Radiation Risks of Internal Emitters 2001-04) and has participated in many stakeholder dialogues.