Age is just a number: Wales go for glory at the Over 70s World Cup

‘Football is fantastic – and knows no age.’ That’s the evergreen slogan of the 4th International World Cup 70+, played this week in Roskilde, Denmark and this year, for the first time, Wales was represented.

Wales’ team manager John “Bomber” Ross thought it was a wonderful experience managing the “Over 70s” in their first World Cup tournament. He said: “All the players are both a credit to their country and to the families. They are testament to the fact that age has no boundaries and is just a number.”

The goal of the tournament is for so-called “oldboys” players “to experience joy, passion, health and friendship across all borders – giving, a never to be forgotten, football experience.”

It might not have been a red invasion but twenty-eight Welsh players over 70 years of age, along with a handful of supporters travelled to Denmark to play in competitions for those aged 70+ and 75+, taking on teams from Denmark, England, USA, Canada, Germany and New Zealand.

To mark the occasion, one of the players, David Mayer of Newport even went as far as to create his own currency, producing a version of the Danish kroner which looks suspiciously like a Danish lager voucher.

It is not as yet recognised as legal tender, nor traded on any money markets! Mayer, aged 74, was one of the oldest players representing Wales, having been born in 1948 while Keith Hughes, born in 1944 – and thus a sprightly 78 years of age – managed to make some of his team-mates seem like youngsters. 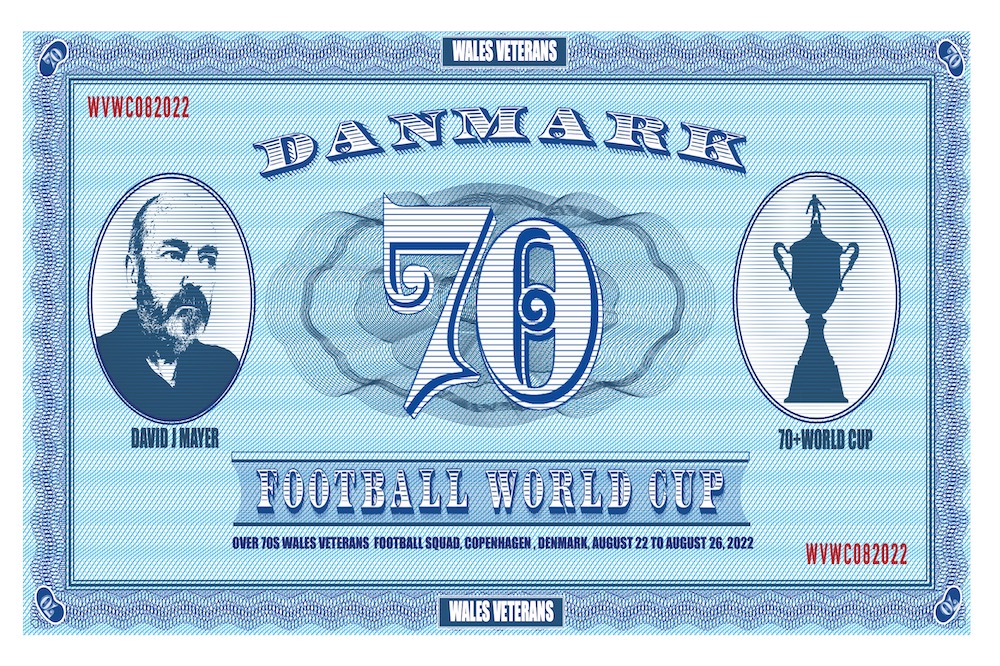 Their individual stamina was further tested by the fact that many players played two games each on both the Wednesday morning and afternoon, with a further 2 games each on the Thursday morning.

There was an American flavour to the opening rounds. Wales over 70s lost their first match 1-0 against CT United from the USA but drew 1-1 in their second game against NC United East, from the eastern United States. Their third game saw them walking off the pitch as victors, having beaten hosts Frem, Copenhagen FC 2-0, with Mike Williams proudly wearing the captain’s armband for the occasion.

The goalkeeper for the over 70s squad, Tom Collinson had been celebrating even before the game started, as he had just got married, so brought his wife Janet out to Copenhagen to share in the excitement.

The team then went on to meet Germany in the quarters but conceded a goal in the first 5 minutes and the score stubbornly remained 1-0 to Germany up the final whistle even though Wales had 90% of the possession throughout the game.

Meanwhile, after a shaky start to the competition, the over 75s – who normally play walking football – found their mojo and managed to reach the semi-finals, when they were knocked out in the 5-a-side by 4 goals to 1. Hedley Austin, manager of the 75s said: ‘The team gelled as we got used to the 5-a-side game and they ended up two wins short of claiming the cup.’

The over 70s, meanwhile, managed a storming win over the West Coast of the USA in the play-offs, managing to slot in half a dozen goals, while their opponents failed to score a single one. This meant the team ended up a very creditable fifth in the tournament while the over 75s claimed a bronze medal for their endeavours. 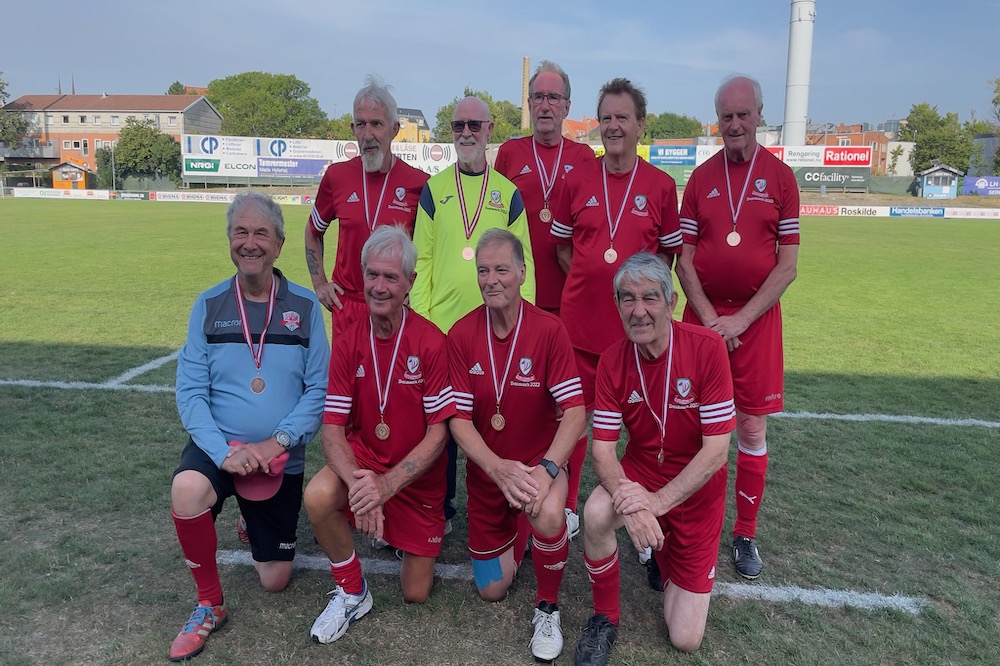 The final of the cup tournament saw the USA, playing in blue beat hosts Denmark sporting claret coloured kit. Crowd control was apparently not a problem. 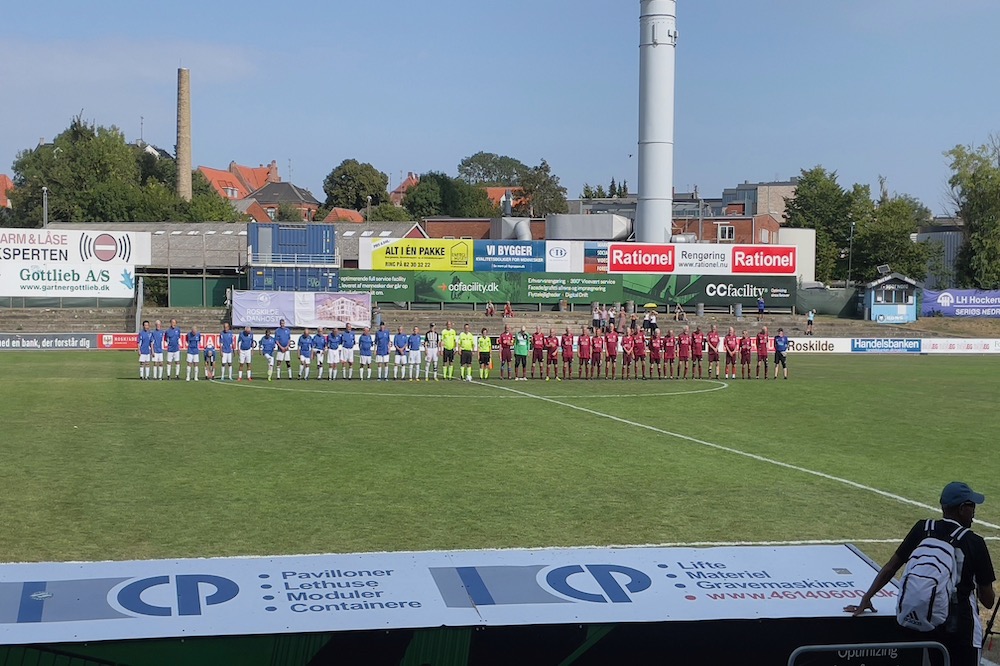 Team captain and main organiser Handley Brustad of Newport said: “Every game was keenly contested but there was a real emphasis on sportsmanship. The organisation and hospitality of the Danish people were first class.”

The Welsh flag thus flew proudly for three days over Roskilde, a city some 20 miles west of Copenhagen. 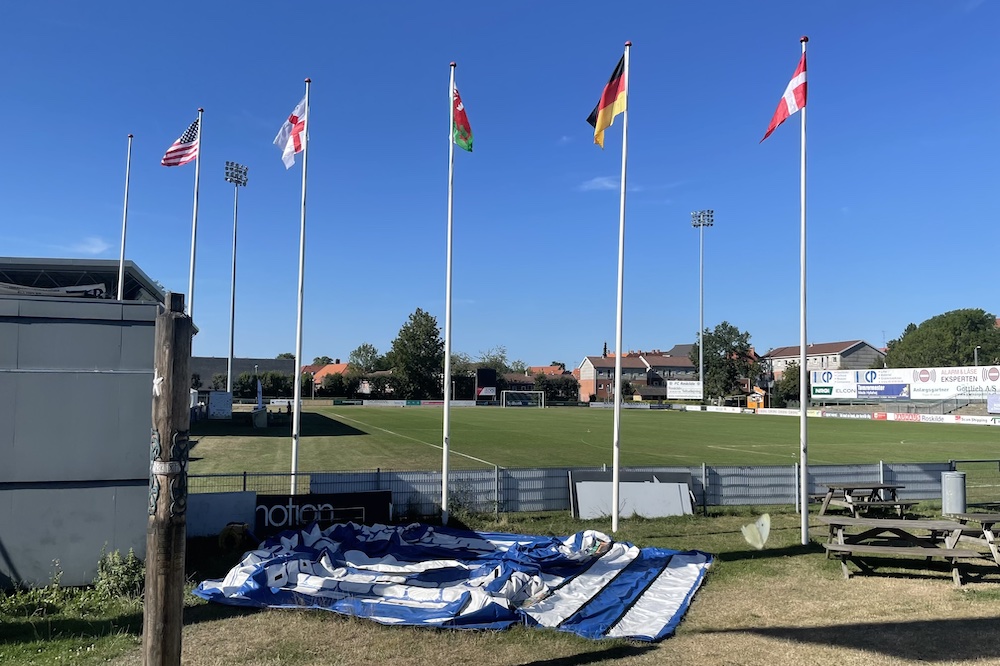 But rumours that the English FA paid for the team kit and for accommodation in a first rate hotel did not compare favourably with the fact that the Welsh team stayed in a student hostel, while team members had to pay for their own playing kit and travel costs.

Organisers now hope that the Welsh FA and Welsh Government might consider giving greater help, especially now that senior, or what might be described as very senior football seems to be on a roll.