Barry Hughes: Maverick, manager and musician – in that order

Picture this. A guy called Barry Hughes moves to the Netherlands in the late 1960’s with his Dutch girlfriend.

He becomes fluent in the language, embarks on a successful career as a football manager, and along the way, rebrands a Dutch football club, discovers Ruud Gullit, becomes a TV personality and hits the charts with a levenslied (Dutch Schlagger) pop song about his bald head.

For this was no ordinary Barry Hughes. He was a maverick, a visionary… and more importantly, a north Walian. Despite remaining to this day a much loved and celebrated character in the Netherlands, he is an unknown figure in his homeland of Wales. It is high time that he is celebrated.

Born in Caernarfon and raised in his hometown of Rhyl, Barry Hughes’ first foray into the footballing world was at Glyndwr Secondary Modern school at the age of 14, when he represented Flintshire Schoolboys on the hallowed turf of Wembley.

By the age of 16, he had moved to the Black Country and began a professional career with West Bromwich Albion before moving to the Netherlands with his girlfriend and future wife, Elles Berger, a Dutch TV personality.

He continued his playing career with Blauw-Wit and made an impact at Alkmaar ‘54 where he became their team captain.

However, his career sadly came to a sudden halt due to an injury and he decided to pursue a managerial career, initially coaching Alkmaar ‘54 before going on to manage VV Harlingen, HFC Haarlem and the peculiarly named Go Ahead football club in Deventer, where he made his first permanent dent in Dutch football.

The club was originally known as ‘Be Quick’ but was forced to change its eccentric name by the Dutch FA. On 1 July 1970, Barry – the best thing to come out of Rhyl since Kwik Save – arrived as their new manager and wasted no time in making bold changes.

He felt strongly that the club needed a rebrand and suggested that they add ‘Eagles’ to Go Ahead, partly because the bird appeared on the city’s coat of arms (Deventer), but also as a fitting personal tribute to his own bald head. The club agreed.

Barry Hughes remains a revered and loved figure at Go Ahead Eagles and will forever be synonymous with the slightly surreal club name.

I, along with a group of friends, travelled on a homage trip in honour of Hughes soon after he died in 2019.

The atmosphere at the Go Ahead Eagles stadium was incredible. It was very old-school, like a mini Highbury, located right in the middle of an old Deventer suburb.

However, we hadn’t realised we were watching the match amongst the ‘ultras’, and things got a little tense after a while.

A fight broke out in front of us, and then just as they were about to give in to their curiosity with us lot, our chief mediator (Robi Iago) explained to them that we were from Wales and had made the trip in honour of Barry Hughes. We were immediately hugged and welcomed as if we’d liberated the place. They worshiped Barry Hughes, the man who baptised them and led them to success, like some Dadaist version of Bill Shankly, the Man Ray of Dutch football.

He is also credited as the guy who discovered Ruud Gullit – giving him his first professional contract and an opportunity to play in the Eredivisie at the tender age of 16. Gullit himself acknowledges his contribution in his autobiography and also praised him for normalising and opening the door to players from other backgrounds (specifically, the Surinamese community which had long established itself in the Netherlands as a result of colonisation).

It’s incredible to think that Barry Hughes helped to trigger a conveyer belt of truly remarkable Dutch players – from Gullit to Edgar Davids, Rijkaard, Seedorf, Kluivert and more recently, Virgil Van Dijk and Michel Vorm (all of Surinamese heritage). When Barry Hughes died in 2019 at the age of 81, Ruud Gullit posted a tribute on Instagram:   “RIP #barryhughes Thanks Barry for giving me a opportunity to become a professional football player. For believing in me and being a mentor for me. I will never forget you and you will be always in my heart. #rustzacht”. 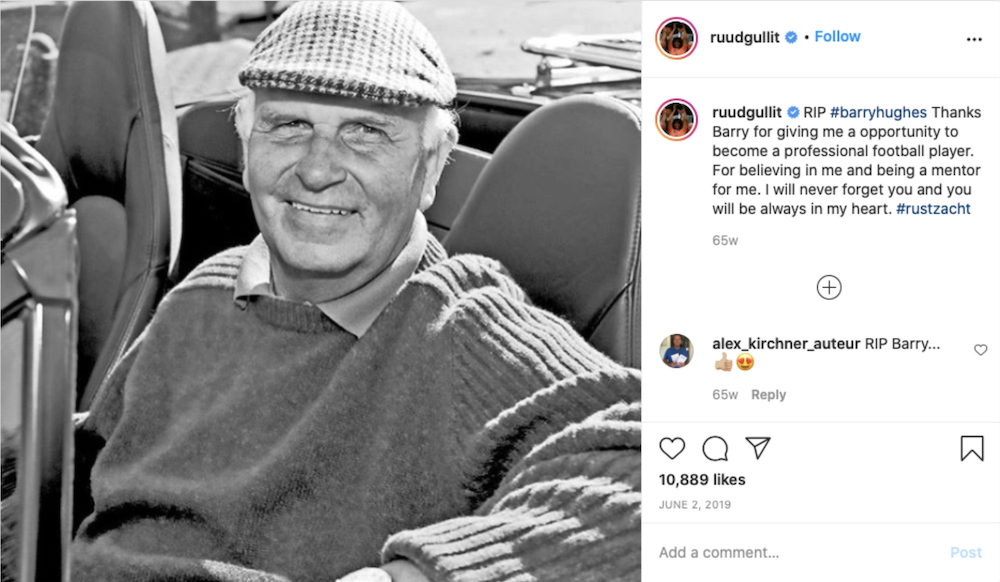 Barry Hughes never took himself too seriously and obviously enjoyed the ridiculousness of life. He poked fun at himself and others around him and battled against the norm at every opportunity. He once got revenge on his old coach and rival manager by blowing a raspberry at him from the dugout, much to the delight of the home fans – a surreal act of public humiliation.

He also developed a music career. (Yes, you read that correctly).   His novelty music career began at the end of the ’70s when he released the “Voetbal is Koning” (Football is King) record.

A few years later, he released a breakthrough hit about his bald head (“Ik wil op mijn kop een kamerbreed tapijt”), a celebratory song about baldness which loosely translates from Dutch to something along the lines of ‘I want a piece of carpet on my head!’ It reached no. 7 in the Dutch charts and remained in the Top 10 for eight weeks.

Here he is performing the song (and blowing a raspberry) under a chandelier on Dutch TV :

Another follow up hit was released (which I proudly own on vinyl). This time, a duet with a bearded Dutch musician called Vader Abraham, who went on to write the first Smurfs record and a Eurovision entry for the Netherlands.

When Barry Hughes died in Amsterdam in 2019, Fox Sport broadcasted a documentary about his life and Go Ahead Eagles shared their grief at the passing of their Welsh eagle.

His biggest feat, perhaps, was somehow achieving it all without anyone back home even noticing. It is high time that he is celebrated here in Wales and remembered for his important contribution to Dutch football.

As Welsh fans sail into the port of Rotterdam today, let’s take a moment to remember Barry Hughes – one of our most wonderful, colourful and eccentric footballing exports.