With reports that the Welsh superstar could be on the way to his hometown club, any information on a potential Bale transfer has been hungrily devoured by Bluebirds’ supporters.

So when a car was spotted parked outside the Cardiff City Stadium with the registration plate GB 11 GAR, fans couldn’t help but speculate that the soon-to-be former Real Madrid player had popped back home for talks with the capital city club.

One hopeful Twitter user posted the photo of the car with the words: ‘I BEG this is actually Gareth Bale’s car at CCS???’

Another user posted a video he had received from a mate who had driven to the stadium to take a look.

A mate of mine got sent this… 🤞 pic.twitter.com/EaH8IW3yz2

One fan even waited to see who was driving the car – and was disappointed to discover it wasn’t the Welsh legend.

The mystery was finally solved when the owner of the car – Gareth Bloodworth apologised to Cardiff City fans for momentarily getting their hopes up. 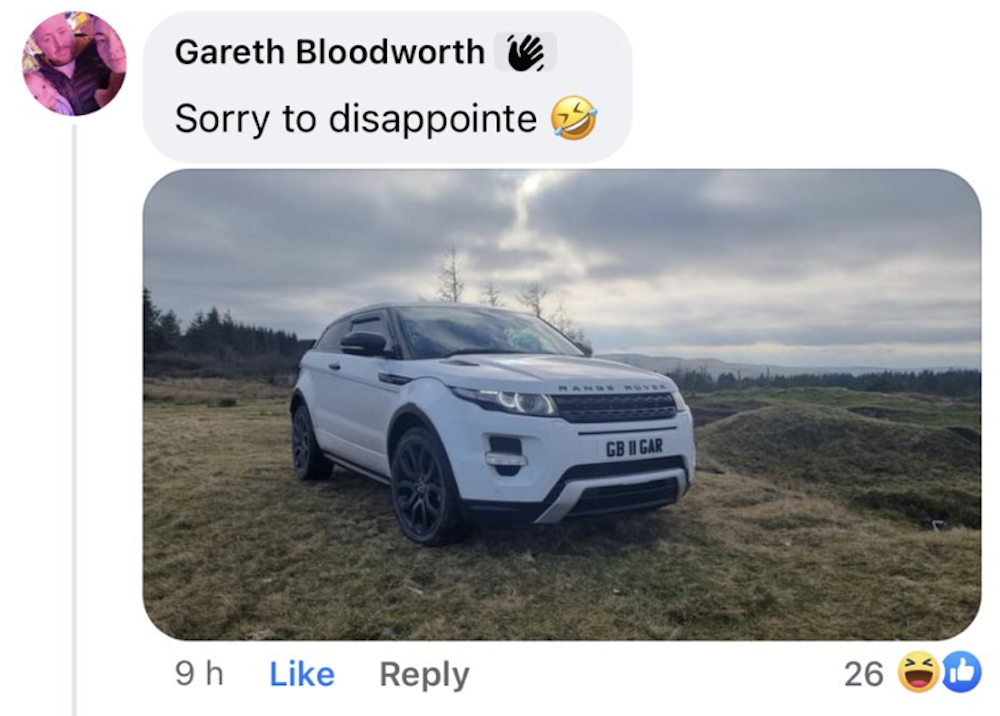 Despite this motoring mix-up, the Gareth Bale to join Cardiff City rumours persist.

Wales boss Robert Page last week said a move to the Bluebirds “makes sense” and “ticks all the boxes”.

Bale’s nine-year stay at Real Madrid will come to an end after the Spanish club’s Champions League final date with Liverpool on May 28.

Speculation persists that the 32-year-old may retire should Wales fail to win their World Cup play-off final against Scotland or Ukraine on June 5.

But Bale is likely to find a new club should Wales qualify for the World Cup in Qatar and, as incredible as it sounds, Cardiff – who finished 18th in the Sky Bet Championship this season – would appear to be in the running for his signature.

Bale’s agent Jonathan Barnett hinted as much this week by telling WalesOnline that the decision would be down to “a personal choice and not about money”.

Addressing Cardiff rumours that refuse to go away, Page – a former Bluebirds player himself – said of a possible homecoming: “It ticks all the boxes. Ultimately, it’s Gareth’s decision and Cardiff City’s.

“And I think he’s right to say ‘Let’s throw full focus on to the fifth’. Let’s get there first and have that discussion.

“We can carry on talking about it and guess, have our opinion, and it does make sense. It makes a lot of sense. He can base himself at a training ground he’s familiar with.

“Ultimately, let’s see what happens on the fifth and I’ll probably be the first one after the game to ask the question

“I wouldn’t want him to retire. The door is always open, for what he does in the changing room as well.

“I’d want him to carry on as long as he possibly can because it’s the influence he has in that changing room as well.”

Bale has played little more than 20 minutes for Real since scoring twice in Wales’ 2-1 World Cup play-off semi-final victory over Austria on March 24.

He has been troubled by a back problem that Real manager Carlo Ancelotti said had left him unable to move, and was absent from the club’s last five matchday squads.

But, on Thursday, Bale was named in a 27-man squad for Wales’ busy June itinerary, which also includes four Nations League games, and by Ancelotti for Real’s final LaLiga game of the season at home to Real Betis.

Wales’ opening Nations League game is away to Poland on June 1, although Bale is unlikely to be risked for that pre-World Cup play-off fixture in Wroclaw.

“We will keep in touch with him,” Page said over suggestions that Bale might not be involved in Real’s Champions League final squad.

“It’s common sense that if he is not going to feature at all, and Real Madrid are happy with releasing him, then of course we would like him on camp.

“They don’t have to. We don’t have the players (officially) until the 30th, so we can’t pull rank on that.

“We just have to go with what they suggest. Rightly so because he’s employed by the club, but if there’s an opportunity to get players in earlier then we would like that.”