Sons of Cambria – the curious tales of Wales’ forgotten footballers

Welsh international football has come a long way since it was first played in the late 1800s.

The road has been long and invariably bumpy, littered with highs and lows, but as we enter a new golden era of Welsh football, the future is bright for a game that is more popular now than it has ever been.

To discover the roots of football in Wales you have to travel back almost 150 years, to 1876.

The FAW was founded at a meeting held on 2 February 1876 at the Wynnstay Arms Hotel in Wrexham, initially to formalise the arrangements for Wales’ first ever competitive international match – against Scotland.

Then, the man known as ‘the father of Welsh football’ Llewelyn Kenrick, a Welsh solicitor became the chief architect of the Football Association of Wales.

Since that first international against Scotland, more than 700 footballers have proudly represented the Wales senior men’s side – the world’s third oldest international team.

Those earliest players to have pulled on the red of Wales have been immortalised in the newly published first volume of an ambitious three-part collection entitled Sons of Cambria, the story of every single player to have played for Wales.

Volume I of Sons of Cambria, covers the 374 players capped between the Football Association of Wales’ inaugural match against Scotland in Glasgow on 25 March 1876, to the final game before the Second World War against France in Paris on 20 May 1939. It also includes the war-time non-capped matches and the players from those games. 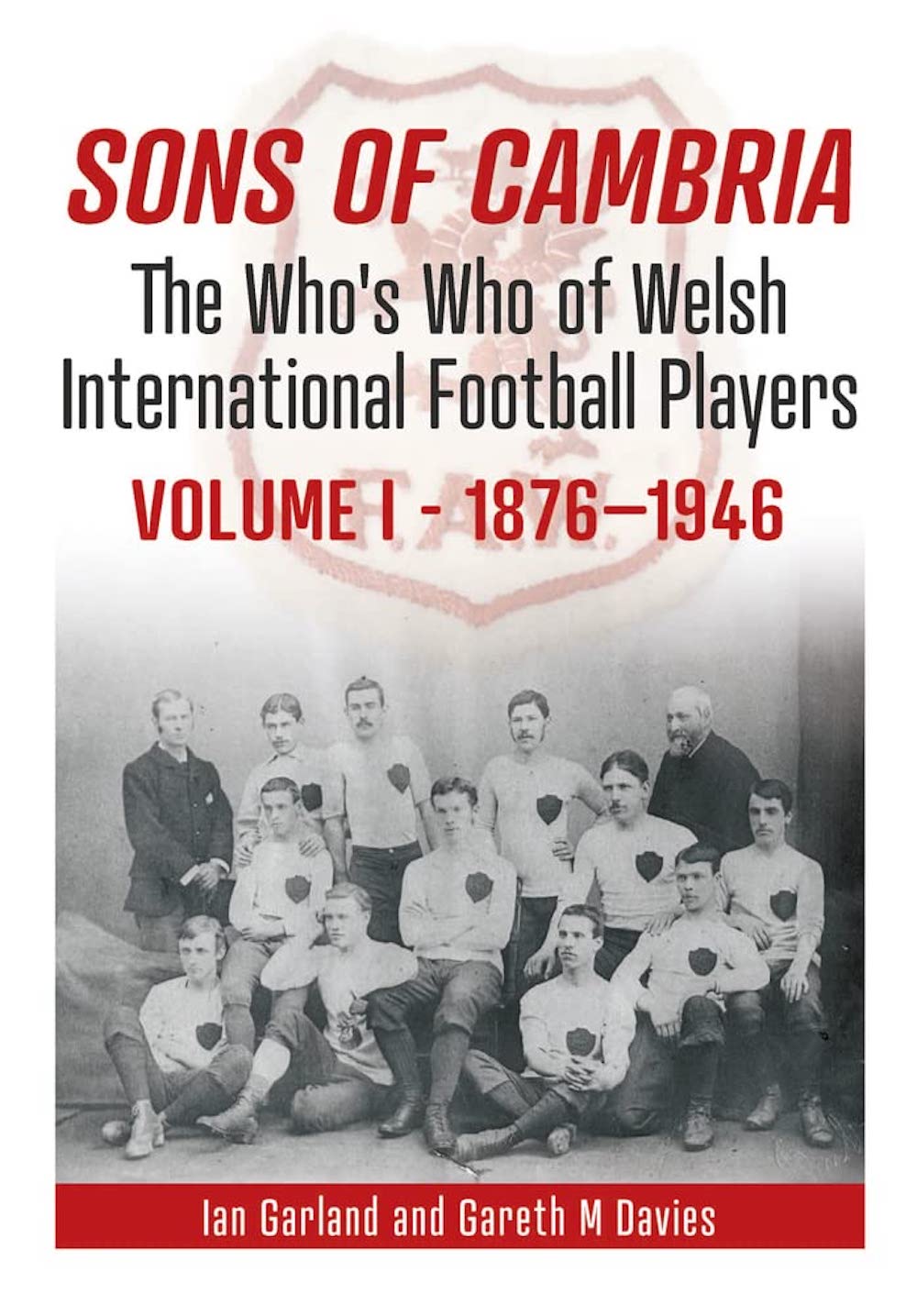 Speaking about his book, co-author Ian Garland (from Dyffryn Ceiriog, near Wrexham) said:

“For the very first time every Wales international player is listed in the order in which they won their first cap which provides a fascinating chronological history of the national team. We have also included details of the localities which produced the most players, with Wrexham, north east Wales and Shropshire dominating the first decades of Welsh football.”

“We have also tracked down photos of almost all the 374 players, and every known team photo from 1876 to 1939 which helps to bring the story of Welsh football to life, as does the listing of the clubs that provided the most players to the national team, such as Wrexham, Druids, Oswestry Town and Chirk.”

“We believe Sons of Cambria is the most comprehensive Who’s Who of any international football team,” said Ian, “and is a book Wales football fans will treasure.”

“We look forward to publishing Volume II in the autumn of 2022 and Volume III, which will bring us fully up-to-date, in 2023.”

Sons of Cambria has been welcomed by prominent football historian Prof Martin Johnes who commented: “A brilliant piece of research. Essential reading for anyone interested in the history of Welsh football.” And also by popular football author Phil Stead who added: “Indispensable. The primary source of information for anybody with an interest in Welsh football.” 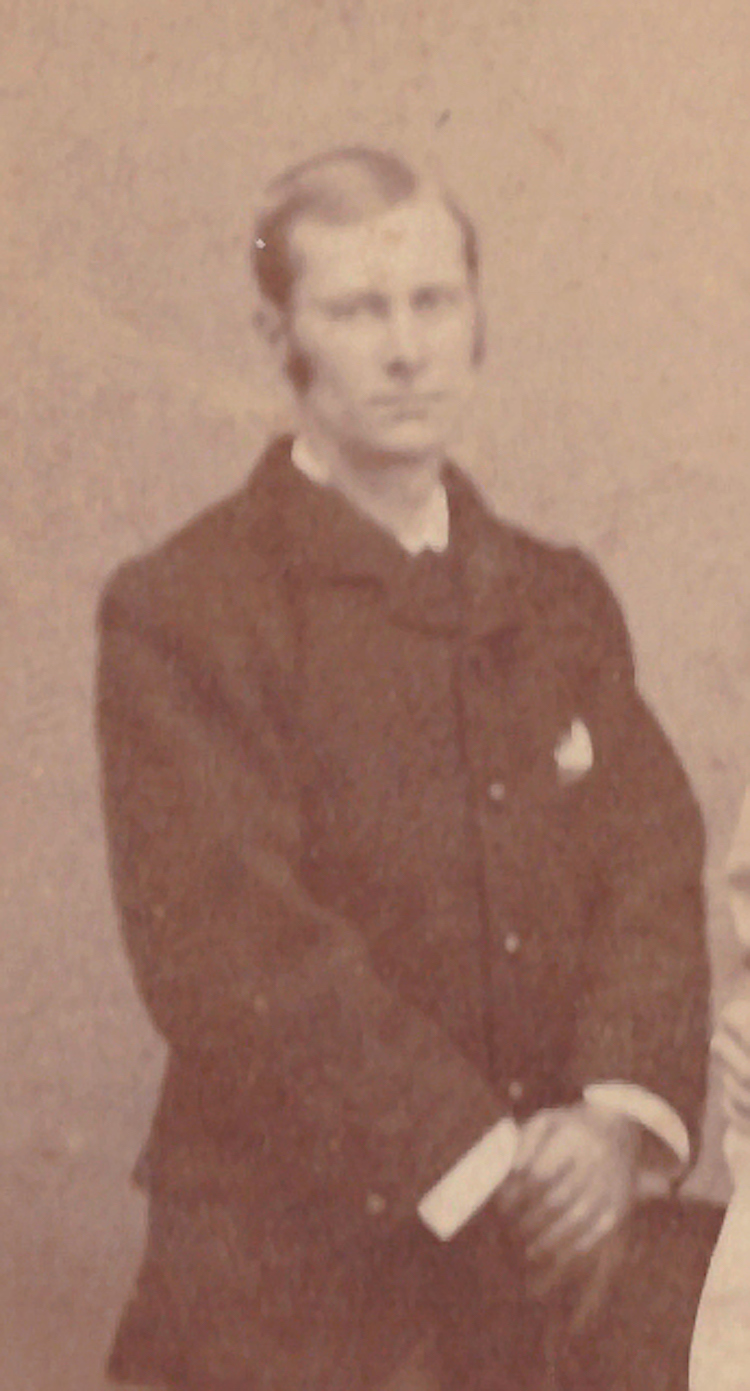 Founder of the FAW, Kenrick was a tall muscular player and a full back with a reputation as a fearsome shoulder charger.

He made his final appearance for Wales in unexpected circumstances taking the field in Wales’ first victory against England at Blackburn in 1881 – wearing tweed trousers and ordinary boots. His last minute appearance came about when his teammate Jack Powell missed his train connection at Chester and Kensrick turned out in his everyday clothes to give a splendid performance despite carrying a knee injury.

‘We arrived at Blackburn a man short and took the field with only ten men. To the best of my recollection the ground was nearly 200 yards long and 100 yards wide. The spectators stood on foot planks along the touch lines. It was snowing and hailing and we had been playing for some time, when I saw what I thought was a spectator breaking into the field and making a violent attack upon Marshall and Rostrom, the English right wing. Upon closer inspection I found it was Llewellyn Kenrick of Ruabon. He was dressed in long tweed trousers, wore ordinary boots and sported a smart Oxford shirt. He played with the utmost vigour until unfortunately his knee gave way and once more Wales had only ten men on the field.’ 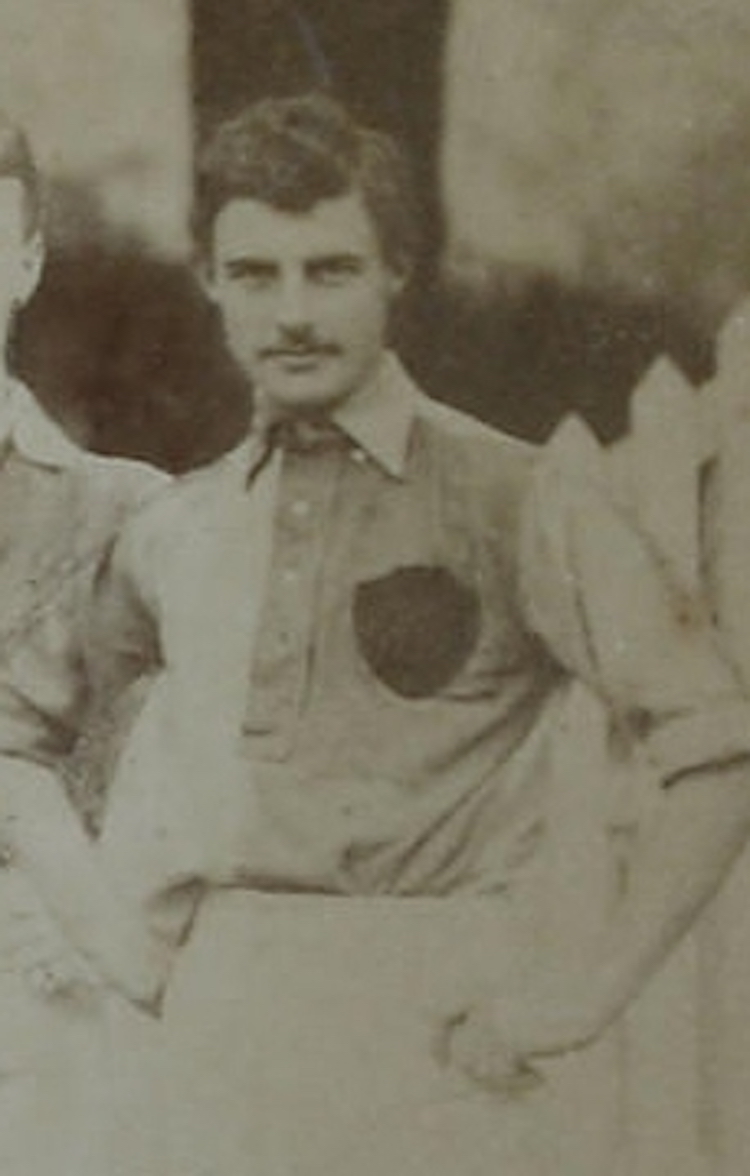 The Llanrhaiadr-born footballer was an imposing centre half who won two caps for Wales.

However, the Oswestry Town player holds what is probably a unique place among Wales international players in that, in July 1895, he was sued for ‘breach of promise’ of marriage. The lady in question was named Letitia Allmand, who was described in press reports as being of ‘prepossessing appearance’.
It appears that Foulkes first became engaged to Miss Allmand in 1886 when she was 18.

Subsequently, Foulkes decided to go to Australia to improve his prospects. The jury found for Miss Allmand and assessed the damages at the then huge sum of £250. The couple did eventually marry, but not to each other.

Foulkes died in 1937 in a barber’s chair in Oswestry. 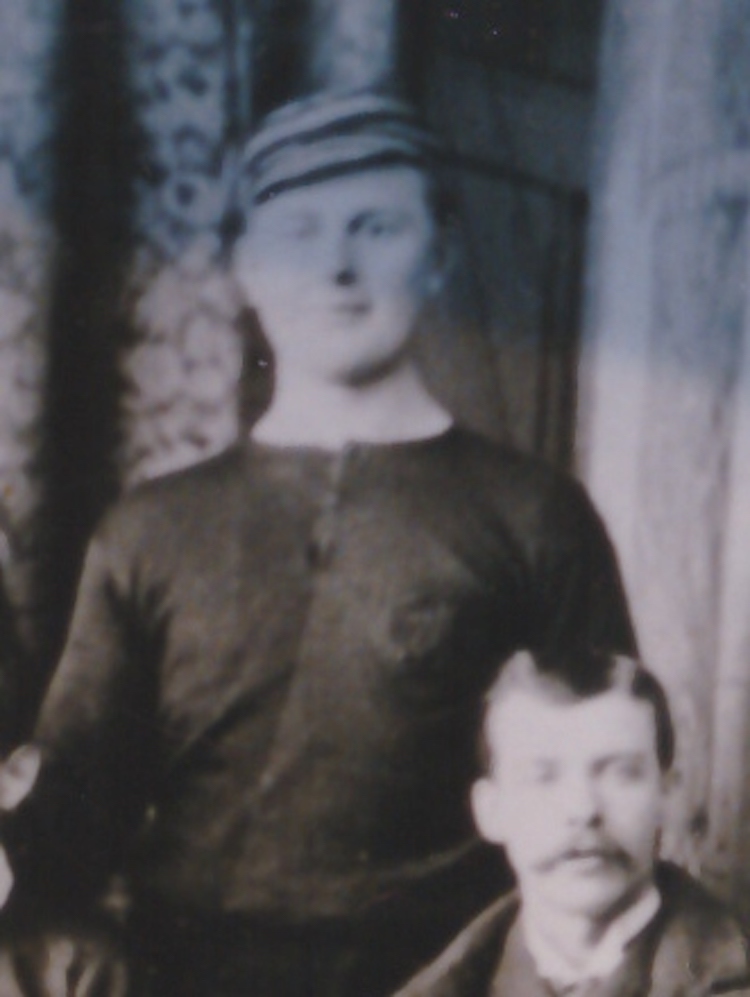 As unexpected events are concerned Alexander Hunter was involved in one of the most surprising – for him at least.

The then FAW Secretary, he travelled to the game against Ireland expecting to act as an umpire, but due to the rough crossing of the Irish Sea with some Wale players unable to take to the field because of the after-effects of the crossing, he found himself being drafted in for a single cap, years after he’d ceased playing for the junior club, Wrexham Hare and Hounds.

Unfortunately, he didn’t exactly cover himself in glory, as one newspaper duly noted – ‘Mr Hunter, the secretary of the Welsh Association filled up the gap in the Welsh team by playing half back, but it was needless to say it was neither strengthened nor stabilised by his presence.’ 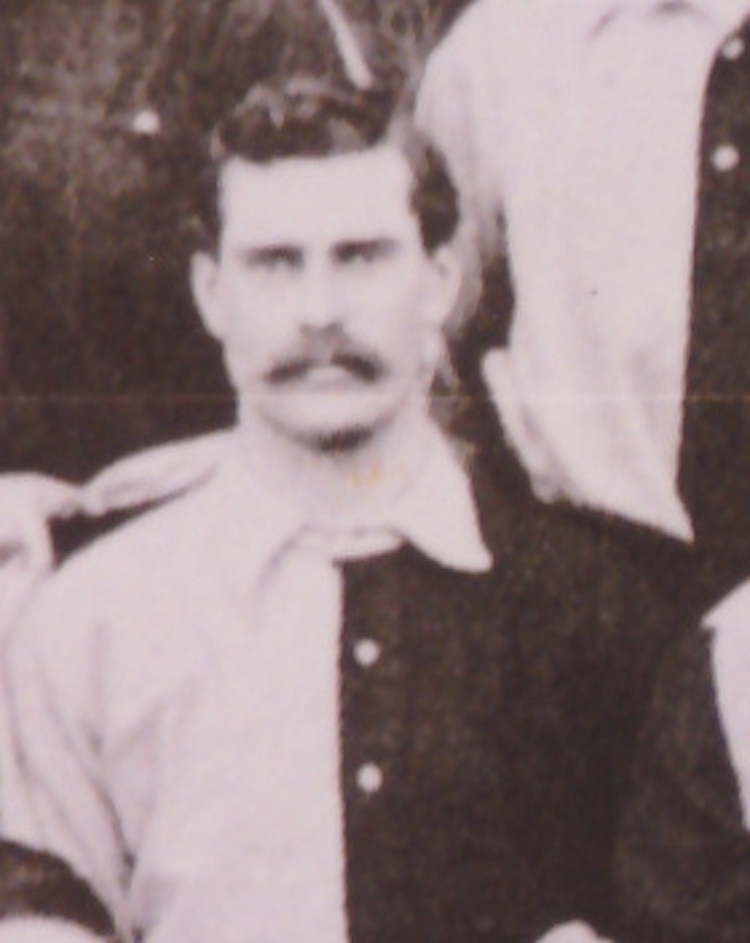 The Wrexham-born goalkeeper won 20 caps for Wales between 1887 and 1899, playing his club football with Wrexham, Preston North End and Bolton Wanderers.

Trainer had left Wrexham under a cloud, following a particularly rough FA Cup tie between Wrexham and Oswestry in December 1883. He was alleged to have ‘insulted the referee’ and the English FA banned Wrexham from the competition and reported Trainer’s offence to the FAW.

It was probably during Trainer’s time at Preston that he had a remarkable confrontation with a footballing elephant. Sanger’s Circus, owners of this unusual beast, arranged for Trainer to take three penalty kicks against the elephant and then for him to go in goal and face the animal.

‘When Trainer was shooting, he was placed about 12 yards distance and the ball was 2ft 6ins in diameter. It was practically impossible to get this through the goal for the elephant when turned end-on filled the area. When the animal’s turn came, it was brought to within six or seven yards.

Trainer stopped the first shot though the force was nearly enough to break his arm. He also kept out the second but the elephant proved not only a deadly shot but a trickster. For his third effort it walked up to the ball as before and raised its foot to kick, then it put its foot down again as if intending to go back and walk up again.’

Trainer, reportedly wearing his Wales international jersey, had not expected to find the real cunning of a footballer in an elephant, and relaxed his vigilance, but quick as lightning the animal took the kick unexpectedly and the goal was scored. 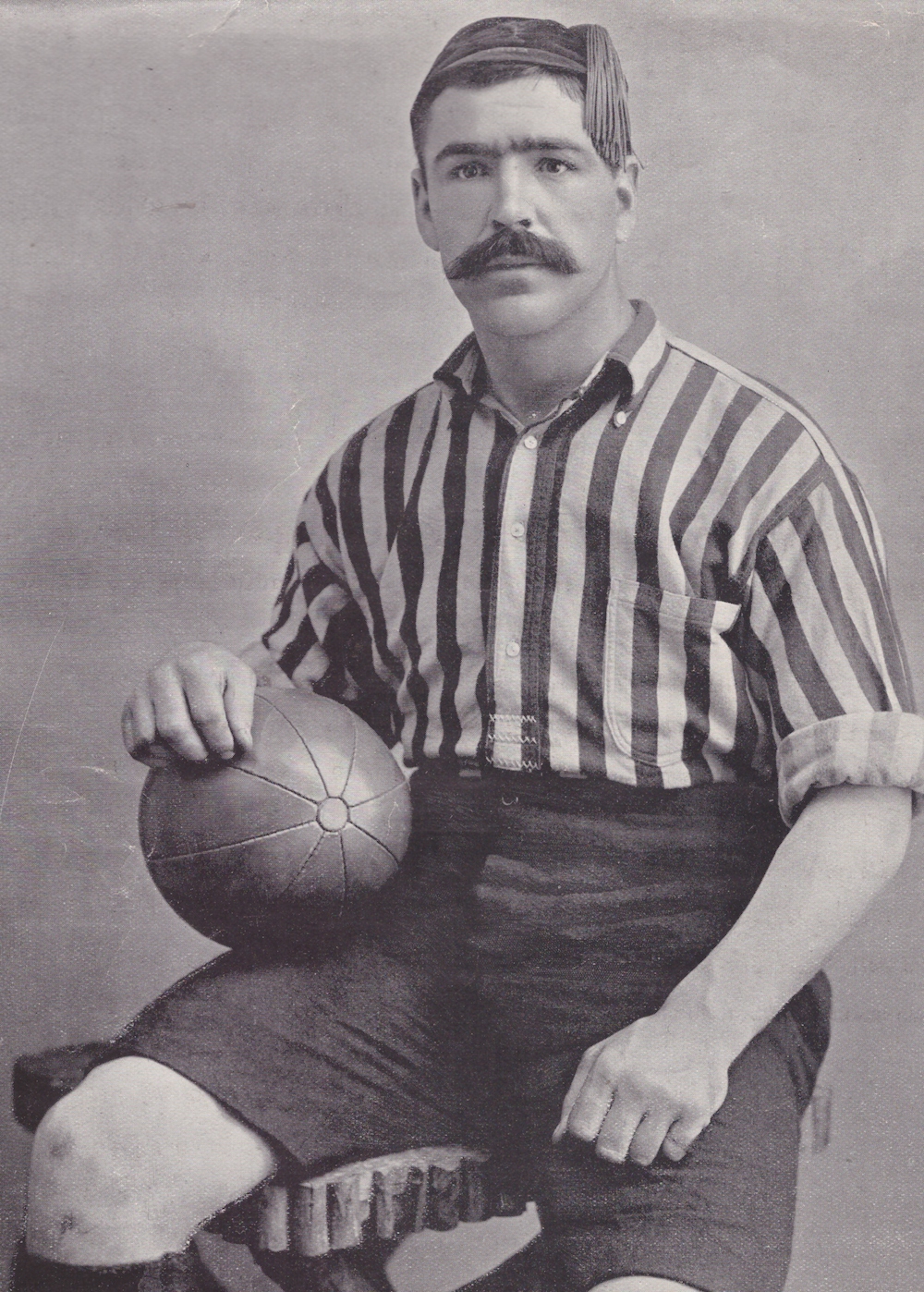 A powerful no-nonsense player, he played for Small Heath, Woolwich Arsenal and Newton Heath (Man Utd) and was sent off three times in a colourful career.

A big, burly fellow, who was known as ‘The Mighty Caesar’ or ‘Jumbo’ to opponents, Jenkyns was aplayer of no little skill and a master of the shoulder charge.. Oen reporter described him as having ‘an atomic shoulder charge’. He was said to have charged one opponent from the centre of the field to the wire ropes surrounding the playing field. How times have changed.

He had a heart as big as his huge frame and he was a great inspiration to teammates, captaining each team he played for.

His strong physique helped him head and kick the ball. He once won a long distance kicking competition by sending a dead ball from one end of the field to the other. However, his physicality also got him into trouble with referees. He was sent off three times and was a player opposition fans loved to hate. 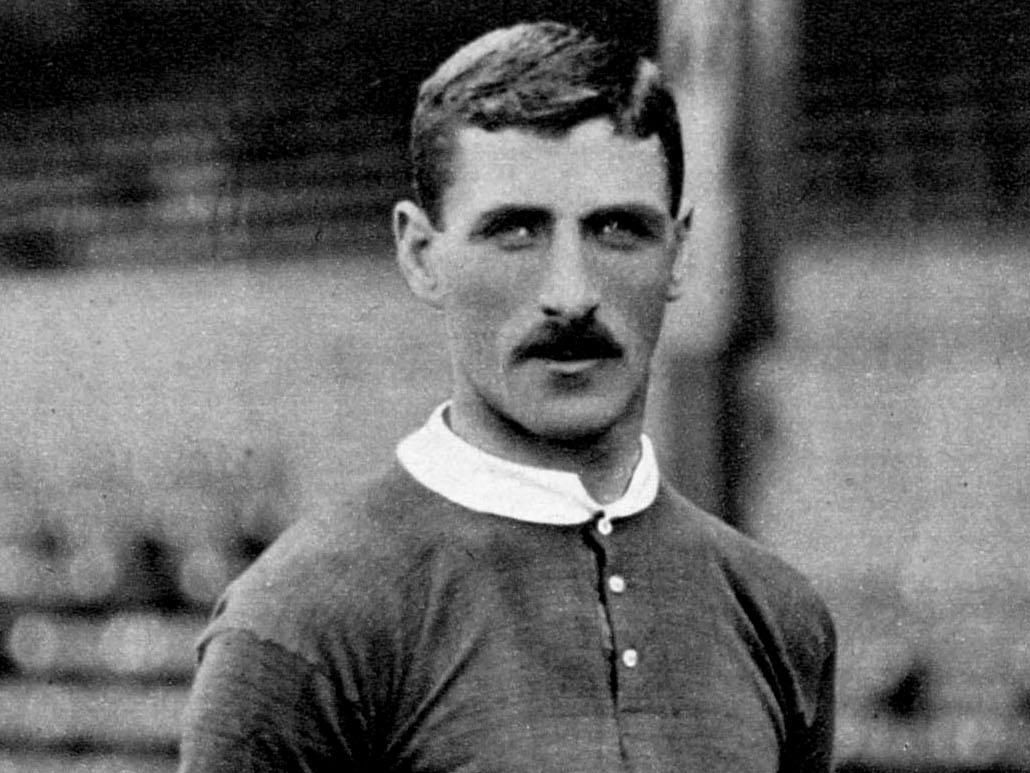 Acknowledged as the first superstar of Welsh football, Meredith, from Chirk, won 46 caps, and scored 11 goals.

He played for both Manchester United and Manchester City in a glittering career that saw him once described as the ‘football wonder of all time’.

Making his Wales debut in 1895 he turned out for the national side for more than 20 years, making his final appearance in 1920.

Meredith was the first man to win winner’s medals in both the welsh Cup and FA Cup, and until the 1990s, held the record as the oldest player to appear in an international match.

He was said to never play without a toothpick in his mouth, and usually prepared before a match with a crust of toast.

In his career which spanned an astonishing 34 years, he played in almost 700 league games, and innumerable other matches – possibly as many as 1,600 in total.

He was simply a footballing phenomenon. 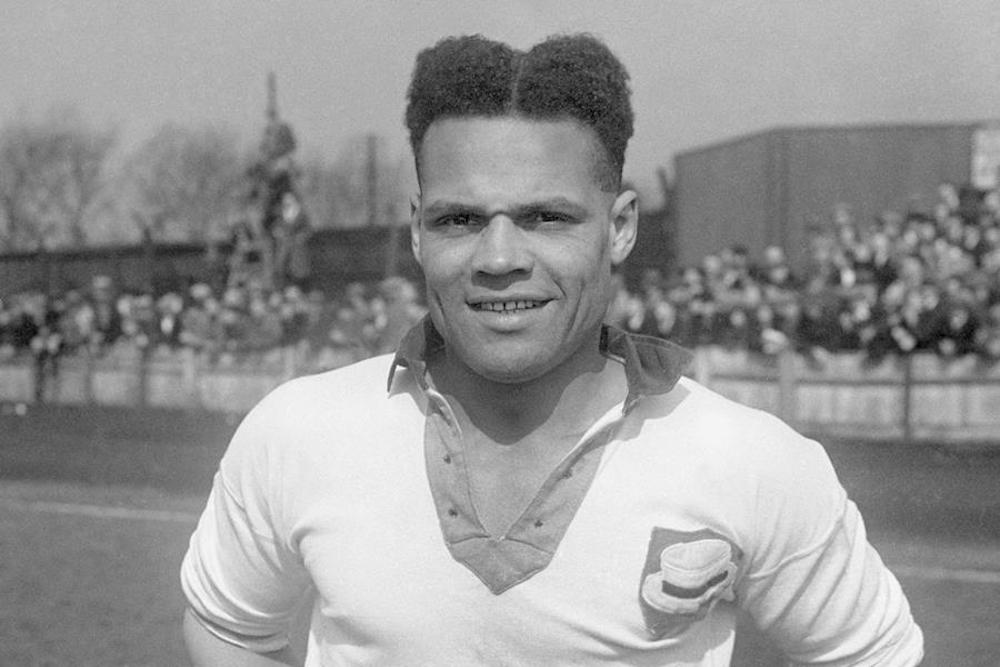 Parris was born in Wales to parents, who according to census returns had emigrated from Canada. However, when his father enlisted in the army during the First World War he gave his birthplace as Barbados.

An exceptionally quick player, he was said to ‘provide plenty of opportunities for his teammates ‘ and ‘packed a tremendous shot in both feet. One scribe wrote: ‘He is a dangerous winger who has given many full backs an uncomfortable afternoon and needs close marking;, while another commented ‘he had speed and cleverness, and his unselfishness is an excellent trait.’

Wales won the then ‘home nations championship’ 3 times in the 1930s – if the Welsh FA hadnt followed England in 1928 and quit fifa for 20 years you have to wonder how Wales would have fared if theyd participated in the 3 world cups in the 1930s? Looking at the strength of football in the uk at the time theres every reason to think Wales would have done well in those early world cups

Sounds superb, already on my list, all the best with it!