The family of Reading and Cardiff City cult hero Robin Friday will be guests of honour when the two sides meet at the Madejski Stadium on Saturday.

This year marks the 150th anniversary of Reading Football Club – and with it comes a special exhibition at Reading Museum.

Amongst the memorabilia on show is a jersey, some photographs, and autographs of an extraordinary player for both clubs – the late, great Robin Friday, who would have turned 70 this summer.

Robin’s family have been invited to attend the ‘Robin Friday derby’ against Cardiff City this weekend.

Among the special guests of honour will be Robin’s daughter Arabella Jones and her husband Adie, Robin’s grandchildren, Libby and Louis, and Robin’s former wife, Liza Friday as well as Robin’s twin brother Tony, and his daughters, Chloe and Holly (Robin’s nieces) and Robin’s great nephews Teddy and Joey.

Also in attendance will be author Stuart Kane, who has written two fact-based novels about Robin Friday entitled Man Friday – The First Half and The Second Half. 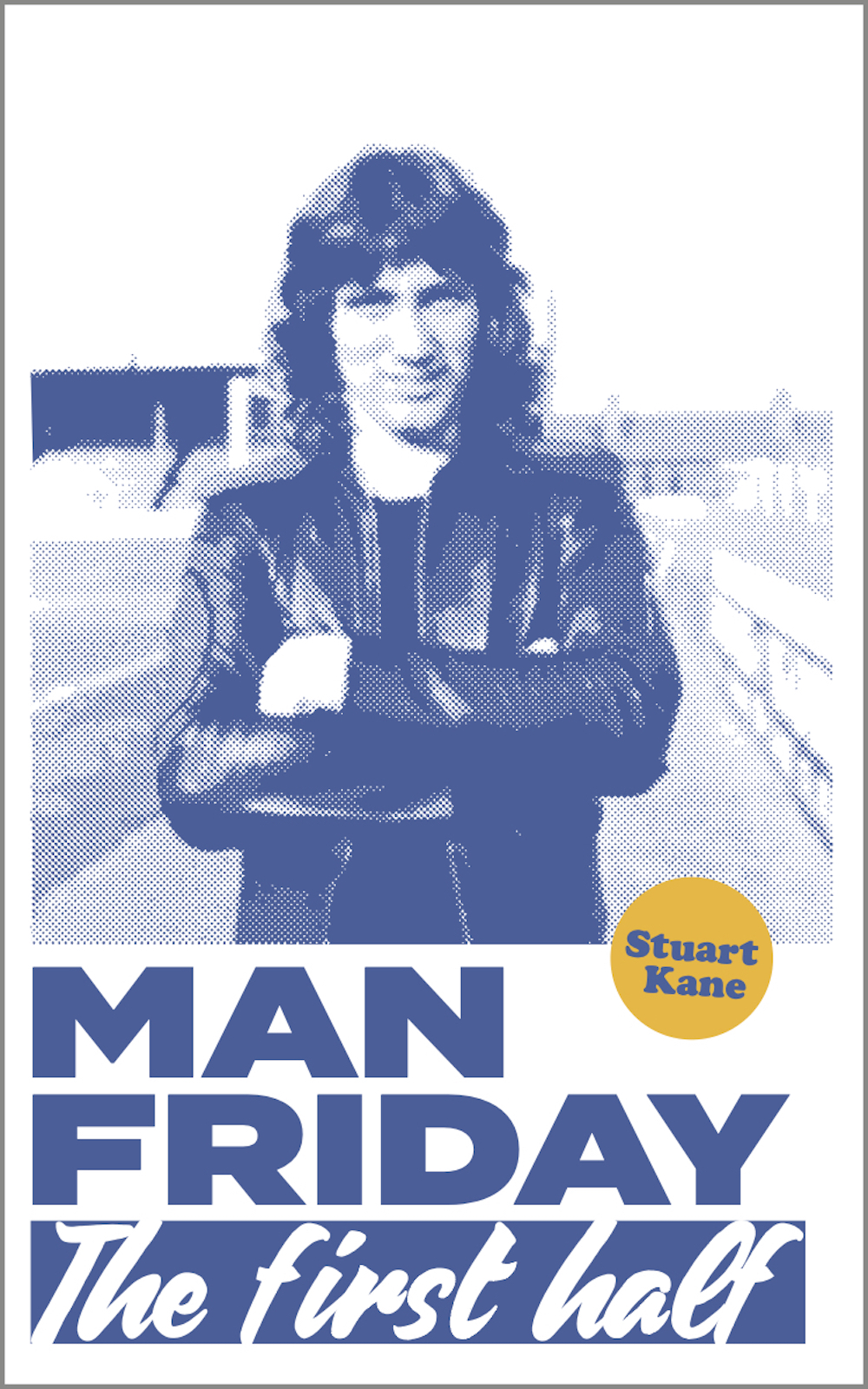 Robin’s grandchildren will deliver the matchball to the centre circle ahead of kick-off between the Royals and the Bluebirds.

It’s sure to be a vociferous occasion with Cardiff having sold out their allocation of more than 2,000 tickets.

The legend of Robin Friday by Stuart Kane

Robin Friday was a supremely talented player blessed with skill and an incredible footballing brain – he had superb vision, could use both feet and was brave. A centre-forward who could tackle, score, and make goals. He won player of the season twice at Reading in both of his full seasons at Elm Park. Robin was also voted Reading and Cardiff City’s ‘All-Time Cult Hero’ in a BBC TV poll in 2004 and was voted Reading’s ‘Player of the Millennium’ in 1999. He is an all-time great and will never be forgotten by those Royals supporters who saw him grace the Elm Park pitch in that era.

Robin’s journey is the story of a raw footballing talent who battled his way to achieve his dream of becoming a professional footballer despite many obstacles. Rejection by Queens Park Rangers and Chelsea as a youngster left him disillusioned with the game. Robin never lost faith in himself, and he knew he had more than enough ability to play in the Football League. Robin said, ‘I wasn’t going to change my approach to the game. I wasn’t interested in being a robot.’

Robin was a non-conformist, and he had his own tricks and skills, and he just wanted to entertain the crowd, and boy, did he entertain! Before joining Reading, he starred for Walthamstow Avenue and Hayes in the Isthmian League. Then came the magic of the FA Cup, where Robin caught the eye of Reading’s manager Charlie Hurley in a second-round tie between Hayes and Reading. Reading saw off their non-league opponents but needed a replay.

In July 1972, shortly before his twentieth birthday, Robin fell through a roof while working as an asphalter. He landed on a metal spike that went through his backside and into his stomach, missing his vital organs by inches. He underwent an emergency operation and had to have a stoma for a while. Within three months, Robin was back on the pitch playing again, such was his strength and determination.

After scouting and research, Charlie Hurley brought Robin in on trial for the reserves in November 1973. Delicate negotiations brought him to Elm Park, and he signed amateur forms in January 1974 and pro-forms shortly after. Robin made his home debut in the pouring rain against Exeter City. His two goals and a dazzling performance made it love at first sight for the Royals fans. Many outstanding performances followed.

On the 9th April 1975, Reading were playing Rochdale at Elm Park, when with the score level at 1-1 and the final whistle looming, Robin Friday pounced onto a deflection off the Rochdale keeper and stroked the ball into the back of the net from five yards out. Robin ran behind the goal, spotted a lonely policeman, lifted the policeman’s hat up, and planted a big kiss on his forehead. A photographer beautifully captured this special moment. It was an unlikely pairing given that Robin wasn’t a fan of the ‘Old Bill’.

His wonder goal against Tranmere, which left World Cup referee Clive Thomas stunned, has since entered football folklore. In the 1975-76 season, Robin and Reading would go on to win promotion to the Third Division for the first time in fifty years.

Robin’s performances at Elm Park attracted the attention of many clubs. He had a queue of admirers: Ron Saunders, the Aston Villa manager, was a big fan, as was Terry Venables at Crystal Palace. Arsenal, Sheffield United, Wolves, West Brom, Liverpool, and a host of other clubs all showed interest in Robin Friday. Still, after a bit of research, the clubs perhaps felt that Robin was too hot to handle. Eventually, even Charlie Hurley couldn’t control Robin, and Jimmy Andrews of Cardiff City came in for him in December 1976. Robin left Elm Park for Ninian Park.

His Cardiff City debut versus Fulham in January 1977 was Roy of the Rovers stuff. He went through the Fulham defence like a hot knife through butter. The former England captain, Bobby Moore, did not know what had hit him that day – Robin scored a brace as Cardiff City thrashed Fulham 3-0. Robin did have some standout out performances at Cardiff, who were then in the old Second Division, now the Championship – including the infamous game against Luton Town when he was caught on camera flicking the V’s to the stranded opposition keeper, after slotting the ball past him.

The iconic image would famously be used as the cover of Super Furry Animals’ ‘Man Don’t Give A F*ck’ single.

Former Royals legend and gentleman Maurice Evans said that Robin Friday was one of the most talented players he ever worked with. Fellow maverick Rodney Marsh said Robin’s skill level was ten out of ten. Former England international Peter Reid, who played against Robin in Robin’s last professional first-team appearance, said: ‘A wonderful, enigmatic character with breathtaking ability.’

The tales of Robin Friday’s antics both on and off the field are legendary in Reading and Cardiff, and many of those stories are true, but some are a myth. Those who met him say he had a special aura about him and that he was a fearless and exuberant character but that he had a gentle and quiet side too. He liked to entertain both on and off the pitch, that’s for sure. Robin Friday was a unique and complex character. Eamon Dunphy said, ‘Off the field, Robin was wild. He looked like a rock star and lived like one…His dress code was a leather jacket, Cuban heels, blue jeans, and T-shirt. His long hair stood in sharp contrast to footballers’ traditional short-back-and-sides.’

Even though Robin was struggling with off-the-field issues at Cardiff City, he still managed to hold his own and gain fans, such was his skill, showmanship, and personality. He always had time for the fans, and there are plenty of stories of him joining youngsters for a kick about in local parks both in Reading and Cardiff.

Imagine if Robin had looked after himself and kept fit – there is no doubt that he’d have achieved his ambition of playing in the old First Division.

More than 30 years after his untimely death his legend still shines on.

It may not be a popular thing to say but the obstacle that Robin Friday couldn’t overcome was his own personality.’ Imagne that Robin had kept fit and looked a himself’ i.e. imagine he had a very different personality.It tells you a lot about Cardiff City and Reading that they celebrate him I cannot imagine Liverpool etc.doing so.

As a Cardiff fan I actually agree with you Art. Despite his obvious talent, Friday was undisciplined, and Jimmy Andrews took an enormous gamble in bringing him to Ninian Park. By that time Robin was uncontrollable! Sadly, Andrews was too weak to manage him and although Robin had a brilliant debut at a higher level, it wasn’t really followed up. Reading had undoubtedly already had the best out of this player and his overall contribution at Cardiff was poor, scoring only six goals in total. Robin was a regular absentee in training and he didn’t participate in essential team activities.… Read more »