Ask Welsh football fans about their favourite win and you’ll be gleefully retold stories of beating a star-studded Italy 2-1 at the Millennium Stadium, cruising past Hungary in Cardiff to qualify for Euro 2020, and of course those famous and glorious wins against Russia and Belgium in France at Euro 2016.

Due to the national side’s recent success, one match that can inexplicably go under the radar is the 4-1 drubbing that Wales gave England at the Racecourse Ground in Wrexham on 17th May 1980.

Part of the 1979-80 British Home Championship tournament, Wales went into the game as huge underdogs, the albatross of not having beaten England on home soil in over 25 years weighing heavily on the Dragons’ neck.

Welsh legend Mickey Thomas, the maverick winger from Mochdre, scored his first international goal on that beautiful May afternoon in north Wales.

“I always enjoyed those Home Championship games, they were really good,” reflects the 67-year-old. “Obviously playing against England always gives you a bit of an extra buzz, because everyone wants to beat England! They were the big boys, the team to beat. They had more people to choose from for selection, so we were always the underdogs when going into those type of games. But it was something to look forward to, you were excited about those games.”

In the dugout for the first time for Wales was the appropriately named Mike England. The legendary former Blackburn, Spurs and Cardiff City Welsh defender had been appointed manager just two months prior to the match, following a short stint in America with Cleveland Force.

“Mike was great. He had just come back from the States and to be fair to him, he did well,” recalls Thomas. “He was a good manager. He kept it simple and he was very good at what he did. We got some great results under Mike and were pretty formidable at the Racecourse. Nobody really beat us when we played there.”

This had buoyed the English press, whose overconfidence and underappreciation of their opposition irked the new Welsh manager.

Speaking to the Daily Mail in 2011, Mike England said: “I had come back from playing in the States to take the job. I will never forget a television interview I did before the game where the interviewer was talking as if it was an honour for Wales even to be sharing the same pitch as England. I had to explain to him that most of my players played in the top division in England, that they played against each other every week, and there was no way my team would be overawed. I suggested that there was a lack of respect being shown, which I thought wasn’t very sporting and that we were not there as sitting ducks.”

Unperturbed by Wales’ lack of success at home against their rivals, Mickey Thomas corroborates his old manager’s sentiments and remembers that the Welsh players were brimming with confidence in the build-up to the game.

“Obviously, you’re excited to be playing against England as it’s a big occasion. They had some top players in their side, so we knew it would be a challenge, but we had some fantastic players too. We had a good record at Wrexham in terms of winning games, so that was also a boost, and we were up for it. It was a beautiful day, the sun was shining, and the Racecourse was packed to the rafters. The atmosphere was really good. The England fans were very vocal too to be fair. Our fans were just amazing. As you know, the game was very, very exciting.”

Nearly 25,000 fans crammed into the Racecourse that day, and for the home fans it was an occasion they will never forget.

It was certainly a dream debut for England the manager, not so much the nation, who despite racing into a 1-0 lead after 16 minutes, had a day to forget.

England had started strongly, initially taking the game to the home side. Their team, littered with star players including Glenn Hoddle, Trevor Brooking and Phil Thompson, sensed early nerves in their rivals. A short corner saw the ball land at the feet of Leeds United defender Trevor Cherry, who whipped in a left-footed cross that caused chaos in the Welsh box. Wales keeper Dai Davies made a mess of collecting the ball, which was eventually bundled in by Ipswich Town striker Paul Mariner.

However, it took Wales less than four minutes to reply, Dai Davies redeeming himself by starting a lovely flowing Welsh move, the ball arriving at the feet of the imperious Leighton James on the right-hand side via Brian Flynn. James’ dangerous cross was nodded down by Ian Walsh to Mickey Thomas, who duly finished with aplomb. It’s a moment that the former Manchester United, Chelsea and Wrexham star will never forget.

“I remember the ball was played in to the 18-yard box by Leighton James and I gambled. I was always told to gamble as a footballer. I was told to get into the area. Nine times out of ten you don’t get anything, but the tenth time you might. I remember hoping I would get the knock-down from Ian Walsh, and I did.”

Thomas still thinks his goal doesn’t get enough recognition, even after 42 years. “The ground was very dry and it was a really hard surface. I remember the pundits talking about my goal on TV after the game and I felt they didn’t really give me the credit I deserved. The ball bounced up awkwardly and I had to jump and swivel in mid-air to keep it down get the shot on target – and bang, I smashed it right into the back of the net! I think it was a difficult opportunity, but I did it to perfection to be honest. I was pretty nimble in those days, and it was a good goal, I think. I obviously enjoyed that one!”

Back in the game, the confidence of the Welsh players grew as the home fans roared their team on. The Welsh persistence paid off when Crystal Palace striker Ian Walsh acrobatically headed in following some more wing wizardry on the right from James.

The dumbfounded Wales fans could hardly believe their eyes when 15 minutes into the second half, Swansea City star Leighton James capped off an amazing personal display by waltzing through the lacklustre England defence, his initial shot well saved by England keeper Ray Clemence, only for James to nod in the rebound to the elation of his teammates and the exuberant Racecourse crowd.

To finish off a memorable day for the home side, Liverpool legend Phil Thompson netted an own goal for his country following some good work on the right by Wales number 10 David Giles.

Looking back on the euphoric 4-1 victory, Thomas has nothing but great memories. “Obviously, we had a bit of a fright as they got the first goal, which was a bit fortunate for them. But once we got into our stride there was only going to be one winner and we were certainly worthy winners on the day.”

Thomas has hazy memories of the aftermath of the game, but does recall a sense of relief, as well as exhilaration. “When the final whistle was blown, I remember it being amazing. The crowd were unbelievable! I got a goal and Wales got 4 goals against England, it doesn’t get better than that does it?” 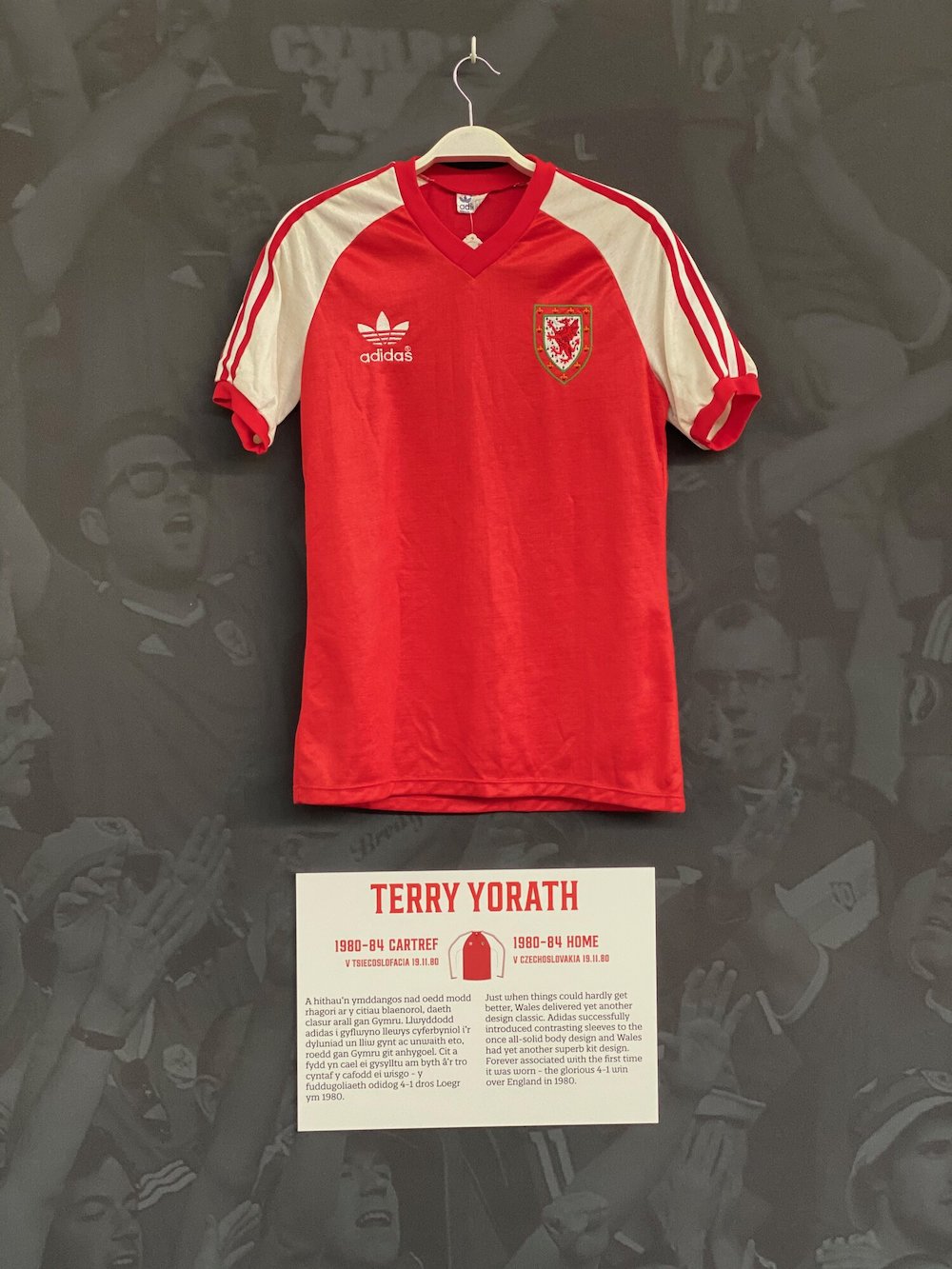 Thomas says that he thinks his goal may rank higher than his infamous free kick for Wrexham against Arsenal in the FA Cup in 1992. “Obviously, the goal against England means a lot to me as it was my first ever goal for the national side. Representing your country is the ultimate isn’t it? And getting a goal against our biggest rivals is special.”

It was not just the Welsh fans who celebrated that night. “I think we all went out for a few drinks afterwards as we were on a high!” reflects Thomas, “I remember us all celebrating in the dressing room. I mean, it’s a win against England isn’t it! Everyone wants to beat them!”

Mike England’s debut as manager saw a convincing win against Wales’ main rivals, their first at home to England since 1955. It was England’s biggest margin of defeat since 30th May 1964, when they had lost 5-1 to Brazil in Rio, a certain Pelé getting on the scoresheet that day.

On what was a blistering sunny day at the Racecourse Ground, England simply found Wales too hot to handle.

WATCH THE HIGHLIGHTS OF WALES 4-1 ENGLAND