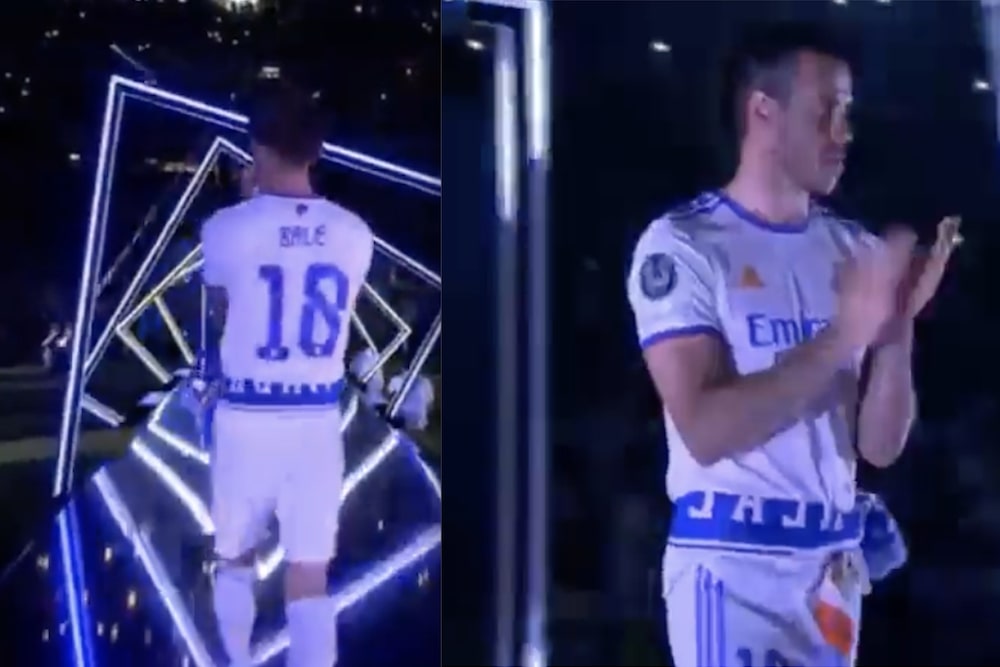 Gareth Bale was greeted with cheers and applause as he bid farewell to Real Madrid last night.

After a parade through Madrid to show off their Champions League trophy they had won after beating Liverpool 1-0 on Saturday evening, the Real players were introduced one by one to the crowd at the Bernabeu Stadium in a glitzy homecoming ceremony.

Bale, whose had a tempestuous relationship with the Real Madrid fans and the Spanish during his eight year stay in Spain, applauded supporters and they in return cheered and applauded him.

In another video shot by a Real Madrid fan, it shows Bale and his family having their picture taken with the Champions League trophy. Supporters chant his name as he, his wife and children wave goodbye to the Madrid fans. When he then goes to sign autographs and have his picture taken with fans he is given a standing ovation.

Whatever the rights and wrongs of the relationship of the Welshman with the club, he has presided over the greatest period in the club’s history, winning five Champions League trophies.

Thankfully as time passes that’s what any Real Madrid fan will remember. In the end they’ll only see the good times and treat Gareth Bale as the true great he is.

Not only a Real Madrid legend but a world football icon.

How fickle the Real Madrid fans are.

These fans are known for how fickle they are, in the past they have booed Ronaldo, Zidane, Benzema, among others, nothing new here.

Agreed, Ronaldo Benzema & Zidane received similar boos when players but not death threats , their cars being attacked by fans and referred to as parasites by the Spanish media.

I think you could hear some background booing on this occasion,Bale did not have to stand in front of that (to us very amusing)banner in Cardiff.

Bale at this point was still a Real Madrid player. And as winner of the Champions League was required to attend a meet and greet fans at their homecoming ceremony. It’s in his contract win or lose. And whether he was booed or cheered in equal measures is immaterial. Their fans are still fickle.

Kieffer Moore and and a Wales coach put that flag INFRONT of him while his team mates sang Wales, Golf, Madrid. Was he supposed to run away and cry even though his country had just qualified for a Euros?