A new documentary film released online today sheds light on Welsh football culture and how it is firing Welsh identity and language.

Titled ‘​​Independent Football Nation’ it tells the story of how following Welsh football has become the quintessential expression of a modern, bilingual Welsh identity.

Here filmmaker Greg Caine talks about the film, created in conjunction with Copa 90, and why he was so keen to tell what has become a compelling story of the reawakening of a nation.

Where did the idea for ​​Independent Football Nation come from?

I’ve always thought of sport as a way for me to engage with my Welsh identity, so it’s a topic I’m really passionate about. I think it’s a fantastic vehicle for us as a nation to express ourselves and I think football has evolved into something which fulfils that role better than anything else. The Welsh language is obviously another big symbol of our identity, so the way those two have come together over the last few years is a story we wanted to tell.

The 1-0 home win against Belgium in the Euro 2016 qualifiers was the first ‘big moment’ that sticks in my mind for the way the anthem was sung during the match. We were 1-0 up and were under the cosh a bit, and then the fans started singing it and you could just see the affect it had on the players – it made me think “wow, this is special”, and different to anything I’d experienced before. 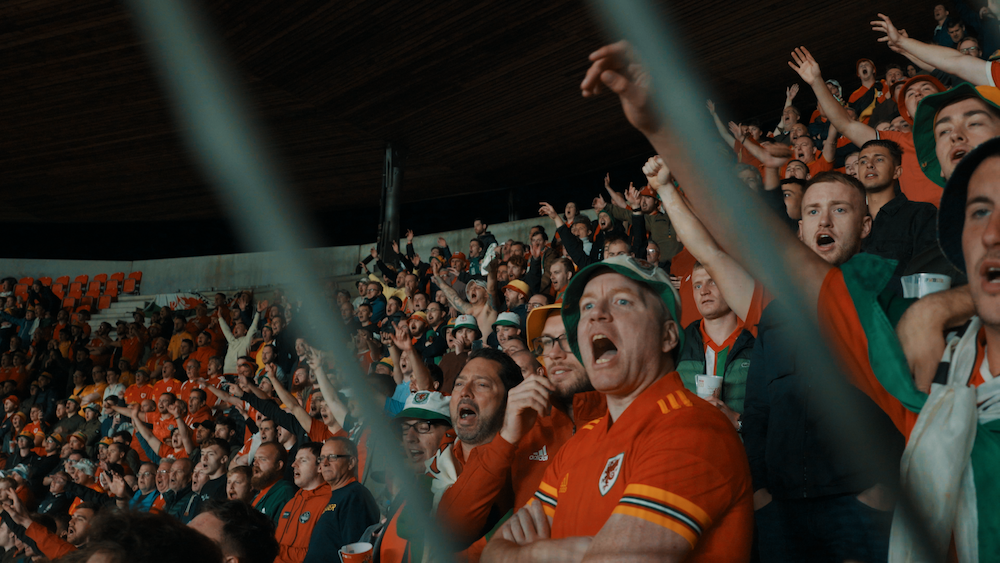 Then over the next couple of years it just grew and grew, with obviously the Euros themselves and then the anthem before Ben Woodburn’s winner and the first ‘acapella’ rendition before the Republic of Ireland match. It wasn’t just the anthem though, it was also hearing ‘Calon Lan’, ‘Yma O Hyd’ etc. being sung at the football.

With the work the FAW had done to increase the visibility of the Welsh language, both around the ground and in their media output, it felt like now the fans were really embracing it and making the language a core part of supporting Wales, for fluent speakers and learners alike.

As a learner personally and someone who cares a lot about it, I was absolutely loving it and still do. From speaking to older fans, it became clear that not only had it not always been like this, but it was actually a complete sea-change. It was also obvious from speaking to people that this culture was amplified on away trips, so we decided to get amongst it and see for ourselves. 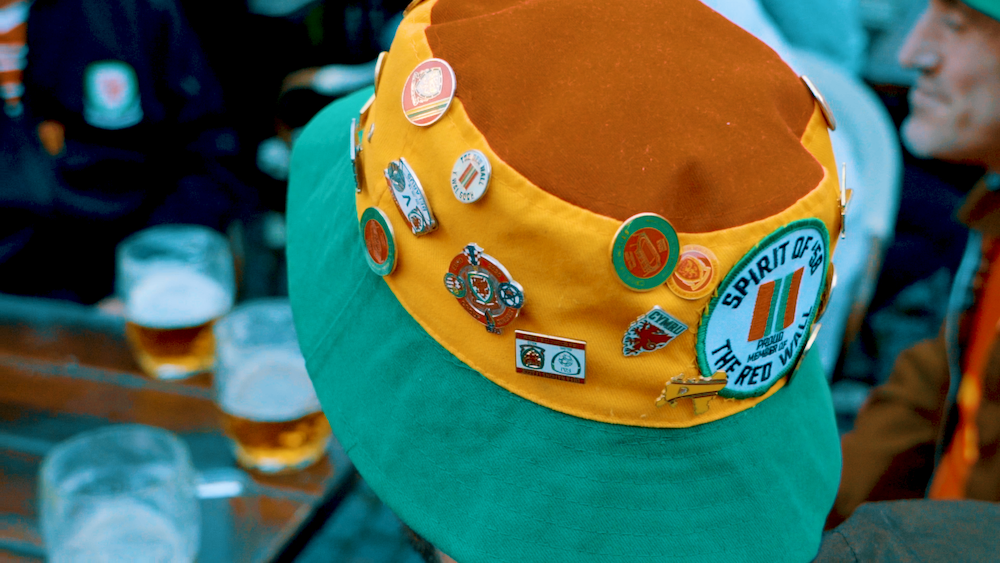 What are your aims and ambitions for the film?

Copa 90 have a massive following, not just in the UK but in Asia and the USA as well. Because the film was all about Welsh identity in football fan culture – with the Welsh language a central part of that – I felt it was really important to include as much Welsh as possible, to promote it to a wider audience but also within Wales too, much in the same way as Ryan Reynolds and Rob McElhenney have done.

Copa 90 were really supportive regarding that and were fully committed and enthusiastic to everything I suggested, from interviewees speaking Welsh, to having full Welsh subtitling, to bilingual social media posts promoting the film. So to answer your question: if the film inspires one person to start supporting Welsh football, or take up learning Welsh, or both, then I’ll be happy!

But I think the most important thing for me is that Welsh fans enjoy it and feel that the film is a true representation of the culture.

When you drew up a hit list of what you want to convey in the film what were they?

The main thing was capturing the relationship between Welsh football and identity in a way that’s true to what it is. I think fundamentally, supporting Wales for most people is still about the football and we didn’t want that to be overlooked, but we also wanted to celebrate the fact that identity, the Welsh language and football have come together to create the unique culture we have now.

The other important thing was to give it context, because I think the amazing thing about it is how much it has changed. When you hear people say that in the 70s/80s/90s people didn’t even know the words to the anthem, and when you hear about the negative attitude many people had towards the Welsh language, I think it’s incredible we’ve come from there to where we are now. It was important to get that across – it’s not just what it seems on the surface, it’s not tokenistic, it’s actually in my opinion both a massively influential force as well as a reflection on societal attitudes towards Welsh and what it means to Welsh people to be Welsh. 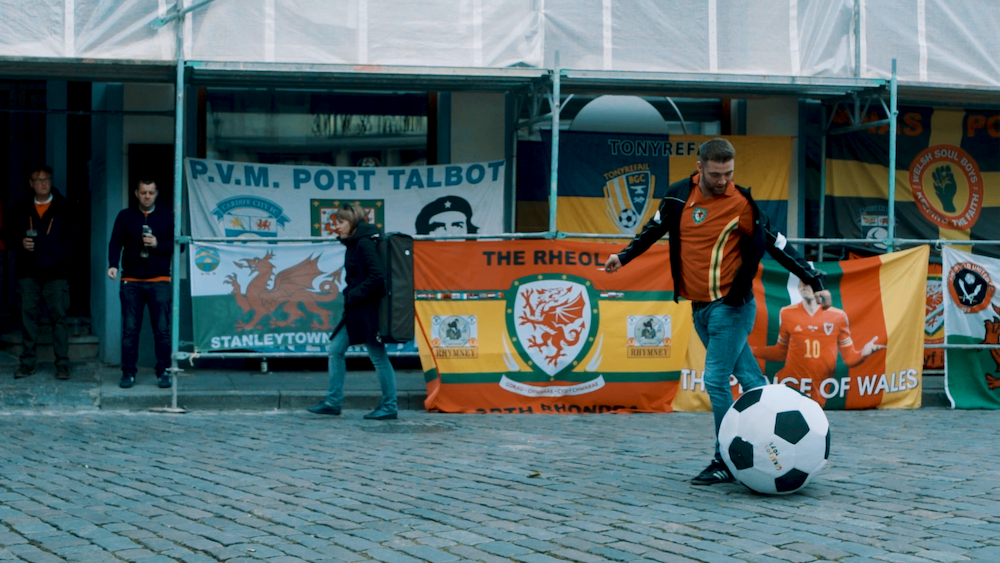 What is it about the Wales national football team that makes it so different from its rugby counterpart?

As a passionate rugby fan myself, I think rugby still plays an important part in Welsh culture and I love watching Wales and the Scarlets play. But from a purely match-going perspective, I think football has gone in one direction and rugby has gone in the complete opposite. I think the fact that we have the Canton Stand in the football, with most people sat/stood in the same place every game, has helped to create an atmosphere and that makes a difference. All the songs start there and the rest of the stadium follows, whereas at the rugby you don’t have that at all, and if you do try to get a song or two going you get looked at like you’re a madman. I can’t remember the last time I heard a song other than ‘Hymns and Arias’ at the rugby. There’s a lot being said about the ‘event-going’ culture at the moment and I think that also has an impact.

But I also think as football fans we shouldn’t take it for granted or be too quick to stick the boot into rugby, as what we have at the football now has taken a lot of work and isn’t something that’s happened overnight. The FAW and the fans deserve enormous credit for overcoming the issues we faced in ‘the bad old days’, but we also shouldn’t forget it wasn’t that long ago and we need to be careful not to get too self-congratulatory!

There’s very much a sense of belonging that is tied in with the national side which is much about pride and identity as it is about the football – where does that come from?

I think a big part of it is the bond between the players and the fans. It’s become a bit of a cliché but it’s true – the fact the ‘Red Wall’ was a name given to the fans by the players says it all. The players (supposedly led by Chris Gunter) asking to have the backing music for the anthem turned off shows the players appreciate and have a fundamental understanding of the fanbase. The whole ‘Red Wall’ ‘Together Stronger’ culture, that’s been built by the fans, the team, and the FAW, has been completely bought into by all involved.

Can Welsh national football fire the independence movement and the growth of the Welsh language?

I think it can definitely play its part. In terms of independence, the work that’s been done by Welsh Football Fans for Independence has already had an impact. On a personal level, I’ve been a supporter of independence for a few years and going along to the pre-game marches they organise has definitely helped to consolidate that, and I’m sure that’s the case for many others too. In terms of the language, so many people I know or have spoken to have said following Wales has inspired them to learn it. As is mentioned in the film, it’s made it ‘cool’, and you can’t underestimate the power of that. The same can also be said for independence too actually.

It’s weird because the whole independence/football/Welsh language culture is still relatively fringe, and a part of me likes it that way – but I know for Welsh football to be successful, for us to be independent in the future, and for the Welsh language to grow to where we’d like it to be, that would all have to change!

What is your own personal Wales supporting history?

My first memories of supporting Wales are from the Euro 2004 qualifying campaign, and being heartbroken by the Russia play-off defeat. My first home game was in 2011, England in the Millennium. My first away game was Czech Republic in Prague, 2021 – I spent most of the game filming for this documentary but I did manage to enjoy it still!

This is an excellent film. The atmosphere at Welsh football internationals is incredible. So much passion, fun and humour. Long may it flourish, and continue to act as a vanguard for our movement towards self-determination and political freedom.