Proud Welshman Callan Bowden is part of a group of expats promoting the World Cup in Qatar.

Working as a project manager he’s been instrumental in promoting Wales to a global audience appearing on TV in the Gulf ahead of the biggest football tournament on the planet.

The 28-year-old is also a super fit sports trainer and a former player at Afan Lido FC in the Cymru Premier.

As Wales flags and banners showing stars such as Gareth Bale have appeared around Doha, the visibility Wales is receiving is unprecedented.

Parties and events for Wales fans are being organised and plans are well underway to greet the Welsh supporters when the World Cup kicks off on November 20.

With flags of the competing nations dotted around the city, Callan couldn’t bear to see the Red Dragon caught up on the front of a building in Doha, so the super fit Welsh Spiderman did what most of us probably wouldn’t have done and scaled the front of the building to rescue Y Ddraig Goch

Helped by the patchwork of metal on the building he climbed more than 20ft up to rescue the flag, much to the amusement of a mate who provided a running commentary on a video of Callan’s exploits that was posted to Twitter.

As for what Callan’s family thought of his highly risky escapades, well it appears his poor mum saw it all unfold on Instagram!

While we wouldn’t recommend scaling the front of buildings, we can only admire Callan’s patriotism and dedication to the Wales flag. 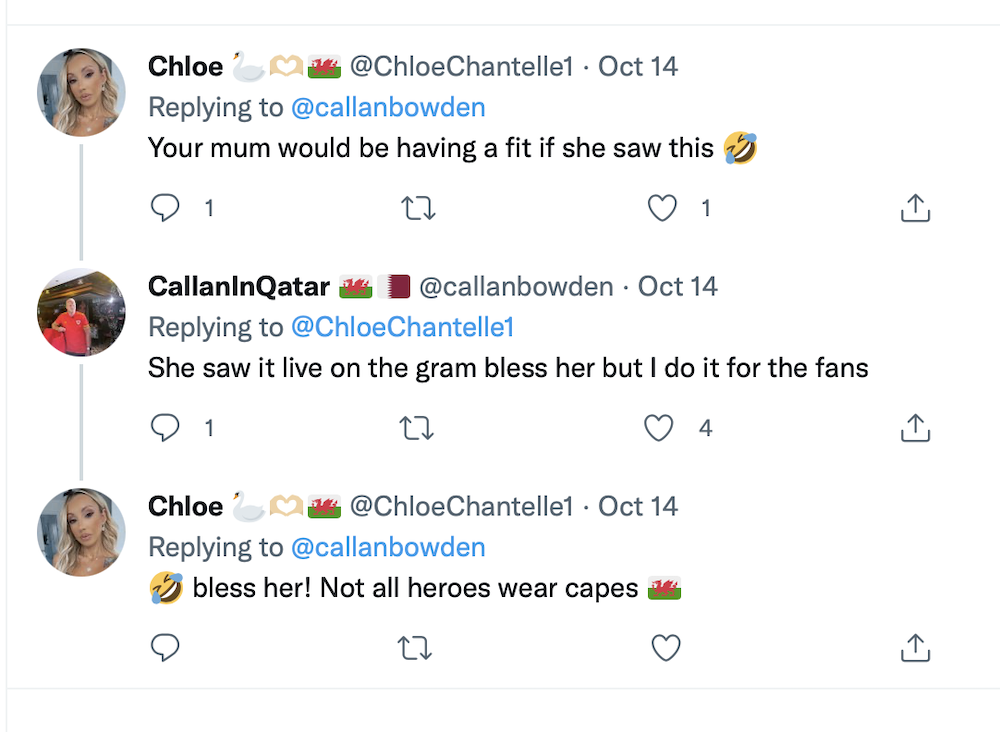 Anyone thinking of doing anything similar in Qatar during the World Cup would be advised to think more than twice. Among other dubious law enforcement bodies on the streets will be 3,000 Turkish riot police and 100 of their special forces troops. They tend not to take prisoners.