Michael Sheen is a man of many faces.

He’s an acting chameleon who can inhabit a character with endless ease.

The Welshman is also one of the most popular actors to paint and photograph.

The recent giant mural of him unveiled in his hometown of Port Talbot is testimony to the fact.

However, it’s unlikely he’s been depicted in this form before.

The Royal Society of Portrait Painters annual exhibition opens at the Mall Galleries in London today and runs until the 14th of May. It’s a great pleasure to see my drawing of Michael Sheen @michaelsheen selected and on show along side so many outstanding works on display there. pic.twitter.com/M1w6MJG1O2

This image you are looking at is not a photograph, it’s a pencil drawing – and one of the most remarkable pencil drawings you will ever see.

When the artist responsible for this breathtaking work of art, Martyn Burdon, posted it on social media the reaction was overwhelming – from those astonished by his skill and others who couldn’t believe this wasn’t a photograph, such was the detail the drawing contains.

Twitter user @SuzeBHarrison summed up the general mood when she posted: ‘My brain can’t compute that this is a drawing. I’ve stared at it for an age. Truly exceptional. It’s a drawing?!?! A DRAWING. What an outrageous talent you are. (Both)’

And it’s not just the general public who have been captivated by this wonderful image, Martyn’s drawing features in the Royal Society of Portrait Painters annual exhibition which opened at the Mall Gallery in London this week, where it’s also available to purchase for ‘small’ fee. 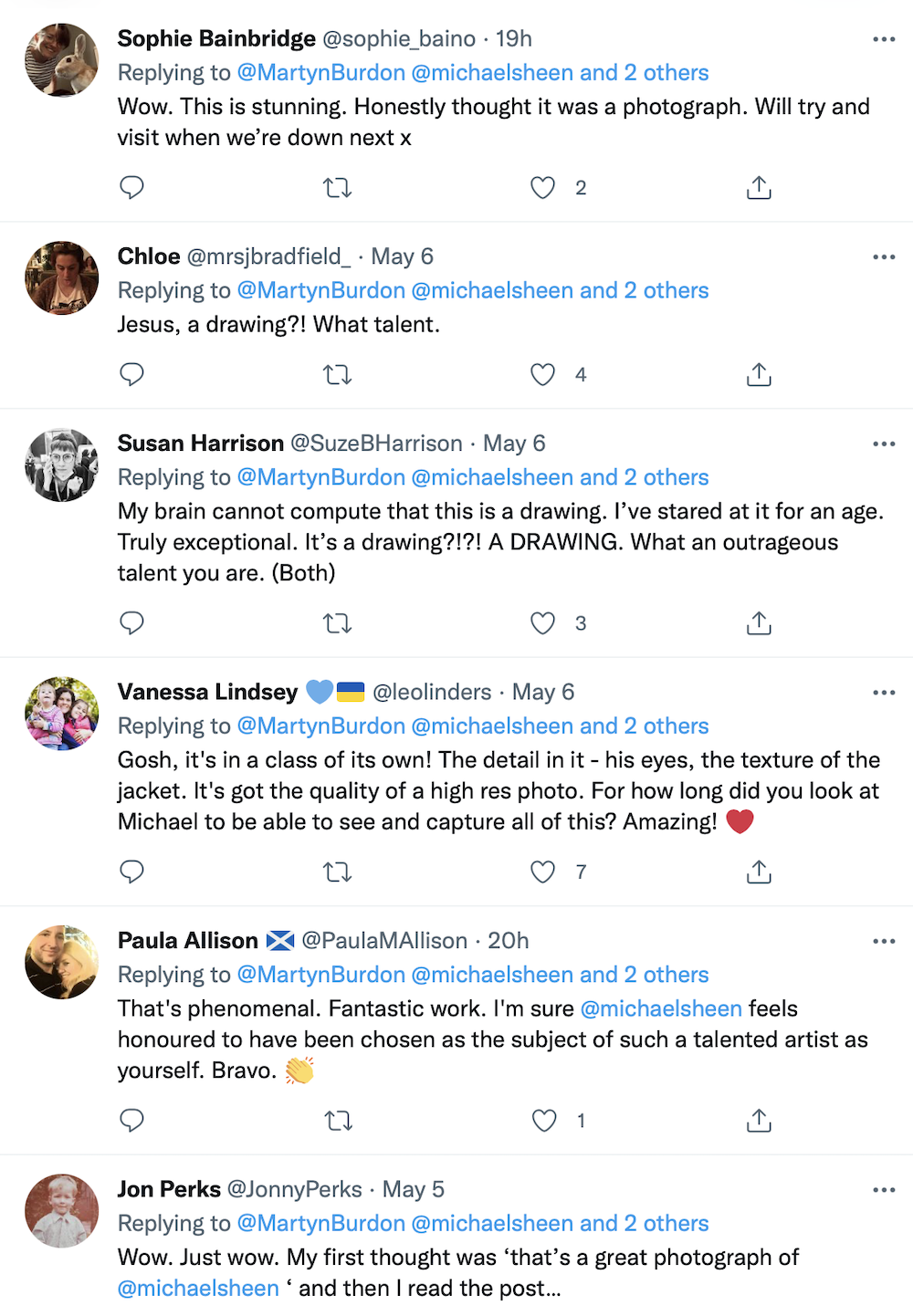 “What you see in a portrait of mine is always just my impression of an individual’s personality on that day,” said Martyn. “If I am working with someone who may already be familiar to me from their depiction in the media. I just try not to let that influence me and concentrate on the person as they are, in that moment.

“I just try to capture truthfully what I see when I meet someone. Any portrait is usually as much about the artist as it is about the sitter, so in one of my paintings, I think you are just seeing my interpretation of another person. You are seeing them, reflected off me. I also try not to flatter anyone that I paint or draw, I just try to be honest.

“I probably spend more time drawing than I do painting. I really love to draw, and whether it’s using pencils or charcoal, drawing is predominantly focused on just light and shade. I love the bold simplicity of it. My painting style maybe owes a lot to my fascination with drawing.

“A monochrome image can have a weight to it, a sense of importance, it can seem old, but it can also seem ageless. Maybe I’ve just watched too many black and white movies!”