Some of the biggest names in rock music have paid their tributes to Burke Shelley, who has died aged 71.

The frontman and bass player of Welsh rockers Budgie passed away at the University Hospital of Wales in Cardiff.

Announcing his death on Facebook, his daughter Ela posted: “It is with great sadness that I announce the death of my father, John Burke Shelley,” she posted.

“He passed away this evening in his sleep at Heath Hospital in Cardiff, his birth town.”

While not gaining the commercial success of those they influenced, Budgie were trailblazers for the hard rock scene in the ‘70s and a guiding light for many of the new wave of British heavy metal bands of the ‘80s.

They were arguably the most underrated but the most influential Welsh rock band of all time.

Their imprint can be keenly felt on everyone from Judas Priest to Iron Maiden, Metallica to Motorhead.

The Cardiff band gained a whole new audience thanks to Metallica who professed their love of the Welsh rockers, covering their tracks – Breadfan and Crash Course in Brain Surgery. 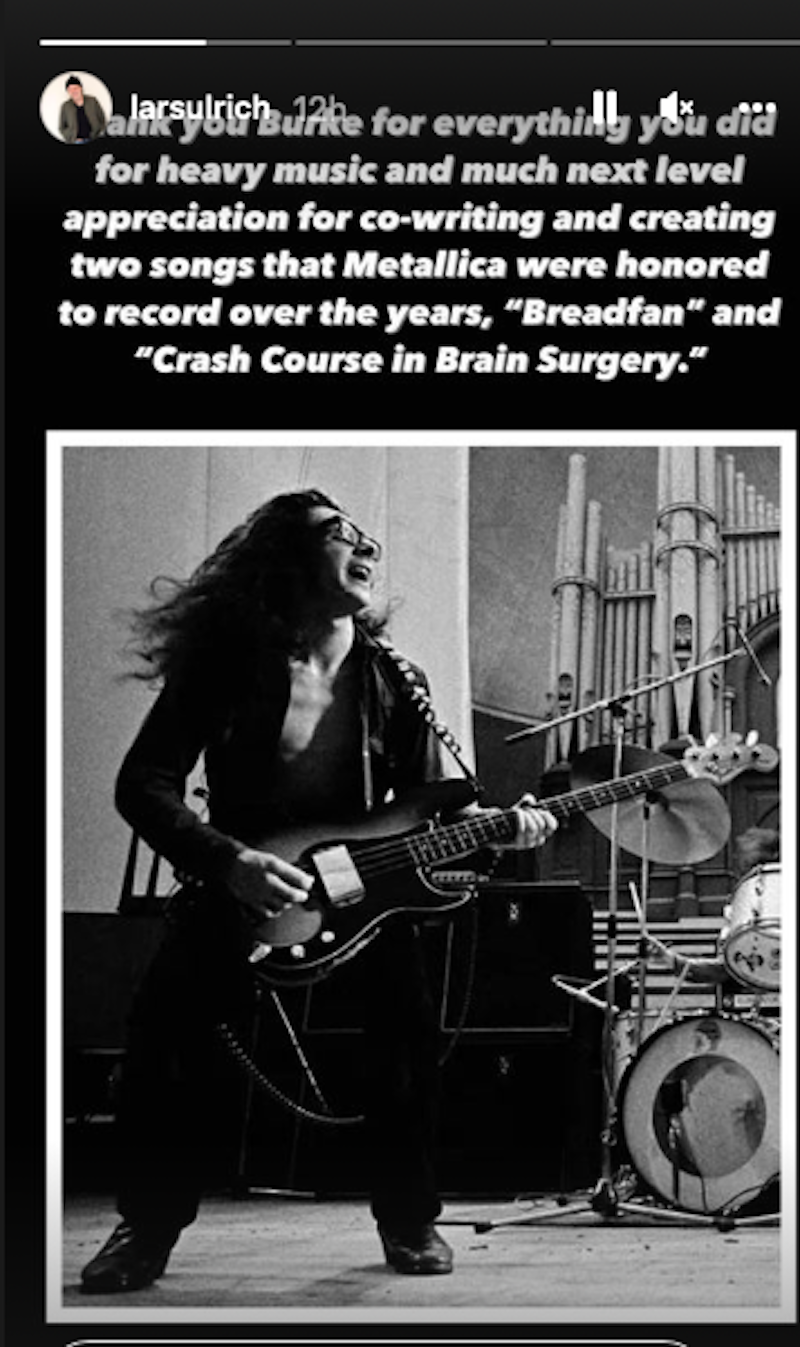 Metallica’s Lars Ulrich was one of the musicians leading the tributes to the bass player.

Sharing a photo of Burke Shelley on his Instagram stories, Lars Ulrich wrote: “Thank you Burke for everything you did for heavy music and much next level appreciation for co-writing and creating two songs that Metallica were honoured to record over the years, ‘Breadfan’ and ‘Crash Course In Brain Surgery’.”

Motorhead’s Phil Campbell paid tribute to the Welsh musician remembering how he played on the same bill as Budgie in the late ‘70s.

Sad to hear of the passing of Burke Shelley. I played support to them as far back as Persian Risk days. They were pioneers and produced some of the heaviest riffing you could imagine. Thoughts are with his family. RIP welsh hero.🎸 pic.twitter.com/xl53AZO77r

Steve Albini of US punk pioneers Big Black revealed his love of Budgie posting a tribute to the Welshman on his Twitter.

Requiescat Burke Shelley of the great heavy band Budgie. All their songs were weird and cool and they remained a genuine inspiration through punk and everything after. https://t.co/0RPZOswAcr

Speaking to Nation Cymru’s David Owens back in 2018, Nicky Wire wore a t-shirt in tribute to the Welsh rock legends and extolled the virtues of ‘Panzer Division Destroyed’ from the1980 EP ‘If Swallowed Do Not Induce Vomiting’, before enthusing over a b side to the single ‘Keeping A Rendezvous’ called ‘Apparatus’. “Absolutely incredible,” he said.“Then there’s Parents – from the early ‘70s it sounds like Radiohead with Shirley Bassey singing. It’s f****** amazing.”

Shelley had been suffering from Stickler syndrome, a genetic disorder that can cause serious vision, hearing and joint problems.

In an interview with Nathan Bevan of WalesOnline he revealed how he’d been diagnosed with an aortic aneurysm – a dangerous and abnormal swelling of the main artery that supplies blood to the body – but had turned down surgery in case it caused irreparable spinal damage and left him bed-bound or in a wheelchair.

While Burke Shelley may no longer be with us, his and Budgie’s legacy is assured.

A new generation of Welsh artists are intent on keeping his flame burning brightly.

Merthyr rock band Florence Black, whose guitar player Tristan Thomas has recently been named the best new guitarist in the world, are huge fans of Budgie and have recorded a coruscating version of Breadfan.

Manwhille, Cardiff power tro The Biggest Thing Since Powdered Milk, take their name from the Budgie song of the same name and posted this touching tribute on Facebook today.

That’s the trouble for “my generation”, we do get old and the loss becomes more frequent. Thanks for the journey Mr Shelley, it was a blast.

Budgie: first band I ever saw live, at the age of 15 in the Top Rank, Swansea in 1982. Absolute trailblazers – catchy riffs & a deep down heavy sound. Top band, they broke the mould after making them. So sad to hear Burke Shelley has left us

The Biggest Thing Since Powdered Milk

Thank you for the inclusion in this tribute. Our thoughts are with Burke’s family.

Burke Shelly; end of an era.

Budgie, one of the greatest and most influential rock bands of all time. Followed them from 1972, and seen them live on several occasions, until they disbanded.

I remember speaking to Burke backstage at the Empire Theatre Liverpool in 1978, he was humble and a true gent; it was a privilege to meet him. Sad news for his family and the world of music.

Awww! Man! Heart broken.  Burke Shelley was such a great vocalist. While Budgie was a great band for metal heads, they were the Welsh RUSH. In for the kill, will for Always be, a groundbreaking album, and sound as great now as it did back in the 70s. We have just lost a big star, http://www.darklyrics.com/b/budgie.html God bless. and a big thank you. I had a wonderful time. enjoyed every gig. You are a sound in my head, Sew up my ears with your thread With you on my head and me on my toes Wondering what everyone knows, Wondering… Read more »