Review: Doom of stars is compelling story-telling shored up by a level-headed sense of what science can do 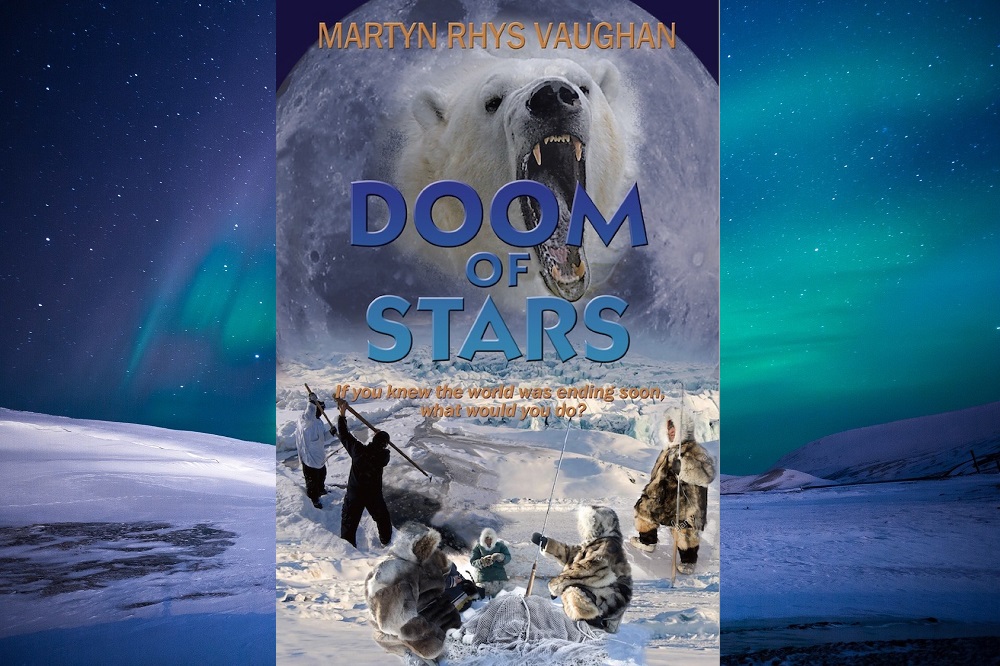 This latest piece of “hard” science fiction offers further evidence of Martyn Rhys Vaughan’s seeming relentlessness when it comes to generating stories. The books seem to now appear annually, as sure as hard quality comes from an adherence to scientific fact and logic, reining in the imagination a tad to allow more plausibility. This is Vaughan’s fifth fictive probe sent out into the furthest reaches of the universe and into the possibilities of physics, following books such as Domains of Darkness, Quantum Exile, Hideous Night and The Cave of Shadows. But this time he opens his journey of the imagination with a real Boys’ Own- style Arctic adventure, full of slavering wolves and the threat of gigantic waves which can tear open the pack ice as surely as those flashing lupine incisors would do a hare.

Our heroine Kalli is living a primitive hunting life in the Village where the inhabitants have to catch meat with which to barter in the city, a replacement dowdier version of the London that has been partially destroyed. In between failed attempts to capture seals at blowholes she finds herself drawn into mysteries involving her parentage, and even more so her brilliant grandparents, one of whom creates the means by which one can capture memories while the other is unfairly accused of nothing less than bringing the world to an end.

Her adventures bookend the story of her scientist grandmother Adekola who is drawn into the orbit of a ruthless scientist, Dr. Elizabeth Baldwin. She takes self aggrandisement to another level, believing herself to be the very embodiment of ‘thumos’ being the idea of greatness which embraces a contempt for the everyday or quotidian.

Baldwin’s pet project, which she will stop at nothing to advance,  she calls Project Independence, an experiment which involves creating wormholes in the universe from Plato Base through which she can which she can take samples of places which are very far away. This is being performed by Baldwin in cahoots with some very bad people who want to monetize such scientific ventures and keep the profits for themselves rather than for the benefit of humanity. Which means that some thuggish goons straight out of central casting are never far away from the scientists while Baldwin herself carries old fashioned firearms, in a nice steam-punkish touch. Baldwin forces Adekola to record a false confession that she has occasioned massive destruction in the universe and it is left to Adekola’s husband, Welshman Idris Parry, to exact revenge for this pan-universal character assassination by killing the seductive scientist Baldwin at his home in Greater New York.

Kalli’s story, meanwhile, finds her journeying to a part of the new geographical entity Westrania that once was America, having met and fallen for a dashing helicopter pilot, Jason who is involved in “harvesting” women and men who can be used to colonise new planets. They are both taken captive by a self-styled pastor who seems hell bent on disrupting plans to settle on Venus and in this way is set up one of the book’s many dramatic or explosive events.

This is compelling story-telling shored up by a level-headed sense of what science can do, as in the passage which describes Adeloka’s return to earth from space:

The orbital transfer vehicle had been shaken like a rat in a terrier’s mouth as it arrowed down through the exosphere into the mesosphere. Although she was scientifically certain that the inferno outside caused by the craft’s blindingly fast passage through steadily thickening layers of air could not penetrate into the passenger section, it was still nerve-wracking to know she was merely metres away from plasma at thousands of kelvins.

It’s a hoary old chestnut to suggest that writers create their own worlds but in the case of Martyn Rhys Vaughan that is certainly the case and then some. He is an intrepidly bold adventurer in the realms of speculative fiction, who can take the reader along with him to extraordinary places, offering glimpses of a what-might-be future of ruined metropolises and a climate out of kilter and of an earth doomed to hear the sounds of humanity’s sand-timer running swiftly out of so much as a grain of hope.