Bill Rees is from Bangor and used to run a bookshop in the town but has been living in France selling second-hand books for the last twenty years or so.

His memoir, The Loneliness of the Long Distance Book Runner was published 10 years ago and he writes here about his new book, A Late Return: Table Tennis à la carte, reflecting on the highs and lows of playing competitive table tennis in his fifth decade.

For several years now, principally on Sunday mornings, I have been playing competitive table tennis for Le Vigan, a small Cévenol town in southern France. For away games, I drive to its outskirts and meet up with three teammates who have done likewise. We then pile into one car (invariably Alain’s) and set off, our destination being a sports hall in either Nîmes or one of the surrounding villages. We arrive to find blokes with bats bashing balls about on a table. For several hours we join in before journeying back to Le Vigan and our parked cars. We then go our separate ways, like bank robbers after a heist!

Above is the description of my sporting sorties I would give to friends, until I came to believe I was selling myself short. It was way too reductive. There was more going on. Ping pong players being these bundles of emotions, anxieties, frailties and strengths. So I decided to write in more detail about the atmosphere of these contests and the personality of their participants. Serviceable French means I understood the players’ dialogues and I am fluent in ping, but actually writing about what goes on still posed a challenge.

There is no great tradition of ping pong literature, I uncontroversially assert. However, Howard Jacobson wrote a very good autobiographical novel, The Mighty Walzer, about Jewish boys growing up in Manchester during the 1950s. Table tennis features prominently in their lives. There is even a scene, early on, in which Jacobson cleverly, and quite literally, has the sport interacting with literature; Oliver Walzer practicing shots in his bedroom with an improvised bat – a Collins hardback edition of The Strange Case of Dr Jekyll and Mr Hyde!

Being a bouquiniste (open air second-hand book dealer in France), I also identified strongly with the protagonist’s father who is a market trader. Those early starts to secure a prime trading patch. The fresh air. Meetings with strangers. The serendipity of people stumbling upon things they want. Readers finding books and vice versa. One such kismet book, finding me, is The Rider by Tim Krabbé whose laconic prose has the crispness of a sweetly timed block shot. While The Rider is about bicycle road racing, the narrator’s voice, that of a natural born competitor, is one to whom all sportspersons will instantly relate. The Rider describes a 150 kilometre ride/race in the Cévennes, a range of modest mountains famously associated with Robert Louis Stevenson’s Travels with a Donkey, a place where I have the good fortune to live. Repeatedly read, Krabbé’s book became a template for mine. Both in terms of its structure and writing tense: first person present. The tense of competing.

My book describes a half-day table tennis tournament. We are inside my head, privy to my thoughts on the sport itself and the characters competing to win the Criterium regional veterans as organised by Ligue Occitanie de Tennis de Table. Entrants are men aged forty and above, all primed to do battle with bat and ball, and all armed to the teeth – with cleaning fluid, sponge and cloth, so as to remove interfering micro fibres.

I wish to show the sport for what it is: painful, exhilarating, tactical, fast, consuming, and all revealed from the perspective of a Brit playing in French leagues. Based on my own playing experiences, the writing hopefully conveys the pain of competition, the agony of defeat and the joys of victory. Neither is ever a given. Each game ends in a gain or a loss, but of what exactly? Points, self-respect. What are the true stakes? I am still working on an answer. Because I want to get at something deeper than a middle aged bloke’s bid to escape a humdrum Sunday.

Ping pong is a sport rich in challenges. Varying distances between player, table and ball require a constant reassessment of them all. The variety of opponents’ bats (including those with pips – bats out of hell) require a flexibility of touch and tactics. Curious trajectories and changing velocities of balls require speedy, incessant calculations. Ignoring the towel merchants, repeatedly wiping invisible sweat from their brows, requires a Buddhist mind-set. Be poised, yet relaxed. Get your mind around that. Fine tune your sense of sight and touch. Train hard to break patterns of bad shot selection. Mind and body disciplined to the activity of table tennis. Not forgetting there is beauty, too, a shot strictly adhering to its function, the perfect interaction of mind, bat and ball. Often at considerable pace. For ping pong is rapid fire: the shots, the points. The momentum of a match may change in minutes. Small margins often determine its outcome. 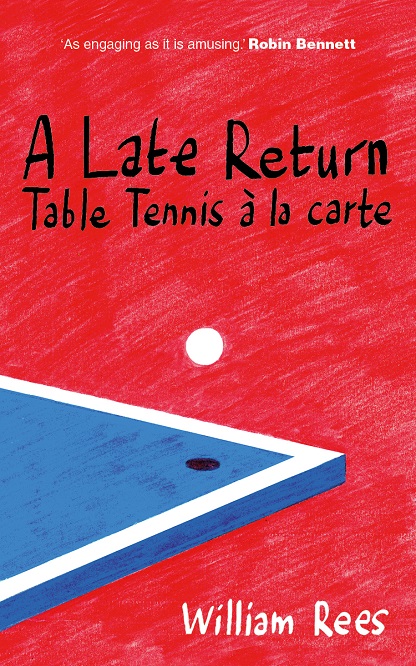 Training hard is no guarantee of success. Come what may, some opponents will slake their victory lusts, youngsters in periods of grace, all atoms co-ordinated, robotically consistent. What to do? Wait for the storm to pass? Wait to clank into gear? How to make them malfunction? Short serves, extra side spin, jerky service returns, reverse pendulum serves; guile needed to scramble their systems.

Not forgetting the league’s speed merchants, looseners of time’s hold. It is as if you are moving through denser air on your side of the table. Our club has one: a fast, hard accurate hitter who operates in his own time zone, wherein balls move at barely credible velocity. An asymmetry of offence (his) and defence (his opponent’s). They appear to have donned a pair of deep sea divers’ boots, yet they take him on, eternal optimists. Sports’ practitioners are so psychologically inclined.

The title of my book is not designed to wind up the Inland Revenue. Rather, there is a triple meaning to it, referring to a shot, to taking up the sport again after a long hiatus, and my tardy arrival for lunch. The book’s working title, The bat, the ball and the bamboozle, while alluding to a myriad balls’ flight paths, overdid the alliteration. The subtitle is to imply a certain je ne sais quoiness, the book’s Gallic aspect which the fine illustrations by Beach nicely pick up on. Also implied is an unlimited choice of shots – my favourite being a wristy topspin backhand!

A Late Return: Table Tennis à la carte is published by Parthian and can be purchased here.