Tôpher Mills talks about his new collection Sex on Toast, strengthening his Welsh identity, and how a creative writing course almost ruined his life

I never wanted to be a poet. I was quite happy to be a prose writer of the literary best-seller kind. However, having failed, at twenty, to get an agent, a book deal or the Nobel Prize, I got the idea that perhaps I was doing something wrong.

In a booklet of extra-mural courses (night classes) I came across something called, ‘Adventures in Creative Writing’. I hadn’t even known such things existed. In my day there were no Creative Writing courses with degrees etc. Now they seem to be everywhere but then, even a creative writing extra-mural course was a rare thing. As I was unemployed I found I could get the course for half price so I signed up.

This was to be the act that almost ruined my life and led me to become that hopeless thing called a ‘poet’. I went along to the class with my short stories to find that just about everybody else there was a poet including and especially the tutor, Chris Torrance. Soon I was writing haiku and before long I was reading and writing poetry as if my life depended on it. To this day I do not fully understand what happened to me, just that I was hooked. I kept trying to resist until my poems started to get published and then a magazine called Poetry Wales actually paid me for a poem. All was lost.

I had known nothing about poetry except that I didn’t like it. When I did learn about it I discovered that I not only liked it but was enthusiastic about it. I had been warned about getting too influenced by any one poet so I read as widely as possible. From Ted Hughes and John Tripp to Walt Whitman and William Carlos Williams among a host of others. I was, of course, influenced but usually only for a few poems before I moved on to the next poetic enthusiasm.

Like most beginners I started out with free verse because it seemed easy. I soon discovered that writing good free verse was the hardest thing of all. Also I had trouble with traditional metrical verse as it seemed alien to me. The rhythms weren’t Welsh or working-class and didn’t come naturally to me. I found it strange that, for the most part, American free verse spoke more naturally to me from the other side of the Atlantic than the Oxbridge poets from England.

Many British poets had adopted the American idiom and applied it to British subject matter. This opened up poetry for writers like myself and enabled us to write whatever we wanted and gave us a valuable alternative to rhyming metre. I quite happily wrote and experimented with different forms as detailed in the section, ‘Early Poems’, which contains most of the early poems I wrote and published, but I was still searching for something. It struck me that the American idiom was American and I began to wonder if there was an English-language Welsh idiom.

One day I turned up to work as a roofer to find that the scaffolding, which should have been put up the day before, hadn’t been put up. As we moped about wondering if we should just go home, the scaffolders arrived and said that it wouldn’t take long to put up. So we went into the kitchen and had a cup of tea. As I sat there I listened to the scaffolders. They were from Ely, which probably explains why they were late, and they had broad, west Cardiff accents. At one point the comedian amongst them pretended to strike up a conversation with the Alsatian dog next door. When the dog barked he pretended to respond. It was very funny and we all laughed. It suddenly struck me that here was my idiom. Like William Carlos Williams writing in the idiom of Paterson, New York, I should write in the idiom of Grangetown, Cardiff.

During the next few years I listened to Cardiffians and tried to identify the traits of the Cardiff accent. As a Cardiffian, to talk Cardiff is easy but to write it down is much more difficult. I saw Tom Leonard, the Glaswegian dialect poet, reading his work and bought a book of his with a brilliant essay on dialect poetry that I learned a lot from and was greatly inspired by. The end product was the first Cardiff dialect poem ever written called, ‘Nevuh Fuhget Yuh Kaairdiff’.

Realising that very few people would understand a full-on Cardiff dialect poem I decided to evolve a poetry that used working-class Cardiff rhythms and speech patterns without having to write in dialect. I still wrote outside of that form occasionally, as certain poems demanded, but generally I became more and more at home with it. It was syllabic with a peculiar love of alliteration and a good deal of humour.

As someone who left school at sixteen, went to work in a factory and then did a number of manual jobs including a lot of roofing, I slowly became aware of how unusual I was in the world of poetry. Most poems about working-class life were written by middle-class poets who may have had a working-class upbringing but had very little experience of adult working-class life, work or sensibility.

At best you would have a nice visual description of a building site or a dole queue usually written from a distance. You never got to feel what it was like to be that person either emotionally or physically. When I started writing about such things I realised I had very little poetical precedent and so I chose to write in a simple no nonsense style that wouldn’t alienate me from my subject matter. I also chose to focus mainly on the kinetic and narrative elements of the poetry. These factors eventually merged happily with the Cardiff idiom to produce most of the poetry in this book.

A month after my first major collection came out, desperate for some sort of response, I pestered Peter Finch, the manager of Oriel bookshop and all-knowing in these areas, about what, if anything, people thought of it? He reluctantly let on that there was a suggestion that I had been ‘aping Welsh-language poetry’. Knowing nothing about Welsh-language poetry I asked what he meant? He pointed me to the introduction by Anthony Conran in The Penguin Book of Welsh Verse. I was amazed to find that these Welsh-language poets wrote syllabically and rhymed along the line alliteratively. Not only had they ripped me off but they had the cheek to have done so over a thousand years before I was born!

I soon realized the obvious, that even Cardiff, in its working-class areas (because they weren’t educated to speak ‘properly’), still retained some of its Welsh language speech patterns. That in spite of that awful period between 1914 and 1964 when, in a mere 50 years, Welsh speakers declined by 40% and the Welsh language suffered a kind of linguicide, traces of it would be left behind even in Cardiff. Like a glacier moving back across the landscape, leaving its mark in valleys and ridges so that, though it is no longer there, its effect is undeniable. This kindled an interest in Welsh-language poetry and then Welsh history that has greatly strengthened my own Welshness.

From the beginning I was encouraged to perform my work. The idea that language is a thing of sound and closer to music than to writing seemed only too apparent. Having started out as a writer of text, the secondary medium of language, I found this difficult at first. Most poetry came to me from books and, being shy, getting up in front of an audience was extremely nerve-racking. Being in a group of poets/writers performing their work greatly helped me. Being one of many meant that if I didn’t go down well then the whole night wasn’t ruined. Just having to do a few minutes also helped take the pressure off.

The best thing about being in a group was seeing the varied ways other, better readers handled an audience. I learned a great deal from my fellow performers and overcame my shyness to the point where I started to actually enjoy reading my poetry and stories in public. I also started publishing small magazines and pamphlets. I didn’t just want to be a performance poet, I wanted my poetry to work on the page as well, even though these two areas of poetry pulled in opposite directions. Part of the challenge was to make them work in both areas though I’m aware that I often veered one way or the other. It is a challenge I am still working on. 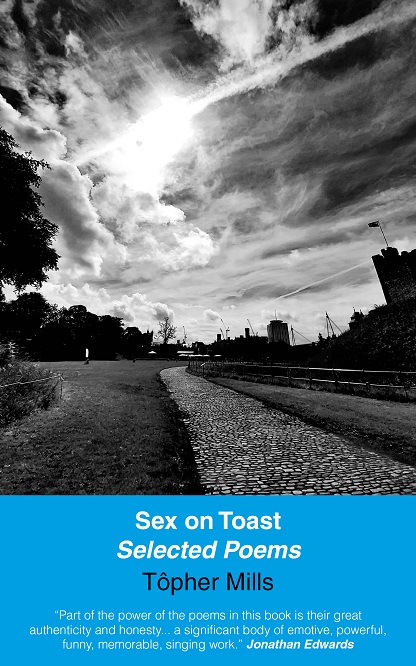 The poems in Sex on Toast are chosen from forty years of work. They are roughly in chronological order of writing, and I mean very roughly. The first section, Early Life, has new and old poems in it, but all about childhood. The second section, Early Work, has the earliest poems I wrote with one or two exceptions that ended up in the next few sections. In other words I have tried to put together a collection that flows and gives some idea of how my poetry has developed so far and, though my path does occasionally seem haphazard to say the least, I see this as a blessing not a curse.

The entertainer Ken Dodd once asked me, very seriously, ‘What is Poetry?’ The best answer I have been able to come up with, and this is just my definition, is that poetry is the sound and meaning of language combined in such a way as to transcend both.

Sex on Toast will be published by Parthian next month and you can pre-order a copy here.

This is Nation.Cymru at its best. Wonderful article. Diolch!