Wales has one again been put front and centre in the US thanks to Lord of the Rings: The Rings of Power star Morfydd Clark’s appearance on a leading late night talk show.

Further to the ongoing exploits of Rob McElhenney and Ryan Reynolds on US TV, Clark was appearing on The Late Show with Stephen Colbert, when she was asked by Colbert to perform her ‘little trick’.

The host, a self-confessed fan of Lord of the Rings, was left impressed when Morfydd, who grew up in Penarth, taught him the Welsh alphabet when they had met when Colbert hosted a launch for the TV series which premiered on Amazon Prime on the weekend.

The talk show host said: “Your little trick is, and I can’t believe how entertaining it is, but it really is. The Welsh alphabet,” before asking her to show him.

Morfydd replied: “Of course, my pleasure,” before the audience applauded her and Colbert assured them, “you don’t want to miss any of this.”

The Lord of the Rings: The Rings of Power is set thousands of years before J.R.R Tolkien’s ‘The Hobbit’ and is based on the author’s history of Middle Earth.

The series has a strong Welsh cast, with Owain Arthur and Trystan Gravelle, while Morfydd Clark appears in the series as a young Galadriel, an Elven warrior.

The Lord of the Rings: The Rings of Power star Morfydd Clark has said that she is “proud” her ability to speak Welsh influenced her portrayal of her bilingual character.

The actress from Penarth, a former pupil at Ysgol Gymraeg Bro Morgannwg, said that her character Galadriel would think and dream in Elvish and doing the same in the Welsh language meant that she had a better grasp of what her character was going through.

Morfydd Clark stars alongside fellow Welsh actors Owain Arthur, Trystan Gravelle and Lloyd Owen in the series that was released on Friday.

She told Looper said that she had been excited to take on the role in the first place because she knew that Tolkien’s Elvish languages had been influenced by Welsh.

“I feel I can be much more romantic and deep in Welsh,” she said. “So that was really useful for me because I was thinking, ‘[What’s the] language of her heart? What language does she think in?

“‘And how much does she throw this in, and would, in times of rage, would Quenya come in?’

“So that was really useful. I felt so proud. It was really nice to have that connection to being bilingual while filming this.”

She added to the Prospector: “Well, I went to a Welsh language school and everything is taught in Welsh. Welsh is phonetic, so it’s great for people with dyslexia. I started learning English in the third year.

“What my Tolkien-obsessed mother was really proud of and passed on to us was that Tolkien was inspired by the Welsh. Oddly enough, his work was a badge of honor for me, because the Welsh are Welsh and obsessed with anything Welsh.

“Playing a bilingual character was great. Yes, I think it served me well.”

The Elvish languages of Sindarin and Quenya were influenced by Tolkien’s interests in Finnish and Welsh.

In “English and Welsh,” a speech he gave in Oxford, JRR Tolkien said that he had always been entranced by the Welsh language.

“I heard it coming out of the west,” he said. “It struck at me in the names on coal-trucks; and drawing nearer, it ﬂickered past on station-signs, a ﬂash of strange spelling and a hint of a language old and yet alive; even in an adeiladwyd 1887, ill-cut on a stone-slab, it pierced my linguistic heart.”

Tolkien was inspired more by the sounds of the Welsh language than any individual words. His influence has continued in the fantasy genre, particularly on character names.

One of the human characters in Lord of the Rings: The Rings of Power is called Bronwyn.

She told i-D that she struggled with dyslexia and ADHD growing up, and felt “overwhelmed” and “burnt out”.

“Luckily, I was sent to Welsh language school [where] the arts are so respected,” she says. “There’s a right to be a performer in Welsh language and in society, and I really wasn’t good at anything else, really couldn’t put my mind to anything.” 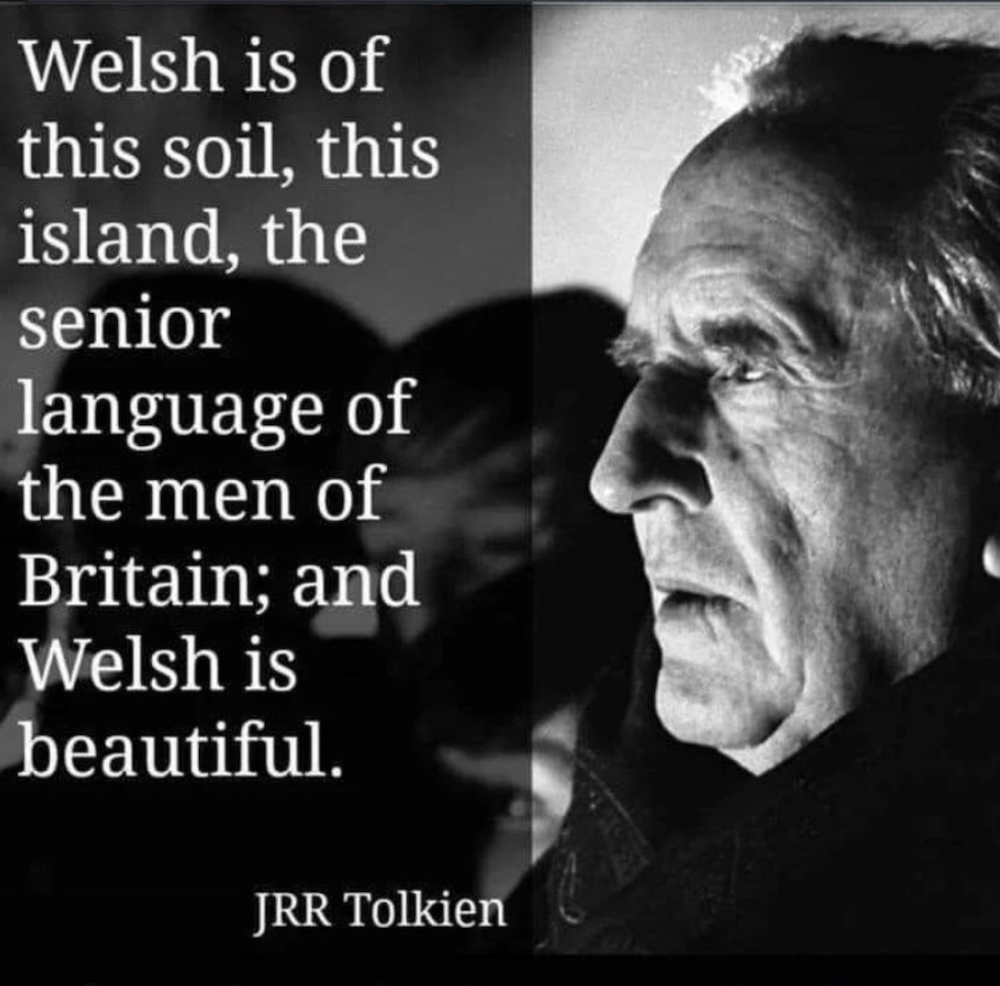 She went on to play the title role in Saunders Lewis’ play Blodeuwedd with Theatr Genedlaethol Cymru. She also appeared as Sister Clara in the Cardiff-made His Dark Materials for the BBC.

“I really do feel that I needed access to the arts, whether or not I became an actor,” she says. “[It’s] just this place where I could be myself, really… then it happened to work out.”

She had previously told the Hollywood Reporter that she had the Welsh language to thank for inspiring her to take us acting.

According to the magazine, she credited Wales’ “proud cultural heritage and huge focus on the arts” for her early inspiration, and her first experience came from taking part as a schoolgirl “in the annual Eisteddfod Welsh-language music and poetry competition and festival”.

“That set me up for it all,” she said. “But I really got into acting because I was really bad at schoolwork.”

Morfydd Clark also told S4C’s Heno that inspiration for the role had come from Welsh legend. She had acted in Blodeuwedd, a play based on Welsh mythology, and also reading the Mabinogion.

“What has really set me up for Lord of the Rings was doing Blodeuwedd with the Theatre Genedlaethol as that’s the kind of world and magic, so I’m reading a lot of the Mabinogi at the moment to kind of inspire me,” she said.

“I didn’t know how lucky I was when I was at school doing the Urdd and everything else. I had moved to London to do drama school and I realised, ‘oh, not everyone does this’. I was so lucky.

“And also as a Welsh person, I would have been part of the arts even if I hadn’t done it as a job.

“Coming from Wales, people tell you that you have the right to do these things, and I’m so lucky to have that.”

She had previously also said that having Welsh speakers on set had made her feel less homesick on the other side of the world.

“I’m very lucky there are two people in the cast and a costume designer who speak Welsh. But I am missing speaking Welsh,” she told WalesOnline.

“Being bilingual also helps in terms of learning lines and going to Welsh language school you do so much singing and reciting..

“As well as my dad singing Irish folk songs to us. It sets me up well for Shakespeare and stuff.”

She said that the fact that New Zealand looked like Wales had been helpful in that regard, too.

“It’s like Wales on steroids – it feels familiar but enormous. It has the dark green hills and grey sky, the Kyffin Williams colours, which I find very comforting,” she told i.

It’s good to see Morfydd Clark speak Cymraeg whilst educating Americans that Tolkien’s Lord of The Rings was in fact inspired by Welsh mythology, and how the Elfish language of Sindarin was based on our beautiful ancient language. But I often find there too many Welsh actors when they cross the pond sometimes talk Wales down, who for some reason become self-deprecating rather than educating ones unfamiliar with Wales or our culture whilst omitting our part in the creation of America itself seeing a large percentage of signatories of American Declaration of independence including Thomas Jefferson were either Welsh or… Read more »