Anti-lockdown demonstrators have been criticised for targeting the home of Welsh First Minister Mark Drakeford.

A crowd of around 150 gathered outside the politician’s private residence in a street near to the city centre with chants calling for him to be arrested.

Some reports suggest that those taking part included some wearing yellow star badges, similar to those Jewish people were forced to wear in Nazi Germany.

If you have political disagreements (and believe me @fmwales and I have many) then get involved in politics. Harassment is never acceptable.

Thoughts are with the First Minister and his family.

The Cardiff event was one of many similar rallies taking place across the UK in what was described as a ‘World Wide Rally for Freedom’.

Event organisers had distributed online notices calling for people to gather in Cardiff at 1 pm with further ‘details to be announced’.

One of the protesters posted a video update during the event which suggests their original plan was to head to the Senedd building in Cardiff Bay.

He said: “There has been another change of direction, to Mark Drakeford, First Minister of Wales – to his house.

“I was questioning it. Thinking should people go to the Senedd but obviously, there’s no one there anyway so maybe not. So they’ve trumped it – Mark Drakeford’s house. Beautiful.”

A photograph of the protest by one observer suggests around 150 protesters took part with a line of police guarding the front of the property.

Mark Drakeford has received continual attacks from sections of the media and anti-lockdown groups for his decisions during the pandemic.

Despite this, the First Minister’s popularity ratings have continued to rise with a poll earlier this year finding 57% of people in Wales believing him to be doing a good job – the highest rating of any UK leader.

The protest in Cardiff comes after five people were recently arrested as anti-lockdown protesters clashed with police near to Downing Street in London on what the UK Government had described as ‘Freedom Day’.

50 or 60 self centred scumbags targeting somebody’s private home. In this instance I find myself rooting for the virus

T’would be somewhat poetic were significant numbers of the morons involved to go on to develop a nasty case of Delta. But as most of them have probably not availed themselves of the vaccination, refuse to socially distance or wear a mask they will end up burdening the NHS, which means more pressure and unnecessary strain on healthcare workers.

Where I live, it was down to single figures, then the football began, people travelled and brought delta back, now it’s rising all the time. This is a serious challenge for democracy. They should be able to neglect the mask, but they
must not mix with others, and must use self service etc? Very tricky stuff.
Any sensible ideas?

Stupid wankers. Seriouly death and stupidity go hand in hand. Everybody else knows you are dead, apart from you, same goes for being stupid.And stupidity these days is as much of a pandemic as covid

Not often I find myself agreeing with you but you’ve hit the nail on the head with this one.

Oh I’m pretty sure we have enough home grown idiots who don’t understand what’s going on. The tales I’ve heard from my son about anti-lockdown warriors in the supermarket where he works would have you laughing with disbelief. As regards the 50 or 60 on this March, one can only guess they went to Mark Drakeford’s house because there wasn’t a Spoons near the Senedd

To be fair, there is a Spoons near the Senedd. It’s a bit dearer than the ones in town, mind you.

It looks like planned. “Let’s go to FM’s house, instead”. Manipulation?

The Darwin effect is clearly not acting fast enough, would anyone notice a difference if these people were lobotomized, or is it the case that they have been already. Lobotomized by the Murdoch media

They are annoying, but lobotomy was actually used by the Nazis. Perspective, please.

Lobotomy is actually still used in British medicine too

I find it fascinating that these people want me and her indoors to wear an armband signifying that we are “vulnerable” when there is a perfectly reasonable existing Nazi black triangle we could wear.

ooo poor little things…….. They have no self control and can only see their own selfish point of view and think they know more than virologists. If they had had their way there would be many thousands more dead and maimed in our country. Well done Mr Drakeford and thank you for guiding is through this awful pandemic.

And not a single Welsh accent amongst them….

Referencing apartheid of Jewish people by Nazis is disgraceful behavior, and turning up on mass at a normal house because of who lives there is also poor.

Their protest seemed to be against vaccine passports (Drakeford said it’s not happening) and involved singing “we are the 99%” when in reality they are amongst the 10% of adults in Wales who haven’t been vaccinated.

How do you protect people from conspiracy theorists, bad scientists and attention seekers without the misstep of saying only get information from the government? Perhaps we need a greater focus on critical thinking in schools?

“We are the 99%” at a meander attended by less than 100 people?
Yerrrrrs, maths not their strong point either then eh?

Mark Drakeford is a hero who deserves our every respect for his courageous leadership that has saved many lives during this pandemic.

I would like to know what these so-called protesters have contributed to Wales…..

“There’s a pro-death, pro-covid protest going on in Cardiff now.” 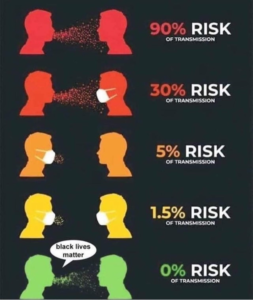 Oh look children, a fash has escaped from the zoo… 🤦

I’d be surprised if they know what day it is

…and at the same time the rest of us should have the right to deny them access to treatment should they go down with it.

But… but… but… “it’s just a cold”… so why would you want treatment for it? Better to leave it for those who feel they need it, no? Or are you such a snowflake you usually take up a hospital bed when you have a “sniffle” lol?

Utterly marvellous that my comment so touched a nerve with you that you couldn’t let it pass without repeating it back parrot fashion… oh how I’ve laughed!!! ❄️❄️❄️🤣🤣🤣

One says he is rooting for the virus and the other wants to question political views before treatment. No laughing matter. He zapped you fair and square.

Dishonour to them. Demonstrate yes, regardless what for. But don’t attack someone’s HOME. Drakeford and other targets of their spleen are constantly in meetings at publicly known locations. Not hard to look up where, and organise a demo outside. They would squeal murder if a gang targeted their homes.

Despite screaming that Covid is “just a cold”, most of them are so nesh they have a tantrum if you suggest they should therefore forego expert medical care and/or hospitalisation should they fall ill with “just a cold”. 🤣🤣🤣🤣🤣

On the bright side, ARTD knows how many rs in harassment

There is never a good reason to try to intimidate those we disagree with. I am not the greatest fan of Mr Drakeford but he has worked carefully to try to protect the people of Wales from Covid-19. I also support the right to protest. However to go to the private residence of ANY politician and prevent them and their family from enjoying their right to privacy and the sanctuary of their home is despicable. This sort of behaviour gives those in the Westminster Government who wish to curtail the freedom to demonstrate more reason to press on with their… Read more »

I see nothing wrong with peaceful protest

How about a health risking noisy March down residential streets to intimidate somebody at home? Whilst wearing symbols used by nazis in order to try and draw a false correlation with not wanting to wear a mask and mass genocide?

Mark Drakeford must be grieving the recent loss of his mother – morons all ?

With people fully vaccinated and most other countries now opening their borders, the lockdown restrictions in Wales make it look like it’s in the developing world

Plenty of brainwashed plums in here ripe for farming by the corporate Pharmaceuticals and funded Politicians.

Watch Dopesick then Crime of the Century HBO documentary and you might start to put 2 and 2 together.