A ‘clickbait’ survey claiming Cardiff is the least safe city in the United Kingdom has prompted a fierce debate on crime.

A public relations company commissioned a survey asking 2,000 residents of the country’s 15 biggest cities how safe they felt where they live, including 133 people in Cardiff.

The survey was commissioned to promote a new crime drama television programme, and led to several newspaper headlines claiming Cardiff was the “UK’s most dangerous city”.

Respondents were asked to rate how safe they felt on a scale of zero to 10, with 133 Cardiff residents giving a score on average of 6.9, below the national average score of 7.4.

Opposition councillors in Cardiff said these figures showed “something has seriously gone wrong with our city”, while Labour councillors slammed the survey as “clickbait news” and insisted Cardiff is safe, in an hour-long row at a council meeting on Thursday, October 21.

Liberal Democrat Councillor Joe Carter said: “I used to view Cardiff as a relatively safe city. I was never naive to think we were a village where you could leave your doors wide open, but the crime I used to see was fairly low level. Something has gone seriously wrong with our city over the last four years.

“It’s not just me who thinks this, a recent poll of 15 major UK cities rated Cardiff the least safe place to live.”

He added: “Drug crime is up, county lines are bringing gangs into our communities exploiting the vulnerable, bringing misery and destroying lives. And then they fall out, and start stabbing each other. This spring in Llanedeyrn, we had two stabbings in a month, both suspected to be gang related, and this happened within 200 metres of a primary school.

“Not long after that a group of men were spotted brandishing machetes near my local leisure centre, around 3pm in the afternoon. Police were out in force, helicopters in the sky, armed police were everywhere, and local schools were told not to let their children leave for almost two hours.

“Whether Cardiff deserves the title of the least safe city in the UK is debatable. Maybe in terms of recorded crime figures some areas have got more crime. But this is about people’s perceptions, based on what they see around them and what they feel. People are scared and we have a duty to make our city safer.”

Tory Cllr Mia Rees said: “The survey shows people are concerned about crime in our city. Those concerns are legitimate and I’m not surprised due to the number of high profile cases we’ve had. Just reading my WalesOnline alerts is enough to frighten anyone. 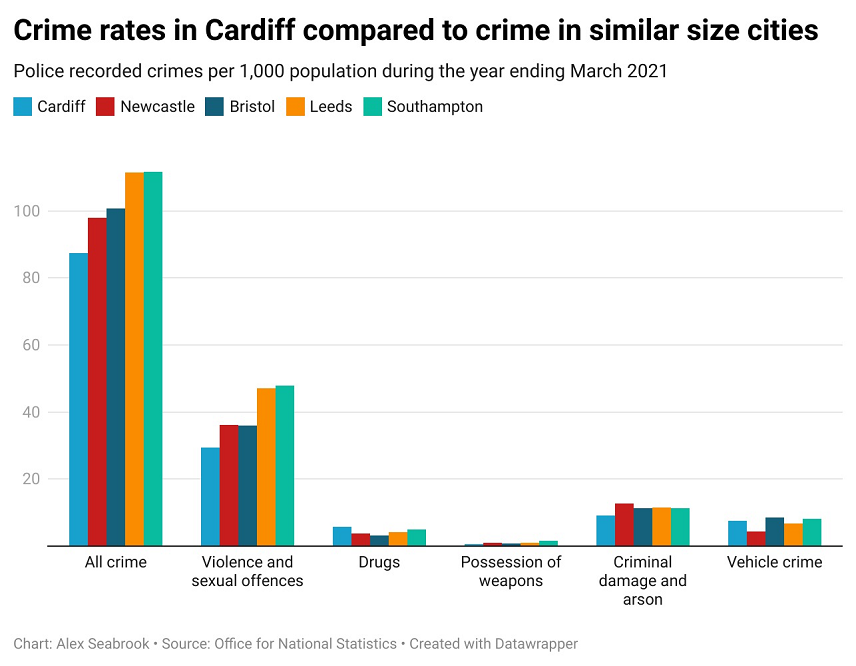 The survey was conducted by OnePoll, who describe themselves as “pioneers in the public relations survey, originally a tool to secure column inches in national newspapers”. The results were published on several news websites including the Sun, the Mirror, and the Express, which also gave details of the television programme the survey was promoting.

Labour councillors questioned the “incorrect” statistics and pointed to other surveys which suggested Cardiff has a relatively low crime rate and most people feel safe living in the city. Grangetown councillors even recently carried out their own survey of local residents, surveying more people living in Grangetown than the public relations poll did in Cardiff.

Labour Cllr Lynda Thorne, cabinet member for housing and communities, said: “Community safety has been a top priority for successive Labour administrations and remains at the forefront of our policy programme. Despite the measures introduced in recent years, we appreciate that some people still feel unsafe in certain situations.

“But we have a responsibility to support people and help them feel safe as they go about their daily lives, rather than making ill-judged statements using flawed statistics to secure party political advantage. There is little substance in these claims. Cardiff has the second lowest crime rate of any UK core city, and the lowest rate of violent crime of any core city.

“In a national survey for Wales, Cardiff’s score for people feeling safe at home, walking in their local area and while travelling, is commensurate with the national average. It is impossible to support a motion that has little or no basis in fact.”

Fellow Labour Cllr Ashley Lister added: “I’m disappointed we’ve had a motion brought based on incorrect statistics, which are completely not factual. The survey is clickbait news, with 2,000 people surveyed. Reflective of the population? I think not.

“My ward colleagues and I undertook a survey earlier this year in Grangetown, and there were probably more respondents to that survey than there were [in Cardiff] to this survey being referenced. Over the 170 respondents, the majority of them felt either very safe or safe, or indifferent.

“A lot of that has to be attributed to the work of our local fantastic police officers and council officers who do work in our communities to tackle crime and anti-social behaviour. We have some fantastic work going on with youth services, and in Grangetown youth services are training up young people to become youth workers.”

According to police data collected by the Office for National Statistics, Cardiff saw a smaller crime rate last year than cities of similar size like Newcastle, Bristol, Leeds and Southampton. That includes fewer crimes per 1,000 population relating to possessing weapons, criminal damage and arson, and violence and sexual offences.

However, Cardiff did see the highest rate of drug crimes compared to those four cities, and more vehicle crime than Newcastle and Leeds, although less than Bristol and Southampton. This ONS data looks at the number of crimes recorded by the police, and not the public perception of crime and safety, so cannot be directly compared to the OnePoll survey.

OnePoll’s front webpage states, “We don’t just post your questions. We design them. As a full service agency, we create bespoke solutions to all your PR, marketing and market research needs.” That suggests strongly that polls commissioned from them are deliberately biased to meet a specific PR requirement. Although Joe Carter may like things to be otherwise, the poll does not rate Cardiff as the least safe place to live. It rates Cardiff as below average in terms of perceived safety. For overall safety, https://www.thecompleteuniversityguide.co.uk/student-advice/where-to-study/how-safe-is-your-city#EnglandandWales ranks Cardiff as fourteenth out of thirty six E&W university cities, perceivably better than average.… Read more »

The Tories in Wales never let facts get in the way of running down our country, they must be seen as pandering to their masters in London, it is part of why they exist. Homicides in the UK 2019/20. London 130, N/W Eng 114, E Eng 100, S/E Eng 83, The whole of Wales 30. Figures are quoted from the Statista web site.

Nothing more than tory HQ driven fake news. They’ve been found out on similar shenanigans elsewhere during elections. This one probably came straight from the ‘Union unit’