A tidal lagoon in Swansea Bay with floating houses and a floating solar farm is “of great interest,” a senior Conservative MP has said.

The council is keen to see the proposal taken forward, although there is no firm project on the table as yet. It would need  need planning permission and an operating permit, among other consents.

Monmouth MP Mr Davies made the comment during a Welsh Affairs Committee hearing about renewable energy and carbon emission targets.

He had been asked by Gower AM Tonia Antoniazzi about the previous Swansea Bay tidal lagoon project, which didn’t get built because ministers felt it was too costly to back.

Mr Davies recalled that the developers of that project, under questioning from him and Labour MP Rachel Reeves, had said they were seeking a much higher level of subsidy than the figure that had previously been disclosed.

He also said he had concerns about the developers’ links to a quarry where the rock for the lagoon wall was going to come from.

“Both I and Rachel Reeves had very grave concerns, but that’s not to say the principle is wrong,” said Mr Davies.

“Both myself and the Secretary of State have met with Swansea Council to discuss the Dragon Energy Island scheme which, I think, is a very positive development – and I’m very confident in the abilities of the Labour council, who have some great people, and the scheme put forward is one of great interest.”

The Government wants to reduce carbon emissions by 78% by 2035, compared to 1990 levels, requiring changes to industry, the transport sector and how houses are heated.

“I mean, basically, a lot of those (industrial) jobs are going to go under the Government’s plans, right?” asked Mr Crabb, MP for Presili Pembrokeshire.

Mr Davies replied: “Well, there certainly will be massive changes, but I think what we will see is not jobs going, but jobs changing as well.”

He cited floating offshore wind proposals off the coast of Pembrokeshire, the potential for steel production to become less carbon-intensive, and work happening at a site in Cwmbran to develop hydrogen-powered vehicles.

Mr Crabb asked the two Government representatives if they were “absolutely confident” that plans were in place to deliver such a rapid and ambitious transition.

Mr Davies replied: “Well, I think you’re right, the plans are ambitious. They are achievable but there will certainly be consequences.

“I think we have to accept that the public want us to be ambitious about cutting carbon emissions.”

He added: “But I don’t accept that that’s going to lead to job losses. I think there’s going to be job changes.”

The DEI project is a game changer for wales. The international DST consortium has the resources to deliver it… All that is needed is the political will to get it done.

The Image used is very old & incorrect… please use the one done by the project visionary Malcolm Copson of MOI Imagineering, Hong Kong. 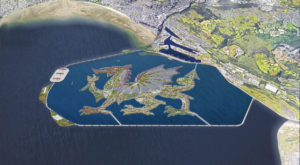 Sorry but I doubt this idea will work. The whole point of this project is to generate and sell electricity. Building an artificial land of this scale will cost far too much money and will take away a lot of the water capacity needed to generate decent power for the country. If this did happen it’ll turn into another Cardiff Bay. A lot of the area will still be under developed decades on. Another prime example of this is Dubai. It should only be used for what it’s intended. Build a small number of shops and cafes along the footpath,… Read more »