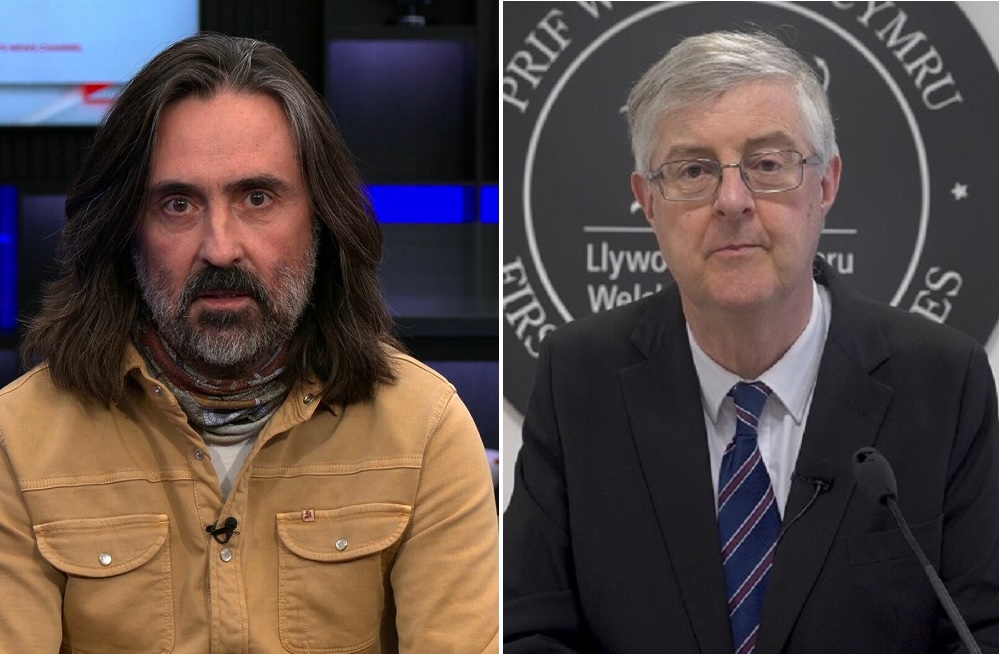 A GB News presenter has said that Wales is a “one party state” and accused the First Minister Mark Drakeford of talking “balderdash-on-steroids”.

Neil Oliver, a long-time opponent of Covid measures who presents a weekly current affairs and interview programme on the channel, hit out at Wales’ Covid restrictions which he claimed had made the situation worse rather than better.

Writing in The Times he said that both Wales and Scotland’s lockdowns had been more “draconian” than England, despite earlier comparing Boris Johnson and Ker Starmer to Tweedledum and Tweedledee.

So far in the UK, there have been over 154,000 deaths involving Covid, with 9,307 of those in Wales. Mark Drakeford said this week that he had followed the scientific advice on restrictions throughout the pandemic, and was loosening them as ONS data and case rates showed that Wales was past the peak.

But Neil Oliver wrote: “It would hardly be fair to lampoon only Johnson and Starmer — especially in the face of the policy balderdash-on-steroids waved around in the one-party states that are the private fiefdoms of Scotland and Wales.

“First ministers Nicola Sturgeon and Mark Drakeford have likewise outdone themselves in making their respective bad situations infinitely worse than they need have been.

“I have no doubt that lockdowns and the rest have done more damage, of almost every conceivable sort, than anything inflicted by Covid itself.

“The evidence of the inappropriateness of lockdown was there long ago, for anyone with half an eye, and yet both Sturgeon and Drakeford ground forward stubbornly with enforced closures and the rest, and on an even more draconian scale, than anything applied in England.”

On Friday Mark Drakeford had claimed that the real reason the UK Government was dropping restrictions more quickly in England than Wales was to distract from the “awful mess that it finds itself in”, according to Mark Drakeford.

During an interview with Naga Munchetty on BBC Breakfast, the Welsh First Minister took aim at Boris Johnson’s regime for not “following the science” and for trying to “grab headlines” with its approach to the pandemic.

The comments come amid a turbulent period for the UK Prime Minister, with calls for him to resign, amid reports of boozy parties being held in Downing Street during lockdown, a defection of an MP from the Conservatives to Labour, and allegations that Tory MPs have been “blackmailed” into dropping their opposition to UK Government policies.

The Welsh Government announced a phased easing of restrictions on Thursday, with a gradual retun to alert level zero by January 28.

This contrasts with a much faster dropping of restrictions in England, where policies such as mandatory face coverings in public places and Covid passports have been scrapped.

Mark Drakeford was asked during the interview on BBC Breakfast why he had not followed the approach taken in England.

Naga Munchetty said: “I’m sure many people in Wales will be looking to restrictions that have been eased in England and thinking, why are we not there? Why are we not at that stage if we’re hearing, the same, a similar message from the UK Government that looks after the rules in England that numbers are coming down, hospital admissions, the pressure is easing on the NHS?”

Mark Drakeford said: “Well we’ve always taken a different approach in Wales, one that does things step by step, in line with the science.

“We’re a government that doesn’t need to grab headlines to distract attention from the difficulties that we would be in if we were in the same position as the government of England and I think people in Wales have demonstrated their support for that more cautious, more step by step approach because it has kept Wales safe, and it’s kept Wales open.”

The English right-wing and nationalists have been lining up their minions for some time now. They are worried about Cymru, they do not want us to be free and they do not want us to be able to choose our own government because the governments we have chosen do not act in the interests of the English nationalists and The Establishment system they are part of. We must stand strong and united, not fall for their tricks and tactics, remain focused on our communities and our counties and our country. Resist the English nationalists, we only have to look at… Read more »

Oliver, is a Brit Nat Scotsman, he’s not very popular wherever he crops up, he appears to be anti everything but mostly pro right wing.

Doing some research, I would call him a fascist

They are not worried at all. They want the jobs for the Red wallareas.

What jobs are those then. Low paid.

Dodgy ones in free ports where companies launder money for criminals!

Do you mean their pork-barrel projects?
They’ll never deliver any real change, just reward their cronies who were already living there.

Welsh Left and Right unite and fight, but remember to campaign right now and onward. The worst thing we can do is be so over confident that the vote turn-out stays around 40%. What we need is at least 60%, so we should push our youth and poor to get out and vote, tactically and smart. Yes Cymru!

I wish the right wing media God speed with their messaging because it only strengthens the true voice of our wonderful country #IndyWales needs these people attacking our choices and telling us we are too stupid to run our own lives.

I’d like to inform Mr. Oliver that this is not a one-party state; there is an opposition party, but they seem to have moved away from scrutiny of Welsh Government policy to telling us how wonderful life would be if we only did as Westminster tells us. I actually think Gwlad (if they had any MS’s) would make a far more credible opposition party in the Senedd because they would be likely to challenge the WG purely within a Welsh context.

And we are not supposed to call people thick anymore?!

BritNat Anglophile Scot Neil Oliver besides being finished as a serous history presenter, now has zero credibility. And as much as I wish there were Nationalist Welsh Government in office including a large Plaid Cymru contingent at Westminster fighting for our interests. The fact is. At least we have a proportional system for our Senedd Cymru, unlike Westminster. And Wales votes Labour because the people choose to do so. It’s not forced on them like the two party state at Westminster that bounces back & forth between two parties with no chance of smaller parties ever getting elected let alone… Read more »

Labour at Westminster get just under 3 years to the tories ten in power since it’s birth in 1905, they play the Tory game and will not consider PR. What do tories fear the Most? PR. Let’s hope Labour do not win a majority in the next election as it will certainly be the status quo under Starmer

I think poor old Neil Oliver is the David Icke of our times. I’m surprised he didn’t say Drakeford was secretly a lizard beneath his skin.

But so many of ’em seem from the planet ZOG?

Kind of a ‘pop’ historian. More of a documentary presenter than anything else.

He’s on GB News. How much further into obscurity do you think he can fall?

Put your dog whistle away Oliver and start thinking like the Celt you profess to be.
Even if Wales were a ‘one party state’, it would be because that’s what the voters have voted for, not because the present adminiustration has rigged the system or supressed the oposition.
Go back to history, leave the future to those who can envision a better one.

He is about as Celtic as Farage! Whatever the hell he is?

Neil Oliver is a bitter Unionist apologist, who dreams of a ‘One Nation’ government operating out of Downing Street. GB News, along with the other rightist media outlets, are staunchly anti-Celt, and really look down their noses at Wales in particular.

Wow, a Scottish hating Scottish Britnat uses the victorian age word “Balderdash”. Stick to despising your own country instead of smearing your toxicity onto us. I don’t think that a-hole understands democracy because he is attacking democracy while being a royalist lickspittle. I watched 30 mins of that trash channel last night and the only opinion you get from them is their opinion and it looks like advertisers have left them in droves. Being a hate filled far right channel isn’t going to get people watching. By the way, we have more parties to vote for than their 2 party… Read more »

Nice hair Neil.
You must have been gutted to lose out on the Head and Shoulders ads.

I think he sold out.

UK government – Yesss, at least we are not as draconian as the Welsh and Scottish governments and have put the economy first ! Err..sorry for your loss…..

I thought he looked familiar…never liked him…

The strange thing is that I always gave him credit that he was one of the very, very few presenters that bothered to make the effort pronounce Welsh place names correctly and I presumed he was a Scots Nat respecting our language.

As nutty as he looks.

Try Finland vs Sweden for one!

England is also a one party state, as is Scotland. Says more about the electoral system than Labour!

Don’t be so hard on the lad. He has probably run out of history style TV jobs as there are lots of smart female presenters who speak good English to choose from now. So reading the right wing bigot script must be his way of trying to pay the rent. He will not last long as the Hard Right GB news viewers will probably soon be complaining about the difficulty of understanding what he says and asking why are they employing an economic migrant. Such a sad case.

Who Neil Oliver? This sad twerp wastes his time ranting on to four people and a puzzled dog.

So sad when folk who are experts in one small though important area of life suddenly start pontificating in huge ranges of subjects they know very little.

Whether it’s people like David Starkly an interesting and informed historian sharing his unfortunate views of the Nazi genocide or indeed Neil on politics of a country he has little idea about.

I fear we may be seeing another David Ike emerging ?

Who exactly IS this person??

Despite it making my blood boil, I police GB News for anti Celtic hatred. It’s alright though because I don’t generally have to watch for more than a couple of minutes before I hear some. It generally comes in the form of disparaging remarks about the DEMOCRATICALLY ELECTED leaders of Scotland and Wales, ‘Sturgeon’ and ‘Drakeford’, sneeringly referred to only by their surnames whilst referencing Johnson as ‘Boris’ Neil Olivers’ ‘one party state’ and ‘fiefdom’ comments (I had to look up fiefdom) represent the desperate and outlandish angry lashings of a diminishing and dying tinpot empire. This 80 seat Tory… Read more »