Guardian criticised for including Welsh map in ‘England’s origin’ story 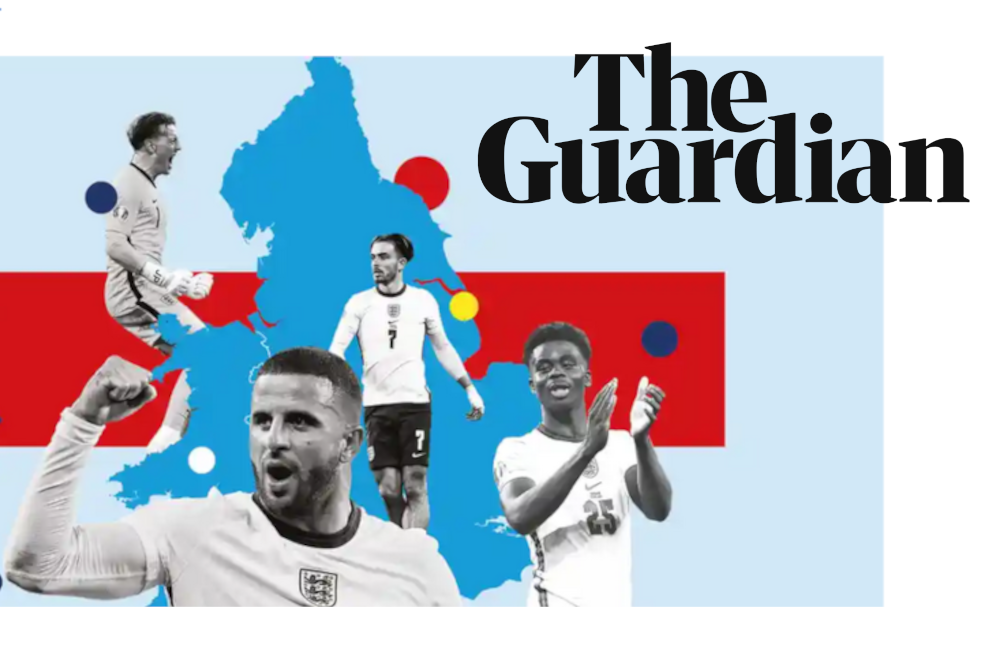 The use of a Welsh map to depict a story about the origins of the English football squad has provoked a puzzled response.

The Guardian newspaper feature is headed, “England’s origin stories: this is where football came home from’, with a graphic of England and Wales as the backdrop, while Scotland has been removed.

The article lists each squad member and pinpoints the English location that each player comes from – none are listed as having a Welsh hometown.

The nearest to Wales is defender Tyrone Mings whose home town is listed as Bath, around 22 miles from the border.

The confusing graphic was highlighted by @evans_tomos on Twitter:

One commenter jokingly suggests the map must be sourced from the period when Wales was still assimilated into the Kingdom of England.

Another responds by saying that the frequency of these kinds of mix-ups makes it hard to believe that they happen by accident.

UK media outlets have faced constant criticisms over various misleading and often inaccurate ways in which the UK map is used.

In 2018, the BBC had to completely redesign its weather map after receiving complaints from Scottish viewers that the nation was depicted much smaller than it actually was.

Newspaper of middle class academic white libs which believes itself the voice of the left wing in the “UK” talks bs. Is this news?

Said it before and I’ll say it again, as “UK” newspapers go, there is only one which is truly left wing… and it ain’t establishment newssheets (hint: it’s owned by its readers).

I am not surprised so many people have no idea what is the difference between England and rest of the UK. Often it seems they don’t want to know.

With a simple web search plenty of outline images of England only turn up.

As yet again, the English trying to hang onto something that never was and never will be. This story highlights the racist neighbour that Cymru still has to endure.

As a Welshmen shaking his head this is another recently and growing racism by the english towards the britons/welsh giving fuel to those who believe Wales should be an independent country.

The Picture Desk at The Guardian does not represent all 50m+ English. Welsh Nationalism really is a mind-rotting drug.

No it isn’t. What that map represents is another example of the ‘For Wales see England’ syndrome. Far too many in England can’t recognise that Wales is its own country and a separate entity to England and would prefer it if we simply ceased to exist or got assimilated into England. After all, you don’t want the inconvenience of a different language and culture existing on your doorstep do you? That is why that map is offensive. Perhaps from now on we’ll refer to the whole of the United Kingdom as “Wales” and represent it with a map of Wales… Read more »

Why are you so obsessed with soccer and England?

How can you expect them to get a map right when their heads are up their own ar**s most of the time ?

It was predicted, if memory serves, that this sort of thing would happen after Brexit.
It was not predicted that England’s “progressive” media would join in: Lebensraum.

What’s that got to do with this map? That was then, this is now.

Just shows how even the critics get it wrong. UK map means United Kingdom.
So where is isles of Scilly , Channel Islands, Isle of Man.