House prices in Cardiff grew twice as fast as wages in the past 15 years with the average home now costing more than £235,000.

About 8,000 people are currently on the waiting list for social housing in Cardiff, and demand is increasing.

A major council house-building programme is underway in the city, with Cardiff council planning to build 4,000 homes over the next few years.

But the latest data on house prices and wages show that for many, owning your own home is an increasingly expensive challenge.

New data revealing the scale of the housing crisis in Cardiff was published as part of the council’s local development plan annual monitoring report. 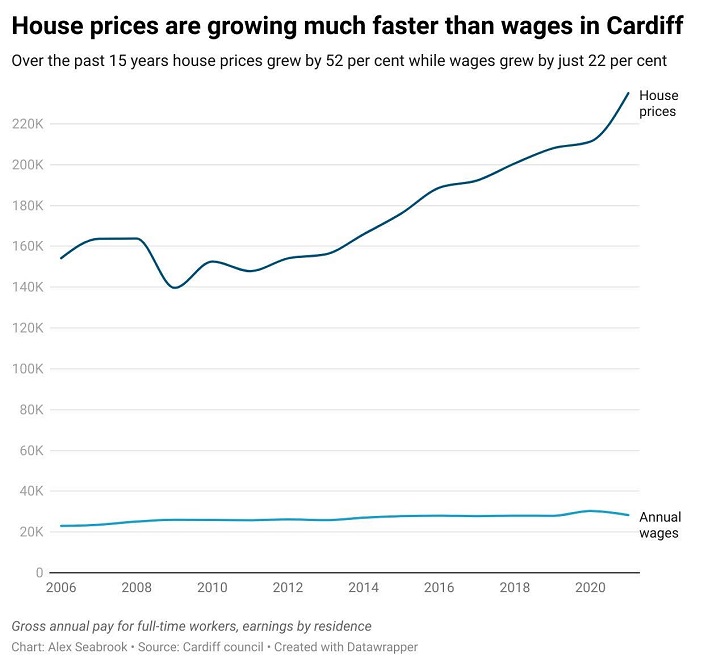 According to that report, average annual wages in Cardiff in 2006 were £22,994, compared to £28,267 this year. While that’s an increase of 22.9 per cent in cash terms, wages have actually decreased by 16.9 per cent in real terms, when adjusting for inflation.

About 8,000 people are currently on the council’s housing waiting list, and each month another 400 people apply for housing. But only 1,600 council and housing association homes become available each year, leaving many waiting for a long time.

Council bosses said they were working on a “huge and historic” house-building programme  of 4,000 homes. 600 have already been built since 2019. More than half of the homes will be available as social rents directly from the council, with the rest sold on the market at “affordable prices” or sold via a shared equity assisted home ownership scheme.

The latest figures in the annual monitoring report were “positive” according to Councillor Caro Wild, cabinet member for strategic planning and transport, who said thousands of new jobs had been created in the past five years. He added targets for affordable housing were also being met, in large part due to controversial building on farmland on the city’s outskirts.

During a cabinet meeting on Thursday, October 14, he said: “Overall the findings of the fifth annual monitoring report are positive. Employment figures are looking really healthy and the monitoring data shows continued strong performance, with the number of jobs steadily increasing. In particular since 2016–17 there has been a net 9,000 jobs created in the city.

“The local development plan is not the driver for that, but it certainly shows that the plan for our space and where we’re looking to put things in the city does appear to be working.

“The other big thing is housing. It looks like around 18,000 or 19,000 since the start of the plan in 2006. But really importantly, affordable housing is also being provided at a steady rate. The percentage target we have for affordable houses on the local development plan sites are broadly being met. The really interesting thing is just how important those greenfield developments are in ensuring affordable housing numbers.” 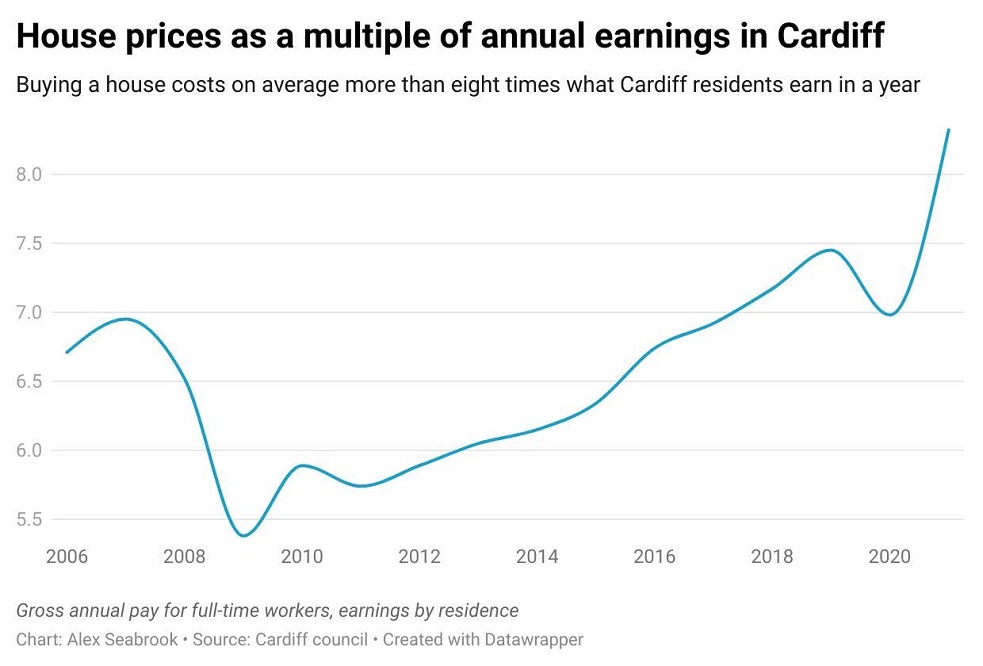 But questions were raised about what ‘affordable housing’ actually means. The answer is not particularly clear.

Cllr Emma Sandrey, deputy leader of the Liberal Democrat group, said: “The average house price in this city has gone up by £24,000 in the last 12 months, so we have to be very careful about what we mean by ‘affordable’. Because every year what is affordable and what isn’t is changing quite rapidly, and definitely much quicker than we can keep up with in terms of building affordable houses.”

And according to the council’s housing strategy, affordable housing is either ‘social rented housing’ with rents linked to Welsh Government’s guidelines and benchmark rents; or ‘intermediate housing’ where costs are higher than social housing but less than market prices or rents, and capped at local housing benefits.

Another issue is property developers are usually asked to pay towards providing affordable housing, but often pay much less than requested or even nothing at all. One example is last year developers building luxury apartments in an “exclusive gated community” in Pontcanna claimed they would not make enough profit if they contributed to affordable housing, so they paid nothing.

The Cathedral Gardens development, on the corner of Cathedral Road and Talbot Street, should have meant developers paying the council £535,920 for affordable housing, as well as £112,740 towards other benefits for local infrastructure. Instead, they paid just £12,000 for parking restrictions. A marketing slogan on hoarding around the development now boasts: “Green with envy.”

Utterly disgusting that developers should be allowed to avoid their Section 106 obligations. Excuses such as not being able to make sufficient profit should be disallowed, the fact that the profit motive is even a thing is bad enough, but clearly any socialism within the Labour controlling group is a very pale pink wash. Just as horrendous is that ‘exclusive’ gated communities even get planning consent from the ostensibly Labour controlled council. At some point economic collapse will cause the bottom to fall out of the property market as the system is simply unsustainable. Then people might tumble to the… Read more »