A Conservative MP has said that the M4 and A55 are “pan-UK” roads and therefore should be overseen by Westminster.

Mark Fletcher, the MP for Bolsover, said that the roads in Wales should be managed in the same way as the Trans-European Transport Network, which is technically and financially managed by the European Commission.

The M4 and A55 are currently controlled by the Welsh Government, who decided in 2019 not to go ahead with an M4 relief road in the face of opposition from the UK Government.

Speaking in the House of Commons today, Mark Fletcher asked the Welsh Secretary Simon Hart whether the change of ownership could go ahead.

“The Secretary of State will know that certain roads, such as the M4 and the A55 in north Wales, connect our great Union and are therefore the property of the whole Union,” he said.

“Does he agree that these roads should be treated as pan-UK roads and should be overseen in a similar way to how the European Union oversees the trans-European transport network?”

Simon Hart said that the Conservative MP had made a “good point”.

“He will have heard me refer to the M4 on many occasions as a vital asset that joins the European mainland to the Republic of Ireland,” he said.

“It is not just a Welsh road; it is of economic significance to the UK and more widely, and it plays a strategic role.

“That, combined with the slightly mysterious position that the Welsh Government have adopted on a moratorium on road building, leads me to the conclusion that he has reached, which is that there are better ways of maintaining and improving the UK-wide network, including roads that are exclusively in Wales.”

In November the UK Government revealed a plan to focus on cross-border transport links between Wales and England. The Union Connectivity Review by  Sir Peter Hendy was a means of “binding” the UK together according to UK Transport Secretary Grant Shapps.

He said that Transport was key to “binding the family of nations that is the United Kingdom closer together”.

“It is not good enough that certain areas of the UK thrive while others fall behind. We must realise our full national potential and that means mobilising the resources and skills of all parts of this country,” he said.

“I am indebted to Sir Peter for his work. We will consider his recommendations carefully, engage closely with the devolved administrations, and work collegiately to ensure these proposals strengthen the ties that bind us, now and for the future.”

The Union Connectivity Review proposes major overhauls of the transport connections across the north and south of Wales and England. Branded ‘UKNET’, the finished network would see “a strategic transport network for the whole of the United Kingdom”.

Specifically, in Wales the plan will aim to bring about fast journey times across the border on the A55 and M4, faster journey times from England across the South Wales and North Wales main lines and rail links from the English Midlands to Cardiff.

there in lies the problem, there is no motorway solely in Wales despite us being in this so called glorious Union for centuries #toryscum #indywales 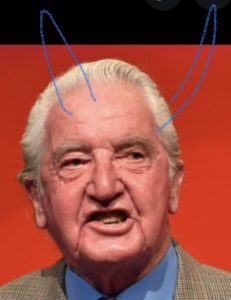 …oh .and so the north and south Wales railway lines are pan UK routes and therefore deserve equal consideration to HS2!

Indy curious yet? Imagine still being a Tory, in Wales, in 2022, the shame…

I wonder what prompted a question from a ‘not in Wales mp’. A WhatsApp prompt from head office? A personal appeal from our sneering English supremacist colonial governor? Does he get brownie points for his ‘glorious union’, ‘Wales has no voice’ position? The faces these colonialists will make after the union falls apart will be wonderful to behold.

Who knows what prompts these insane things the Tories are coming out with on a daily basis. They are all joining Boris’s comedy club one by one.

The “Welsh” ones are running out of steam, so they are calling their masters to the gas pump.

Another Tory comes out in favour of Welsh independence. He must be because  the European Union oversees the trans-European transport network between separate sovereign states.
Though why on earth an EU hating Brexiteer is so keen to emulate the EU is another question.

As we have already said Mr Fletcher: No!

The point that Mark Fletcher, Simon Hart, Grant Shapps and others are making is that very few things are ‘Welsh-only’, and therefore devolution is extremely limited in practice. Independence, of course, would be a completely different matter and the prospect of us moving towards that point is precisely what London is trying to avoid through this strategy of talking down our political and economic powers, and their reach. The plan is that enough people in Wales will be convinced that they have to maintain the umbilical cord to the Motherland, so that we either continue with a limited form of… Read more »

How about the Senedd taking over the M25 you twerp?

There is perhaps some interesting information to mine from all these Tory attacks on Wales. Previously we had a senior Tory MP who admitted on camera that he no idea that Dover was a key trading port between the UK and the EU. Now we see that the Tories have learned that the A55 and the M4 (partly) connect England to Ireland through Wales. They have yet to understand the geography of HS2, but that might well happen in a few years. Basically they have learned where Wales is and who it is Governed by and they hate what they… Read more »

Did he really admit that? Well, the Irish were quick off the mark building those Brexit-buster boats which we could rent a container or two on, as we might see
quite a few tail-backs soon?

Try taking this attitude to the Scots regarding the A1

Yet another attack on the Welsh government. Clearly they are softening us up for an outright assault on devolution. Of course they won’t use a referendum for this as they know they’ll lose.

Unless Labour voters wake up AND STOP VOTING FOR LABOUR AND SWITCH THEIR ALLEGIANCE TO PLAID then Welsh devolution is finished.

So are UK waters, but I don’t see Tory Mark Fletcher or Simon Hart allowing French fisherman the ability to freely fish in our waters without a licence or quota post-Brext. Oh no.. Also, it’s been well over two years since pathological liar Boris Johnson stated like an overgrown Silverback Gorilla during a visit to Newport how he was to “unblock the Dragon’s nostrils ” with the Brynglas Tunnels. And since that tub-thumping Unionist claptrap by Boris, nothing has been done. No plans drawn up. No money announced. Nothing. And seeing the rail electrification in Leeds was scrapped recently, another… Read more »

Keep it please, we want more of this talk, every little helps on the road to independence