Swansea’s network of cycle and shared-use paths could grow exponentially, and council chiefs are keen to hear the public’s views on the idea.

The authority is consulting on a draft active travel network map for the county, which could lead to more space being dedicated to cyclists and walkers.

From Pontarddulais in the north, Mumbles in the south, Birchgrove in the east and Llanrhidian in the west, a spider’s web of dotted orange and blue lines appear on the map indicating potential future routes.

Nothing is set in stone though at this stage.

Swansea already has 70-plus miles of cycle and shared-use paths, and goes through an annual cycle of bidding for Welsh Government active travel grants and expanding the network as funds allow.

The council has secured £3.2million this year for new routes and feasibility work for others.

Morriston, Penlan and Penderry are some of the areas which could see a significant growth in active travel provision, according to the draft map.

Penderry councillor June Burtonshaw said she backed the concept. “It’s exercise, it keeps cars off the road, it’s environmentally-friendly – I would support it,” she said.

Another potential route through a busy commercial and residential area of Swansea is from Sketty, down through Sketty Cross, Uplands, along Walter Road and into the city centre.

Martha Llewellyn, of Square Peg Coffee House, Sketty Cross, said she was in favour of such a route, partly as cyclists sometimes used the pavements. “I think that would be a great idea,” she said.

A member of staff at Uplands Launderette, Uplands Crescent, agreed. “A lot of cyclists find the road unsafe because of all the lorries, buses and vans,” he said. But he also felt the council should improve parking provision for shoppers and workers in Uplands. 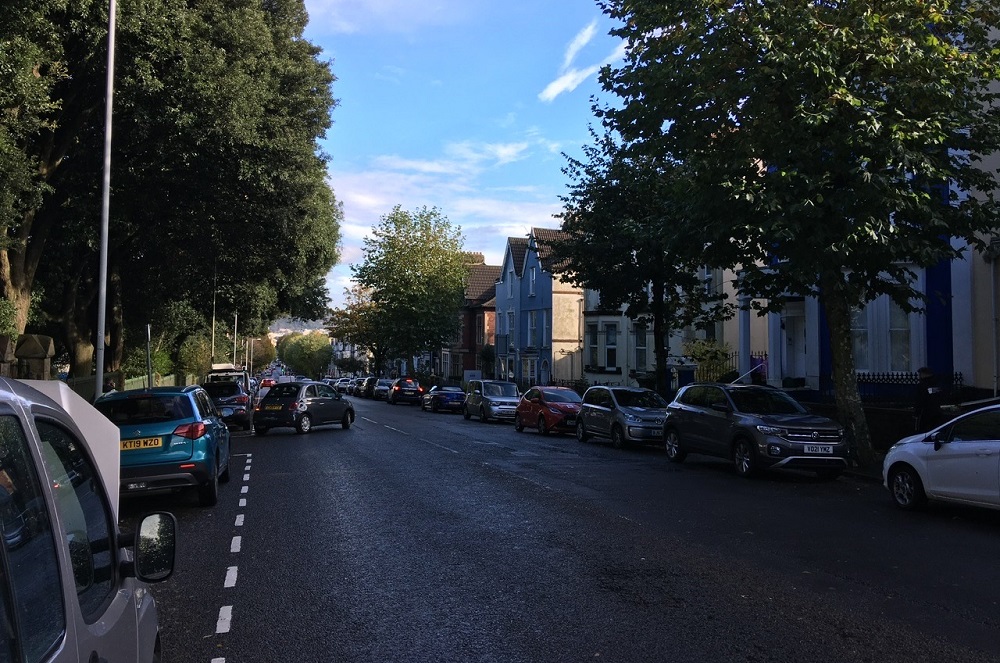 Walter Road, one of the many potential new cycle or shared-use routes in Swansea (pic by Richard Youle).‘Knocked down’

Vince Rawlings, of Cartridge World, Walter Road, however disagreed strongly with any cycle or shared-use path outside.

“The road is not wide enough to make it wider for cyclists,” he said.

Mr Rawlings added that sections of the pavement were half-owned by owners of commercial properties. He said he couldn’t see how cycle provision could be achieved without removing parking on Walter Road. He felt a lane running parallel to and south of Walter Road was more appropriate for cyclists to use.

He said he had nothing against cyclists, but said he’d had several misses on the pavement.

“They come blasting down the pavement – I’ve almost been knocked down over,” said Mr Rawlings. He felt a shared-use path would encourage cyclists to “fly down”.

The council said the draft map has been shaped in part by public feedback. The current consultation asks people what potential new routes should have the highest priority, how the network overall could be improved, and whether the draft map would encourage them to walk and cycle more.

“These proposals are all about creating off-road links between communities, inspiring people to enjoy time out and about and re-discovering hidden green gems,” said a council spokesman.

“Our existing routes came into their own during the pandemic when they were used by people for their daily exercise and our ambition is to promote greater use in the future.

“It’s a great way for people to leave their cars at home, protect the environment and look after their health.”

The consultation runs until November 15.

“Only after that will we start looking at the detail of future routes which we’ll be developing in collaboration with residents,” said the council spokesman.

“For example, they’ll look at whether they will be for walking, cycling or both and whether they are shared or segregated.”

Swansea Bay cycle campaign group Wheelrights said it will submit a detailed response to the draft map, and has drawn up a shortlist of new routes it considered priorities.

They include a new route along Culfor Road, between Gowerton and Loughor, Cwm Level Road through to Clase – passing the DVLA and Bishop Vaughan Catholic School – Sketty Cross to Walter Road, and Gower College Swansea’s Tycoch campus to the shared-use paths at Singleton Park.

Wheelrights secretary Dareyoush Rassi said segregated cycling paths were preferable where possible, but he recognised that in many situations this may not be practical and other solutions may be more appropriate.

“We therefore recommend that decisions are made on a case by case basis after careful consideration of the needs of all road users including pedestrians, individuals with mobility issues etc,” he said.

The rapid growth of electric, or e-bikes, may accelerate the interest in more active travel routes.

“At moment 70% of the bikes we sell are e-bikes,” said a member of staff at Giant Store Swansea, Llansamlet.

“It’s for all age groups, 18 upwards. The beauty of them is that you can put in as much power or as little effort as you like.”

Shared pedestrian/cyclist paths are a nightmare. I have been hit once and had many near misses because selfish cyclists are more intent on overtaking each other than leaving safe space for pedestrians. Add skateboarders weaving unpredictably all over the place and it is horrendous! I do at times walk along the coast to Mumbles in one direction and the Marina in the other, but the experience is highly stressful, not at all enjoyable and I do not feel safe. The more of these shared routes are imposed on us, the less likely I will be to leave my home, which… Read more »

j humphrys
Reply to  What Ismyname

Sadly agree, even worse are the electric scooters, mostly manned by young adults.
Only answer would be fenced paths, seeing as the police are seldom to be seen now.

Why waste the money? Most cyclists are too arrogant to use designated cycle routes, can’t tell you how many times I’ve had to overtake on Oystermouth road because they’re too professional to use the parallel cycle lanes that are provided for them. Dunvant to Gowerton is another favoured place for cyclists to ignore the track and create an obstruction on the bumpy, windy road of motorists instead. I agree it’s important to make these places safer, though it’s proven to be a complete waste of money for most cyclists as they don’t share that same empathy of making it safer… Read more »

I have to say that these moaning walkers are completely out of touch and are going to be very disappointed. We have to reduce car use and encourage cycling and use of alternative modes of transport. The shared paths are exactly that, shared. I bet these future fearing moaners didn’t share their toys as youngsters either.