News in brief: Delyn MP dubbed a ‘clear and present danger to staff’ as he prepares for Westminster return

The Labour Party’s Deputy Leader Angela Rayner has described shamed MP Rob Roberts as a “clear and present danger to staff” and demanded that he stays away from Parliament.

Her comments on Twitter come as Mr Roberts prepares to return to the House of Commons today after serving a six-week suspension over a sexual misconduct ruling.

The MP for Delyn confirmed to the Daily Mirror that he intended to return to Parliament physically rather virtually this afternoon and denied reports that he was advised to stay away from Westminster by the Conservative Party after the whip was removed following the guilty verdict.

Stay away from Parliament Rob Roberts.

You are a clear and present danger to staff, you should not be an MP for another day longer.https://t.co/O76GS9mX9H

Mr Roberts was banned for six weeks after Westminster’s Independent Expert Panel found he had breached Parliament’s sexual misconduct policy after investigating a complaint made by the MP’s male former senior parliamentary assistant.

Suspensions of more than 10 days usually trigger a recall petition and potentially a by-election if it is signed by enough voters in the constituency.

However, the panel that looked at the Roberts case was set up only last year, and the legislation covering recall rules was not amended to cover it.

The UK Government has been urged to introduce emergency legislation to close a loophole that is preventing a by-election in the seat.

A female former parliamentary intern, who Mr Roberts propositioned in a series of text messages last year, says she will also make a formal complaint to Westminster’s Independent Complaints and Grievance Scheme if he refuses to step down.

Shadow Leader of the Commons Thangam Debbonaire said: “Most people found to have sexually harassed their staff like Rob Roberts has been, would expect to lose their job.

“Because of a procedural anomaly, Rob Roberts’ constituents are not able to decide whether or not they want him to represent them anymore.

“The Tory Party has failed to deal with their MP’s behaviour and now we hear they are still propping him up.

“I’ve proposed a change which could sort this. The government could and should grant time for a debate and a vote.

“They cannot and will not say why they don’t believe this loophole should be fixed to ensure Rob Roberts’ constituents get to decide if they want him to lose his job. Yet again, it’s one rule for them and another for everyone else.”

A spokesperson on behalf of the Whips Office said: “Rob Roberts now sits as an independent MP and his actions are his own.”

There has been one further death due to Covid and 1,135 new cases of the virus, according to today’s bulletin from Public Health Wales.

The newly recorded death was in the Aneurin Bevan Vale health board area and takes the total number of deaths since the start of the pandemic in Wales to 5,581.

Cardiff (165) reported the highest number of new cases in the last 24 hours, followed by Bridgend (88) and Denbighshire (66).

The 4,581 positive tests for coronavirus in the seven days up to 9 July is the highest since the week ending 24 January when 5,631 new cases were reported.

A Conservative councillor from Wrexham, who has been criticised for working in Panama and carrying out his council duties remotely, has resigned.

Andrew Atkinson, Wrexham Council’s lead member for children’s services, has recently been working and attending meetings from Central America and told the Local Democracy Reporting Service he was in the country with his family on a “working holiday” ahead of emigrating there permanently at a future date.

Mr Atkinson’s decision to quit was announced during and Executive Board meeting yesterday and will take effect from the 31 August.

In a statement, Mr Atkinson thanked members of the council for their “professionalism and dedication” and said it had been a “privilege to work with them”.

Cllr Atkinson previously stood for the Conservatives at the 2015 and 2017 UK general elections, finishing second to Labour’s Ian Lucas on both occasions.

He also ran for the Welsh Senedd in 2016, where he was beaten by Labour rival Lesley Griffiths, before being elected as a councillor in Gresford the following year. 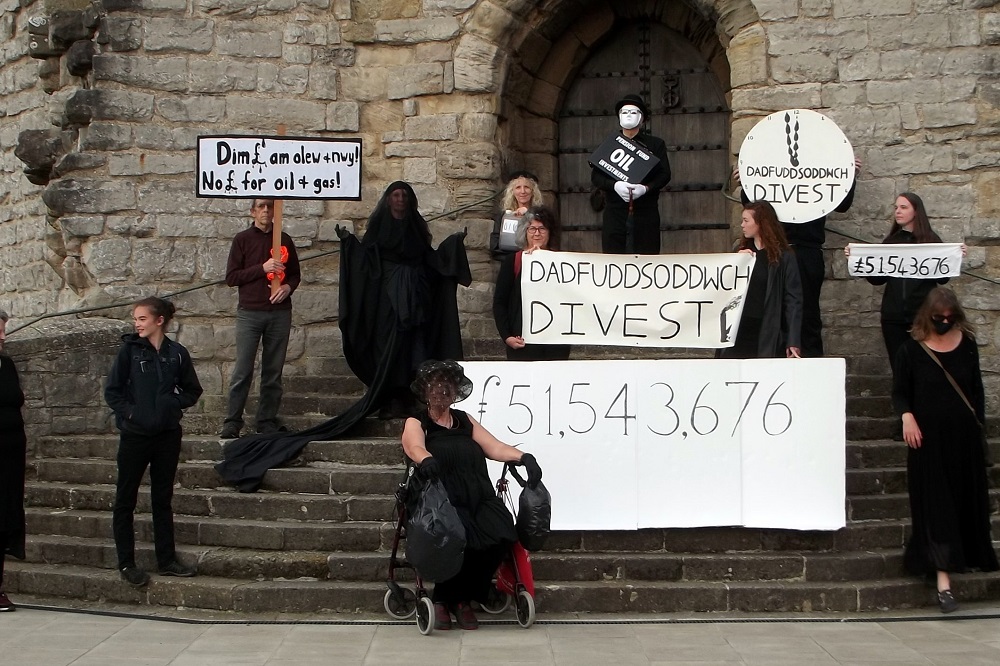 Campaigners have called on a multi-billion-pound pension fund to withdraw its investments from coal, oil and gas companies amid claims that time is running out due to the climate emergency.

A demonstration was held in Caernarfon by members of Divest Gwynedd, which says that over £50m is currently invested in fossil fuels while urging “decisive action and a published timetable for divestment.”

After Gwynedd Council declared a climate emergency in 2019, a decision was made to transfer 12% of the pension fund into low-carbon investments via the BlackRock World Low Carbon equity fund.

This particular fund seeks to invest in green infrastructure projects, such as renewable energy, alternative fuels and clean technology, looking to optimise returns as well as “delivering positive environmental outcomes”.

But according to campaigners, while there has been a reduction over recent years, more action is needed.

Draped in black costumes, signifying the role of oil and gas in global deaths due to climate change and a clock representing time running out, Monday saw the group deliver a letter claiming that fund managers are not acting quickly enough.

A spokesperson said:  “Unfortunately, acting fast is precisely what they are not doing.

“They are risking people’s pensions by potentially creating stranded assets. They could be looking at opportunities to invest in renewable energy projects in Wales.

“Current scientific assessments suggest that if we are to stand a chance of staying below two degrees of global warming, we must stop burning fossil fuels as soon as possible and certainly not explore for more.

“The catastrophic future consequences of continuing to use these fuels will lead to an increasing number of extreme weather events directly attributable to climate change, such as the recent record breaking heatwave in Canada which resulted in hundreds of deaths.”

Another member added: “There are clear environmental and social non-financial reasons to divest.

“Many other local authority and other pension funds have committed to divestment. All have a fiduciary duty to their members, so why can’t Gwynedd?” 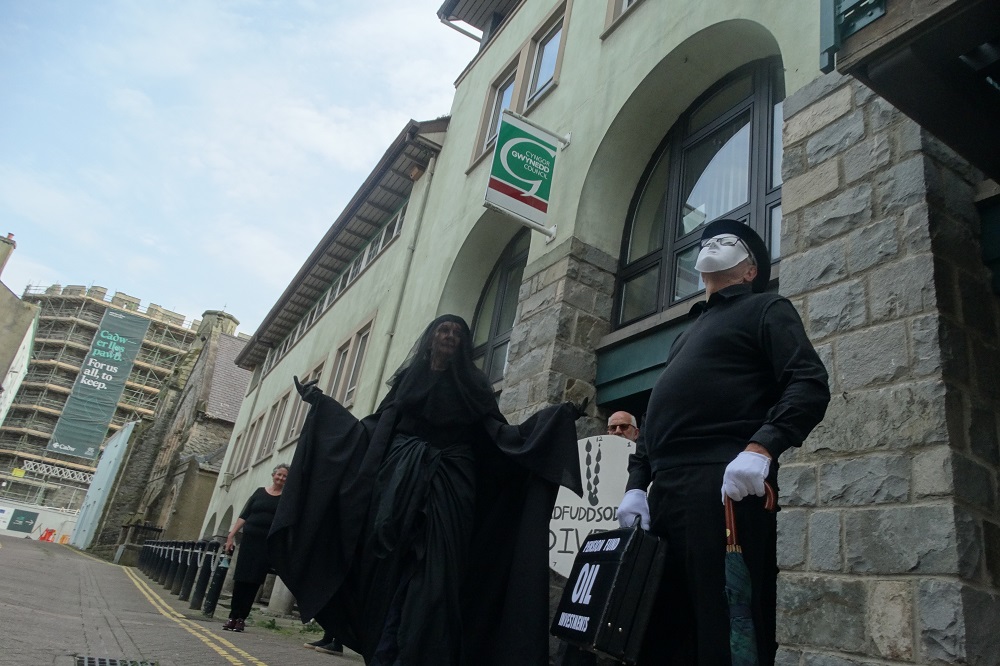 According to the fund, “significant steps” have already been taken with Russell Investments – the Wales Pension Partnership’s management solutions provider –  and other partners declaring that they want to achieve a standard of net-zero carbon emissions in their investment portfolios globally by 2050.

Other highlighted measures include:

“Decisions to invest or not in a particular company or type of asset will be based on the ability to generate sustainable long term returns for the fund, and this will be influenced by the approach a company takes to climate change.

“Gwynedd’s Pensions Committee are aware of the potential risks and are seeking to ensure that the Fund is invested in companies which are diversifying their businesses towards renewable sources of energy, so that they are less exposed to oil and gas in future. e.g.in the Wales Pension Partnership’s Global Opportunities decarbonisation strategy, the Fund already excludes thermal coal producers based on stranded asset risk.”

They added: “As active long-term asset owners Gwynedd Pension Fund believes that engagement is more effective tool divestment, and we regularly challenge our asset managers on their progress on environmental, social and governance issues.

“Divestment from fossil fuels needs to be considered in the round as part of an overall strategy to reduce carbon emissions across all sectors.

“As an individual pension fund and nationally as part of the Wales Pension Partnership (WPP) we have a common goal of investing locally, and nationally in Wales in renewable projects.

“We are considering investing in renewable and community projects across Wales, subject to satisfactory due diligence.”