Plaid Cymru’s campaign during the 2021 Senedd election was an “embarrassment” according to one of Wales’ leading political academics.

Richard Wyn Jones, the Director of Cardiff University’s Wales Governance Centre, said that Plaid Cymru was “no closer” to understanding how to win votes from Labour than they were 10 years ago.

Writing in the Welsh language current affairs magazine Barn, he added that the party’s tendency to overhype their own electoral hopes had been “insanely foolish”. The full article can be read in Welsh here.

Richard Wyn Jones called on the party’s supporters to acknowledge an “obvious truth, that Plaid Cymru’s national campaign in the 2021 election has been an embarrassment and a mess”.

Plaid Cymru had a series of unconnected local campaigns which once again failed to realise that their best hope of gaining ground was on the list and that they should encourage Labour voters to lend them their second, regional vote, he said.

“If there was more effort in this direction then it may be that Carrie Harper would now be a Member of Parliament and Plaid Cymru opening an exciting new chapter in its history in the north-east,” he said.

“This was also another election when Plaid Cymru failed to manage expectations,” he added, saying that “overhyping electoral hopes have now developed into a sort of sickness within the Party”.

“The difference between Plaid Cymru and the Labour Party in this respect was illuminating: Labour knew long before 6 May that they wanted to overthrow Leanne Wood in the Rhondda and, indeed, thought it likely they would win very easily,” he said.

“However, it was only in the latter days of the campaign that information began to circulate widely in the political world. Labour knows there will be plenty of opportunity for celebration once the victory was sealed.”

In the article Richard Wyn Jones also said that there was “nothing inevitable about Plaid Cymru’s shortcomings” and that the party could take significant steps towards improving its results.

Among these were to improve the party’s election-winning machine and also to be honest about their own failings.

“In politics as in life in general, there is a natural tendency to respond to disappointment by being defensive,” he said.

“But in politics as in life in general, it is also important that we are prepared to ask hard questions about how we dealt with those things that are within our control and which could or should have been foreseen. The experience of the last decade suggests that Plaid Cymru struggles to do that.

“So the first step in restoring Plaid Cymru’s organization – perhaps the most important step – is to conduct an honest internal review of what happened in the May election.

“Let’s not be naïve: many within the party would find it easier to avoid such a process as the results could be quite uncomfortable.

“However, if the party is not prepared to put its own internal procedures in order, then other elections will be followed by a host of articles discussing Labour’s success and Plaid Cymru’s disappointment.

“Of course, Labour will welcome that, but surely Plaid Cymru members and supporters are fed up?”

Plaid Cymru haven’t got a clue how to campaign over the long term. They don’t undertake local polls, canvess or collect local data and voting intentions beyond West Wales. Their structures are very much based on ideas promoted by staff at Central office in Cardiff and their National campaign is within a huge echo chamber. They love to s**g off Labour and the Tories – and accuse all non Plaid voters of being British – denying them of their Welshness. In order for Plaid to resurrect they should have an immediate strategy in place within the parliamentary constituency of Delyn,… Read more »

In my area the PC campaign was 1 billingual tiny card that was a mess in small print, I only read it as a supporter and it was about a list seat. Campain consisted of 1 photo with the candidate on his own holding up a leaflet, and another with a dozen in the car park holding up PC placards.

Looking at the Social media accounts of many PC candidates show very little work being done. There were half a dozen candidates who had excellent SM accounts and actively campaigned.

On the other hand when it came to the regional list seats Plaid went from one to two in south central, another seat was gained in the south east and held onto both seats in south west. It is very difficult to get three regional seats in a single region. 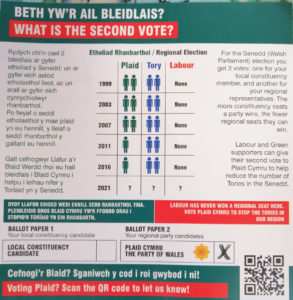 Plaid’s gains on the list wre because of the collapse of the Heinz 57 nutter parties on the right. They owed little to Plaid’s campaign and certainly should not be used as an excuse to paper over the cracks.

Don’t expect them to acknowledge their good fortune in picking up votes from the demise of UKIP et al. After all those ychafi people are “Fascists” and the ultra clean left credentials of Plaid would be sullied by association with such bad people !

Those votes went to the Tories.

Yes they did. But in a less crowded field the electoral system “rewarded” Plaid as the third party (and also probably got Jane Dodds elected for the libs). That’s why I think that those taking comfort from Plaid increasing their list seats are in something of a fool’s paradise.

In fairness and with the greatest of respect , this is the type of denial which Richard is referring to. The Rhondda, Llanelli and Conwy should now be with Plaid…….. at the very least!

Chris Franks, you need to stop with others in PC congratulating yourselves on tiny % increase in votes and shockingly poor election results if you want more PC voters more money from donors and more seats.

PC needs to do this: undertake local polls, canvass or collect local data and voting intentions beyond West Wales.

The idea of changing the party name to an English name has been mooted a number of times. The idea seems to be sacrilege to Plaid members/voters but they need to answer some questions. Do you want a Welsh national party in power in the Senedd ? PC has achieved virtually NOTHING in this regard in 100 years so when are you going to accept that the party needs DRASTIC change ? In spite of the excellent improvement in use and understanding of the language a large majority of Welsh people don’t speak or understand it so whatever message the… Read more »

As usual, Richard Wyn Jones’s analysis is spot on. If the Labour Party is a machine then Plaid looks Heath Robinson in comparison. Also, without ditching the party’s left of centre and green leaning politics, the party must make more of an appeal to those who are patriotic but are not looking for an ever more leftwards pitch. Frankly, there is not much vote winning ground to the left of a Mark Drakeford led Labour Party and there have to be policies that appeal to relatively socially and economically conservative voters on the left and centre ground. This combined with… Read more »

There is so much to be said on this matter but it is going to take a brave person to leave that room full of mirrors and tell it as it is…good luck with that! There is a hole in Plaid’s bucket that needs mending

Mirrors and echo chambers – just the kit that dreamers and fantasists enjoy playing with. It was evident from way back that the kind of nonsense that was featuring most commonly on Plaid’s major media appearances by its leadership figures was not going to gain traction. But they were so busy admiring their self image they didn’t ask what the electorate thought of them. This did a great disservice to the likes of C Harper, who should be sitting in the Senedd by now, and also highlights the weakness of picking favourites when hard core local reps are best selected… Read more »

I have been a Plaid supporter since I was seven (leafleting in the 59 election) the time before last my vote was stolen, this time I had strong reservations but still voted Plaid and would in all honesty vote for a sheepdog if it wore Plaid colours. I said to Mr LLwyd when he stepped down that I would miss him and by God I do!

Cytuno amser mawr! It’s almost criminal that Carrie Harper didn’t win the list. I like the idea of an unspoken pact between Plaid and Welsh Labour to encourage Labour voters to give their regional vote to PC.

Remember that billboard Plaid put up in Wrexham and she bragged about?
That’s why she’s not an MS.
She (and Plaid) had no automatic right to win, and some of the comments in this thread seem to think that Plaid would win just because they said they would.

They also need to realise that an election is won over 4 years not 4 weeks.

So true and so obvious.

I am always left with the impression that the Plaid hierarchy are quite happy with the status quo and the prospect of electoral success terrifies them.

A number of people have said that, and there may well be an element of truth in it. And at the risk of cynicism, it’s very cushy on the Opposition benches.

Best jobs in Cymru. Sat on one’s backside making pompous declarations no-one listens to. And trousering a half decent salary to boot ! Complacent contentment among a dozen or so politicians and their entourages. Luvly mun !

What’s significant is that, while the numbers of pro-indy supporters has risen, the Plaid vote did not match it. The strategy of appealing to some mythical metropolitan elite in Cardiff by pushing a woke agenda was never going to win them any new support in a region with real problems like the Valleys. In contrast, the reason Carrie Parker is a loss to the Senedd is because she and her local branch have done a lot to improve things in Wrexham Maelor even in the wards they don’t control. You have to start with local issues and build up.

The truth is that Plaid, deep down, doesn’t want to win. It is satisfied with the status quo. The top knobs get seats, and their mates get jobs on the gravy train.

They are lazy, and comfortable. That is the reality.

I would suggest that candidates need to be both long standing and active in or out of office. Further, people familiar with deep rooted campaigning in the “heartlands” need to be co-opted and their advice acted upon. I would also recommend a study of John Ball’s campaigning methods in 1970s Swansea. Finally our candidates need to resonate in their areas as they presently exist (including the choking Anglo-Americanism) and not as we might wish them to be.