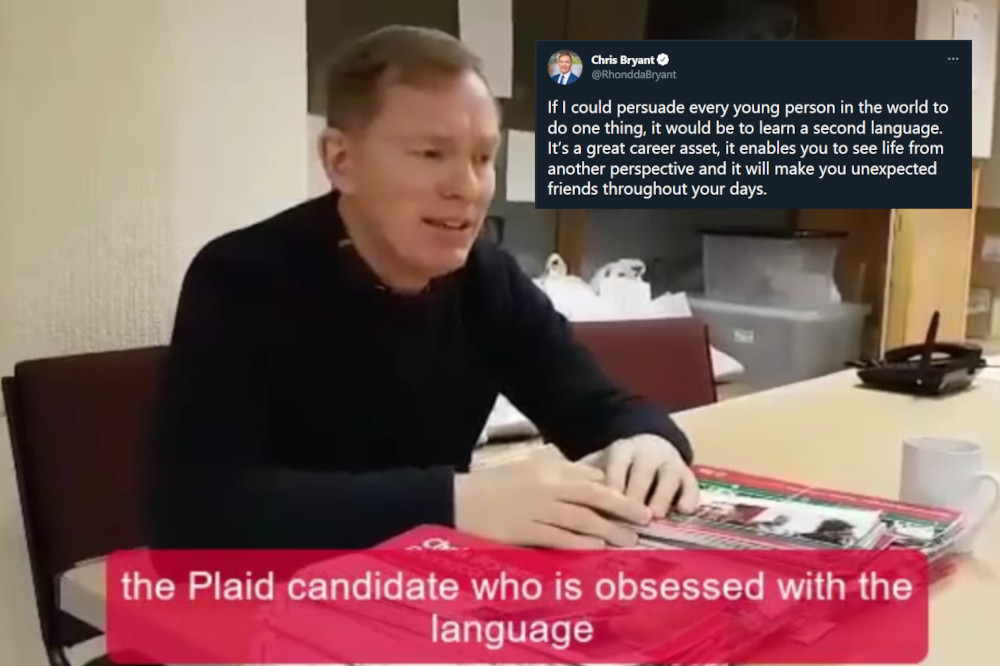 A Chris Bryant tweet promoting bilingualism has sparked questions about his past attitudes towards the Welsh language.

The Labour MP, who is a fluent Spanish speaker, sent out a message about the benefits of learning a second language and how it allows people to ‘see life from another perspective’.

While the general sentiment was overwhelmingly welcomed, questions were also raised about Chris Bryant’s previous opinions about the Welsh language.

A very good idea and suggestion. But it's a shame you used this very topic to create division not so long ago. I've no problem with promoting bilingualism, in fact I welcome it, but don't use the Welsh language as a political point scoring tool. It's worth more than that. https://t.co/r2dbB9obzt pic.twitter.com/JZaOzuNo8q

During the 2019 General Election campaign, Bryant posted a Facebook video in which he criticised the Plaid candidate, Branwen Cennard, as being ‘obsessed’ with the Welsh language.

He stated: “Here in the Rhondda of course it’s quite specifically about who do we want to be the MP for the Rhondda.

“Who will we have confidence in when they stand up in the chamber of the House of Commons and make that argument for the Rhondda?

“Is it going to be the Plaid candidate, who is obsessed with the language and with independence for Wales?”

He went on to win the Rhondda election with a majority of 11,400 – Branwen Cennard finished in third place, behind the Conservative candidate.

Chris Bryant later deleted the video after receiving criticism, particularly from Leanne Wood, for using the Welsh language as a ‘slur’ but declined to issue an apology. Welsh Labour said that he had ‘regretted’ the post.

This is so wise Chris. My language teacher friends are still disappointed by the Labour government’s ending of compulsory modern language GCSE in England in 2004. It led to a massive slump in the numbers taking languages. 🏴󠁧󠁢󠁷󠁬󠁳󠁿 🇪🇸🇫🇷 🇩🇪 https://t.co/T6QKjSME93

Despite the criticisms of his past attitudes, Chris Bryant has also spoken out in favour of the Welsh language. In 2016, he called for MPs to be allowed to speak Welsh during meetings of the Welsh grand committee.

Bryant is taking out Indy insurance. The behaviour of a true sycophant.

Narcissistic headline grabber. Total waste of space. His opinions may be O.K in Islington but no use here.

Uh ? Poverty not the issue here butt, it’s his attitude to language and other things Welsh.

As for poverty Wales will have its hands full sorting out our disadvantaged and getting them back on their feet. Islington is a short walk from the City of London where the coffers of the seriously privileged are housed. Arguable that Islington has a solution on its own doorstep !

I had the misfortune of bumping into this specimin at his local rugby club (Ferndale) a few years back. What horrible self opinionated arrogant guy. Everything that’s wrong with the Labour Party you can see within him. Not good.

Awful man. I had a difference of opinion on a matter and he blocked me on Facebook.

In the same vein as the Kinnocks, Kim Howells, Llew Smith, George Thomas, Leo Abse. Odious politicians lacking principles and for some unknown reason a vitriolic hatred of the language. Thankfully these old labour dinasours’ are on the way out. They are certainly out of step with with majority of Welsh citizens who want to live in a forward looking Wales.

I couldn’t agree more, though there are some current ones who also have tickets for the never-ending gravy train.

I’ve never lived in Chris Bryant’s constituency, but I once phoned his constituency office about a UK matter that falls within the remit of a parliamentary select committee that he sits on. His constituency admin person was thoroughly conscientious, making an effort to understand the problem and whether or not it was within the remit of that particular committee. But I never heard back from Chris Bryant himself, so I’ve got no way of knowing whether he disagreed that his select committee should be looking into it or he just couldn’t be bothered. Parliamentary select committees are essential in a… Read more »

So he thinks bilingualism is a good idea if one of the languages is Spanish but not if it is Welsh, very hypocritical and typical of so many anti-Welsh politicians.