“Do you know anything about Peruvian politics? Have you even been there?”

This is how Labour MP Chris Bryant responded when one Twitter user challenged his views on the recent Peruvian election.

The question addressed to Alan MacLeod who had reacted to Chris Bryant’s post stating: “Perú is a wonderful country but it’s depressing that voters were left with a choice between Fujimori and Castillo. Sadly the new cabinet looks set to take the country down a failed Marxist route.”

It prompted this bruising exchange: 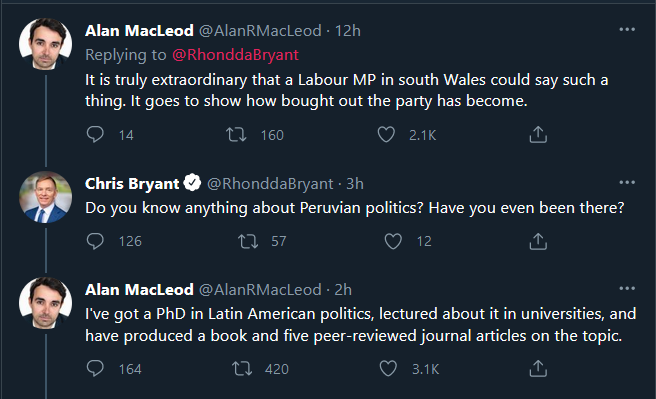 With an academic background in Latin American studies, Alan MacLeod is now a journalist, writer and recognised expert on politics and media reporting in the region.

Chris Bryant’s original post was referring to the recent election of Pedro Castillo as Peru’s president and his appointment of a left-wing lawmaker, Guido Bellido, as the country’s prime minister.

The make-up of the new cabinet has been criticised by many who were hoping for a more moderate and ‘centrist’ government.

Chris Bryant is a fluent Spanish speaker who has knowledge of Latin America after having travelled through the region and served as a Minister for Latin America.

Nye Bevan, Clement Atlee, Tony Benn et al. would all be spinning in their graves if they could see what Labour has become.

Can we have less about idiotic Bryant please? The man is a self publicising buffoon.

There’s no show without Punch.

Fluent in Spanish but couldn’t care less about Cymraeg

…and supported the Spanish fascist crackdown on Catalan democracy

Surely it is never a good idea to cast aspersions at strangers, you never know who you are talking to. Always play the ball not the man as they say. Sadly we live in a world were opinion is more important that knowledge and expertise is not recognised.

So, the Rhondda has a representative getting into Twitter spats about a country on the other side of the world. A representative who wanted to become a do-nothing speaker of the house. A representative who constantly weaponizes and undermines the native language, a language that was stolen from generations of people in the valleys, one making a welcome and highly supported reemergence. Maybe it would be better to have a glass of milk with a red rosette at this point. I hope Buffy Williams will do a better job; the valleys deserve a dedicated public servant, not a keyboard warrior.

Buffy will do a better job, and raise the bar a good bit in the process.

I do hope so – I get the sense that they need a good dose of localism there. I don;t think that mode works for every area, but decades of do-nothings or polemicists has left the place in need of a representative who can mirror the citizens’ gumption and drive.

” Chris Bryant is a fluent Spanish speaker who has knowledge of Latin America after having travelled through the region and served as a Minister for Latin America.” That may sound like a lot and probably enables him to babble away at the louche parties he frequents, but confronted by a real expert the b.s is revealed sharpish, or pronto as he might say. Yet another small reason why people of Rhondda have been short changed.

Given the rhondda’s noble and radical political traditions still struggle to understand how people there keep voting in the tory lite chris bryant but voted the principled socialist leanne wood out in May ☹️. Guess that’s what voting labour in Wales gets you!

The Labour vote in the valleys is an anti-Tory protest rather than an endorsement of socialism.

Lifelong Labour voters there had no qualms about switching to Ukip and voting for Brexit.

Hope that sinks-in to you guys who think the Cymro want socialism.
Please leave talk about it until After the liberation.

Is this the guy who posed in his underpants on a gay dating site?

Bryant proving once again that not all publicity is good publicity.
The Labour equivalent of ReTweet. Would best serve political discourse in Cymru by leaving it.

From Wikipedia : Bryant was privately educated at Cheltenham College before studying English at Mansfield College, Oxford.

Clearly a typical Rhondda man, it’s a shame that this British man parachuted into a Welsh valley constituency spends his time discussing South American politics and championing British Nationalism, instead of representing and promoting Wales and his region, which remains one of the most deprived areas in the whole of Europe.

“has travelled through the area”?

Well, that really qualifies him as an expert.