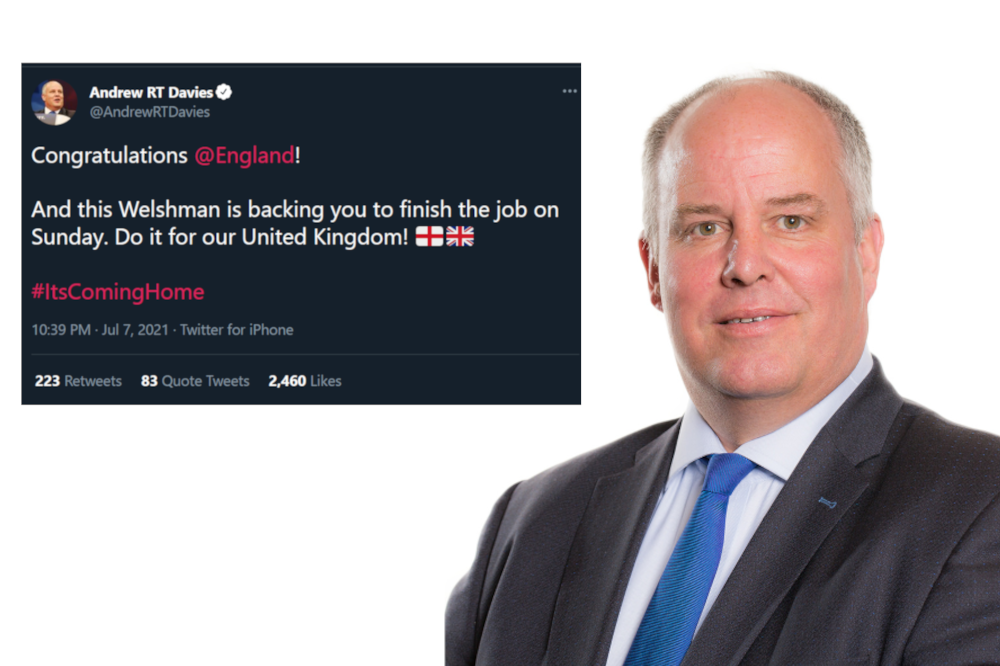 A briefing note to UK ministers is advising them to stop using the ‘It’s Coming Home’ phrase because of the annoyance it causes other nations.

While the guidance is aimed at English MPs, the phrase provoked a barrage of criticism when used by Welsh Conservative leader Andrew RT Davies in the moments after England qualified for the final.

And this Welshman is backing you to finish the job on Sunday. Do it for our United Kingdom! 🏴󠁧󠁢󠁥󠁮󠁧󠁿🇬🇧#ItsComingHome

The vast majority of comments came from Wales fans who were annoyed at his stance but included many supportive of his backing for the England team.

One response from Twitter user @NorthGwent blue said: “Wanting England to win or lose has nothing to with the Union, being British or hatred. It’s bloody football rivalry, the sooner you go back to what you do on Saturdays when there isn’t an opportunity for tub-thumping the better. You don’t stop being rivals when you choose.”

The UK Government advisory appears in a leaked email from the Department for Digital, Culture, Media and Sport.

The email states: “As stressed before, please do encourage your Ministers not to use ‘It’s Coming Home’ with the news media and social media.

“I know we’re swimming against the tide, but we know this does not go down well overseas — and strategically we need to do all we can to make ourselves welcoming to the football authorities when the UK and Ireland is scoping out a bid for the 2030 World Cup.”

The phrase is taken from the Euro 96 Lightning Seeds’ song, ‘Three Lions’, with lyrics written by David Baddiel and Frank Skinner.

Is there no bar too low for the odious RT to crawl under in the hope of self publicity and insinuating himself in to BJ’s ‘good books’.
I have long since given up asking myself if he gives a tinkers damn about Wales, as judged by his words and actions the answer is a resounding NO.
He cares only for himself and the Conservative and Unionnist Party.

A prime candidate for Order of the Brown Nose.

Honestly if they are saying it to each other, it doesn’t bother me in the slightest. They are excited and hopeful. Best of luck to them. And to Italy. I’m neutral. The despicable English media can stick their vile agendas, goading and sensationalising nonsense wherever their odious species traditionally sticks things. But for all the excited English fans who respect anthems, don’t let upset by people wanting black lives to matter and are nice to children who support the opposition, I say sing your song loud and proud. This is your time, not ours. To ReTweet I say clean that… Read more »

Doesn’t annoy me. They can sing what they want. England is no less foreign to me than anywhere else so what they get up to is their own business.

I am surprised that RT has an opinion about wendyball,I assumed that he was a rugger(only)man.

ReTweet is a pointless creature who would only like pointless elitist things like golf, polo, Henley Regatta or the Eton Wall Game (which I think is a sort of sodomy)

l know nothing about the Eton Wall Game,but golfpolo or the Henley Regatta are no more,or less,pointless than bando.

I do not know why this post is underlined.

“This does not go down well overseas”.

Forget about the rest of Britain. Again.

Can we dig a ditch, a sort of Corinth canal? From Chepstow to near Connah’s Quay?

I bang on about a border forest, Severn to Dee? Advertise it as a green breathing space?

Recent pro-union comments by Tory politicians on both sides of the border have been marked by a high degree of both naievete and desperation. ART’s use of the Euro final for that purpose is a prime example.