A Conservative Senedd Member has asked the Welsh Government to act on YesCymru stickers, calling them “littering and graffiti of the highest order”.

Clwyd West member Darren Millar was responding in a debate about the 100 foot Union Jack that is to be added to the UK Government’s tax office in central Cardiff.

“Can I ask you what action the Welsh Government is taking, if we want to talk about legal advertising, to address the proliferation of Yes Cymru stickers around the length and breadth of Wales?” he asked.

He added that “there appears to be no concern whatsoever being expressed by Members of the party that is raising this concern” about the giant UK flag about those.

“This is an affront to local communities; this is littering and graffiti of the highest order and needs to be addressed,” he said.

The First Minister Mark Drakeford responded that YesCymru stickers are “not a matter for the Welsh Government”.

Darren Millar’s comments come after a Tory MP also said that YesCymru couldn’t complain about the UK Government placing a 100 foot Union Jack on their own building while putting stickers everywhere.

In a call with journalists, Monmouth’s David Davies shot back when asked about a petition against covering a tax office in Cardiff with an enormous 100-ft high Union Jack, which has now received well over 18,000 signatures.

“The petition I understand is being pushed by Yes Cymru and I’m frankly sick of seeing Yes Cymru stickers being placed all over signs and buildings in Wales,” he said in comments recorded by the Western Mail.

Get used to it. There will be stickers, flags and marches until independence.

and there will also be plenty of us doing our best to keep our neighbourhoods free from litter, graffiti and illegal stickers

It seems the Conservatives believe our Senedd is no more consequential than a town council. Maybe focus on things that are within the purview of a national government?

Thanks for the reminder Darren….. I must order more stickers….. I’m nearly right out.

If Darren Millar spent more time supporting Wales rather than denigrating it, he might attract more respect. After all he’s spent his life in Wales, yet not once can I recall him being appreciative of Wales or its language.

He is a member of the Conservative and Unionist Party – what did you expect.?
Their values are simply not a good fit in Wales.

OOooh did we ‘trigger’ the little darling?
Grow a pair – you started the culture war – live with the results.

And I’m sick of seeing billboards advertising the Conservative Party in sports grounds in Clwyd West!

I’m going to order a thousand more stickers when I get home this evening!!

Well I went to buy some YesCymru this evening and they have sold out!!!!!!!

The oxygen of publicity folks. 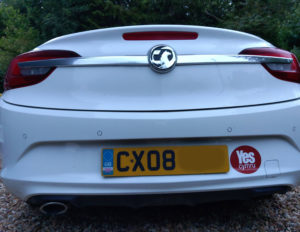 Looking carefully I would say that Mr Millar has got the worst teeth of any Tory I’ve seen recently, the party should have a whip round to improve his image. He uses the same sun cream as Andrew RT Davies..

Tories really do like to silence the voice of the public don’t they?

Maybe Darren should commission some Yes UK stickers im sure there will be plenty of people willing to stick them on top of the yes cymru stickers. I will drop him a line.

Ah, but would such stickers be classed as “littering and graffiti of the highest order”, or would it perhaps be more a middle-level order of same?

Good idea. Let me know if you get any. There are more of us than there are of them

Dear stickerers. From a Welshman who has been lived in Scotland for a good few years. Please stop and think about what you are doing before you drive our beautiful land into the same identitarian nonsense that is tearing Scotland apart. Trust me, this doesn’t end well for anyone.

Alistair
Reply to  A Smith

It seems that ‘cymru’ doesn’t even start with a capital letter.