The UK Government’s decision to freeze tax thresholds will cost the average family in Wales £370 a year by 2026, or a total of £500 million, analysis by the House of Commons Library has shown.

The figures show the cost to families of the UK Treasury’s decision to freeze the personal tax allowance at £12,570 and higher rate tax threshold at £50,270 until 2025/26, which the Liberal Democrats, who commissioned the research, say will “compound the growing cost of living crisis”.

London and the South East of England are expected to be the hardest hit, with losses of around £500 per household. The total cost to households across the UK, excluding Scotland, of the freezes will be £10.9 billion in 2025/26, it says.

The research is based on modelling using the latest inflation forecasts from the Office of Budgetary Responsibility, they said.

This means that throughout Wales, household disposable incomes are set to be 1 per cent lower in 2025/26 than they would be if there was no freeze to income tax thresholds, or £370 lower per household.

Chancellor Rishi Sunak has argued it would be irresponsible to “duck difficult decisions” on government finances.

Bt the Welsh Liberal Democrats said that the UK Government should drop the planned “stealth tax raid” in order to help families cope with rising energy bills and general inflation. This would mean that the tax thresholds increase in line with inflation.

“People are worried about the rising cost of living and paying their energy bills this winter. Now they face years of tax rises under a Conservative government that is taking them for granted time and time again.

“Making matters worst the Government is introducing a national insurance tax rise on top of this stealth tax and rapid energy price increases, doing so against the wishes of his own backbenchers in the Conservative Party.

“It is no wonder many lifelong Conservative voters from Aberconwy, to Powys, to Monmouthshire feel this government no longer represents them. Many of them are now turning to the Welsh Liberal Democrats instead.”

It was reported that Jacob Rees-Mogg told the Chancellor during Wednesday’s Cabinet meeting that the National Insurance hike should be scrapped in order to mitigate against the cost-of-living crisis as inflation and energy bills rise.

But speaking during a visit to a vaccination centre in Haywards Heath, West Sussex, on Thursday, Chancellor Rishi Sunak said: “I have enormous respect for all my colleagues and if you take a step back and look back at why we’re in this situation, it’s because we’re facing an unprecedented level of backlogs in the NHS and we as a Government don’t think it’s acceptable, we don’t want families to be waiting years and years to get the treatment they need.

“It’s always easy to duck difficult decisions but I don’t think that’s the responsible thing to do.”

The entire tax system in UK is an utter mess anyway. Faffing about with banding and allowances is all smoke and mirrors. people with real wealth are able to shield it from taxation using a whole barrage of approved devices without resorting to offshore havens and all the other nonsense that the uber rich deploy. The current cost of living crisis is a direct result of the neglect, negligence of the Tory regime and most of its Opposition who are quite content cocooned in their bubble in Westminster charging as much as they can get away with to expenses. No… Read more »

Note to editor – Thanks for restoring the comment. Still don’t understand why it was yellow carded in the first place.

Can you explain what reasons, if any, underpin the decision to delete my earlier comment. It may have become a bit of a rant ( not uncommon on these pages) but did not abuse anyone ( unusual on these pages !) just questioned the stances of government in London and its “minority partner” in Cardiff.

You stray too far from common thinking

Any attempt to enforce an orthodoxy will lead to revolt among those who retain a capacity for independent thinking. Too many people nowadays spend time within echo chambers that offer limited bandwidth. They end up victims of closed mind syndrome.

I don’t think orthodoxy comes into it. This one inexplicably disappeared for a week and could not be described as contentious. By the time it was reinstated, there seemed little point. 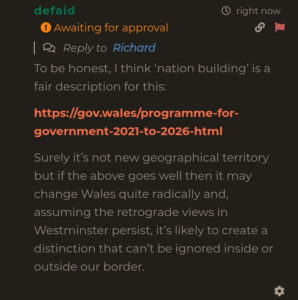 And why might you be to speak for ‘common thinking’?

The cost of living in every department is on the rise and the UK government is doing nothing to alleviate it. It only exists to support big business and in particular the big business in the City of London. We are stuck with them – for the moment – eventually through independence we’ll be shot of these cruel heartless people.